John Hammond Jr. was a wealthy American inventor and owner of Hammond Castle in Gloucester.

The castle housed not only his elaborate collection of ancient artifacts but also served as a laboratory where he and his team, which included scientist Andrija Puharich, conducted various telepathic experiments in the early 1950s.

From 1951 to 1952, Hammond, who had a fascination with the occult but was mostly known for his work with radio waves, conducted a series of experiments on a well-known psychic at the time, Eileen Garrett.

During the experiments, Hammond placed Garrett in a Faraday cage, a cage designed to keep out electromagnetic waves, to determine whether ESP used electromagnetic frequencies as a carrier wave.

According to the book, Color Healing: Chromotherapy, these experiments were funded by the Parapsychology Foundation:

“Science was represented by a team of top-drawer electronics physicists, headed up by John Hays Hammond. Parapsychology’s representative was Eileen J. Garrett, president of the foundation. The scientists undertook to devise assemblies of electro-magnetic instruments under conditions that would rule out any possibility of ether-waved telepathic or emotionally-conveyed contact between Mrs. Garrett, as the clairvoyant, and the science team. She was placed in a series of three Faraday cages, one inside the other…A scientist was stationed inside the cages with her. A tape recorder was placed in the inner cage, another was set up outside. A quarter mile away, a random switch to turn on and off an electrical current was placed in a hidden location.”

It is rumored that Hammond conducted these experiments in the castle’s Great Hall and that the cage became so hot due to the electrical currents running through it, the prolonged exposure to heat caused the dark stone floor beneath the cage to fade. This faded spot can still be seen today. 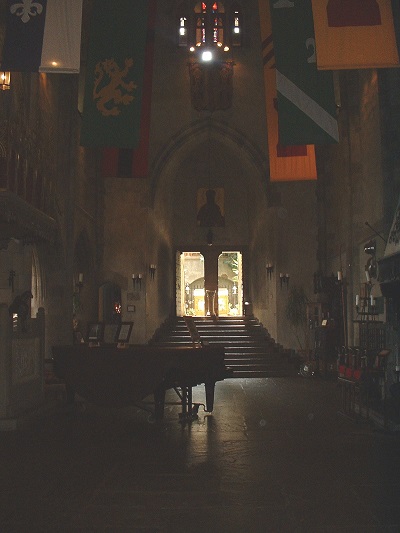 According to the book, Wizard: The Life and Times of Nikola Tesla, Hammond, who was a colleague and friend of Nikola Tesla, determined that since Garrett could still communicate telepathically with the science team through a series of ESP tests while she was in the cage, it proved that ESP was not transmitted on electromagnetic frequencies.

Hammond Castle Museum is located at 80 Hesperus Ave, Gloucester, Ma. The museum is open on Saturdays and Sundays from 10am to 4pm from spring (date varies) until late September. The museum also holds a haunted house tour in October (date varies).