Salem, Mass is an old fishing and farming settlement originally named Naumkeag, meaning “fishing place,” by the Native Americans who lived there.

In 1692, Salem residents were overcome by a hysteria which caused them to seek out and persecute “witches” they believed were working for the Devil. This later came to be known as the Salem Witch Trials.

The following is a timeline of the Salem Witch Trials:

1542:
♠ Parliament passes the Witchcraft Act of 1542 which is England’s first witchcraft law and makes the crime punishable by death.

1604:
♠ Parliament passes the Witchcraft At of 1604. The Witchcraft Acts of 1562 and 1604 transfer the trial of witches from the Church to the ordinary courts.

1626:
♠ Naumkeag is settled by a group of settlers led by Roger Conant, after they abandoned their original settlement in Gloucester. Conant serves as the settlement’s governor.

1628:
♠ John Endecott and a group of settlers from the New England Company arrive with a patent from England that gives them legal rights to Naumkeag. Conant peacefully surrenders control of Naumkeag to Endecott.

1629:
♠ Naumkeag is renamed Salem in honor of the peaceful agreement between Endecott and Conant.

1636:
♠ A small group of colonists settle an area just outside of Salem town which becomes Salem Village.

1641:
♠ In 1641, the General Court of the Massachusetts Bay Colony drafts the Body of Liberties which is modeled on the Witchcraft Law of 1604 and makes witchcraft, among several other crimes, a capital offense punishable by death.

1662:
♠ In 1662, Sir Matthew Hale solidifies the legal credibility of spectral evidence in witchcraft cases by allowing it in the Bury St. Edmund case in England, thus setting a precedent to be used at Salem in 1692.

1672:
♠ On October 8, 1672, Salem Village officially separates from Salem Town and is authorized by a General Court order to tax for public improvements, to build a meetinghouse for worship and to hire its first minister, James Bayley.

1679:
♠ By 1679, a number of Salem villagers turn against Bayley, accusing him of neglecting his church duties.

1682:
♠ In April of 1682, a parishioner writes to Burroughs complaining of widespread factionalism in the village, stating “brother is against brother and neighbors against neighbors, all quarreling and smiting one another.”

1683:
♠ In the spring of 1683, George Burroughs resigns his position as minister due to tension and factionalism within the congregation.
♠ On May 3, 1683, when George Burroughs temporarily returns to Salem Village to meet with the village committee and square his accounts, Captain John Putnam has him arrested for debt for failing to pay back advances on his salary (which he failed to do because the villagers stopped paying his salary all together.) The issue was eventually settled out of court.

1684:
♠ On October 23, 1684, the Massachusetts Bay Colony charter is revoked by King James II. In doing so, a number of laws that make it more difficult to accuse someone of a high crime, such as witchcraft, are nullified.
♠ In February of 1684, the Salem villagers hire Deodat Lawson to serve as the new Salem Village minister.

1687:
♠ In January of 1687, Job Swinnerton, Joseph Hutchinson, Daniel Andrew and Joseph Porter file a petition expressing grievances over the possible ordination of Lawson.
♠ In February of 1687, arbitrators from Salem Town side with the opponents of Deodat Lawson and encourage them to “desist at present the ordination of the Reverend Lawson till your spirits are better quieted and composed.”

1688:
♠ In 1688, Deodat Lawson resigns his positions as minister due to tension and factionalism within the congregation.
♠ In 1688, Mary “Goody” Glover is convicted of witchcraft for afflicting the children of John Goodwin in Boston. The symptoms that the Goodwin children experienced are well documented in a book by Cotton Mather, titled Memorable Providences, Relating to Witchcrafts and Possessions, and are later seen in the afflicted girls of Salem Village.
♠ In November of 1688, the Glorious Revolution of 1688 takes place in England and King William and Queen Mary become the new rulers of England in January.

1691:
♠ On October 16, 1691, at a town meeting, some residents of Salem Village begin to turn on Reverend Samuel Parris and vow to stop paying his salary.
♠ On October 16, 1691, in England, a new charter issued by King William and Queen Mary is approved which replaces the Massachusetts Bay Colony charter with one that establishes the Province of Massachusetts Bay. Sir William Phips is appointed the new royal Governor. The new charter places many restrictions on the colony, causing more tension amongst the colonists.

1693:
♠ In January of 1693, a new Superior Court, presided over by Deputy Governor Stoughton, meets in Salem. Stoughton prohibits the use of spectral evidence, which makes the testimony of the afflicted girls inadmissible.
♠ In January-February of 1693, 52 of the remaining accused are tried and Stoughton finds three of them guilty and adds them to the list of the other five witches awaiting execution. Governor Phips grants a stay of execution for the prisoners, upon advice from the attorney general to the King and Queen, which angers Stoughton.
♠ On February 16, 1693, several dissenters in the Salem Village congregation file a complaint against Reverend Samuel Parris stating they refuse to attend church while Reverend Parris is still minister due to his role in the trials. Parris spends the next few years embroiled in legal battles with the parishioners.
♠ On February 21, 1693, Governor Phips writes to the Earl of Nottingham, Secretary of State for King William and Queen Mary, explaining why he put a stop to any new witchcraft cases in Salem, disbanded the court of Oyer and Terminer and set up a new court to hear the remaining cases.
♠ On April 15, 1693, Queen Mary issues a royal letter, drafted by the Earl of Nottingham, to Governor Phip ordering that he stop all witchcraft trials.
♠ In May of 1693, Governor Phips receives instructions from England to end the trials and all proceedings. Phips issues a proclamation stopping all further court proceedings against accused witches and pardons the remaining accused in jail.
♠ On July 27 or 30, 1693, Governor Phips receives the letter from Queen Mary which confirms his decision to end the Salem Witch Trials.
♠ On July 31, 1693, Phips hosts a meeting of the General Council at his house and reads the letter from the Queen.

1694:
♠ Governor Phips is recalled to England to answer charges against him of misappropriation of government funds. He dies in 1695.

1696:
♠ In October of 1696, Samuel Parris is dismissed as minister of Salem Village.
♠ On June 10, 1696, Elizabeth Proctor becomes the first victim to petition the court to clear her name. The petition was ignored by the court.
♠ On December 17, 1696, out of concern that God is angry at the colony for putting innocent people to death, Acting Governor William Stoughton issues a proclamation for a day of fasting and prayer in the colony.

1700:
♠ On June 13, 1700, Abigail Faulkner becomes the second victim to petition the court to clear her name. The petition was not granted.

1704:
♠ In 1704, in a letter to Increase Mather, Reverend Michael Wigglesworth of Malden states that he fears God has placed a curse on New England for “what was done in the time of the witchcraft. I fear that innocent blood hath been shed, and that many have had their hands defiled therewith” and calls for a public acknowledgement of wrongdoing, a day of humiliation and restitution to the victims and their families.

1706:
♠ Ann Putnam, Jr, publicly apologizes for her role in the Salem Witch Trials.

1709:
♠ In 1709, twenty-two of the accused and/or their relatives filed a petition with the General Court to clear their names or the names of their loved ones.
♠ In the fall of 1709, Cotton Mather gives an election sermon to the General Court during which he urges the court to undertake reparations to make up for “the errors of our dark time, some years ago.”

1710:
♠ In 1710, prompted by the recent petitions and from pressure by Cotton Mather, the Massachusetts legislature appoints a committee to go to Salem and find out what more could be done for the victims of the trials and their families.
♠ In September of 1701, the committee makes a six-day visit to Salem during which it receives 45 petitions for redress with requests for restitution totaling 796 pounds.

1712:
♠ On March 2, 1712, the Salem Town Church votes in favor of rescinding the excommunication of Rebecca Nurse and Giles Corey.

1735:
♠ The Witchcraft Act of 1735 is passed in England which makes it a crime for a person to claim that any human being had magical powers or was guilty of practicing witchcraft.

1813:
♠ In 1813, the old Salem jail at 4 Federal Street, where many of the accused witches were imprisoned, is abandoned and a new jail is built nearby on St. Peter Street.

1863:
♠ In 1863, Abner Cheney Goodell purchases the old Salem jail, including the dungeon underneath, and remodels it into a home.

1921:
♠ In January of 1921, historian Sidney Perley writes an article, titled “Where the Salem Witches Were Hanged,” in the Historical Collections of the Essex Institute periodical in which he identifies Proctor’s Ledge as the site of the Salem Witch Trials executions.

1935:
♠ In 1935, historian Alfred Putnam Goodell, son of Abner Cheney Goodell, and his wife begin running the Old Witch Goal, in their home at 4 Federal Street in Salem, as a tourist attraction. Visitors tour the old dungeon, read an original unpaid bill for one of the accused witch’s upkeep, listen to lectures by guides, and see other exhibits.

1945:
♠ In 1945, Historic Salem, Inc. moves the Jonathan Corwin house about 35 feet to its current location, after it is threatened with demolition when North Street is widened, and begins restoring it to its seventeenth century appearance.

1947:
♠ On Memorial Day weekend in 1947, the Jonathan Corwin house opens to the public as a historical house museum, called the Witch House, on Essex Street in Salem.

1956:
♠ In 1956, the New England Telephone Company demolishes the house at 4 Federal Street in order to construct their new headquarters there. The old dungeon is discovered and two beams from the structure are donated to the Peabody Essex Museum.

1957:
♠ On August 28, 1957, the Massachusetts legislature apologizes for the events of 1692 and clears the name of “One Ann Pudeator and certain other persons.”

1970:
♠ In the fall of 1970, popular television show, Bewitched, airs several episodes about the Salem Witch Trials which were filmed in Salem, Mass. In the episodes, Samantha time travels back to 1692 and tells the Salem judges “The people that you persecuted were guiltless. They were mortals, just like yourselves. You are the guilty,” The episodes cause a surge in public interest in the trials and Salem soon becomes a popular tourist destination.

1972:
♠ In 1972, the Salem Witch Museum opens to the public in a former church at Washington Square in Salem.

1991:
♠ In November of 1991, town officials announce the winning design, by James Cutler, for a new Salem Witch Trials memorial. Playwright Arthur Miller gives a speech at the announcement ceremony and reads from the last act of “The Crucible.”

2001:
♠ On October 31, 2001, the Massachusetts legislature amends the 1957 apology and officially exonerates five victims not named in the 1711 bill or the 1957 apology: Bridget Bishop, Susannah Martin, Alice Parker, Wilmot Redd and Margaret Scott.

2016:
♠ In January of 2016, the Gallows Hill Project confirms that Proctor’s Ledge is the site of the Salem Witch Trials executions.

2017:
♠ On July 19, 2017, the Proctor’s Ledge Memorial is dedicated on the 325th anniversary of the hangings of Susannah Martin, Rebecca Nurse, Sarah Good, Elizabeth Howe, and Sarah Wildes. 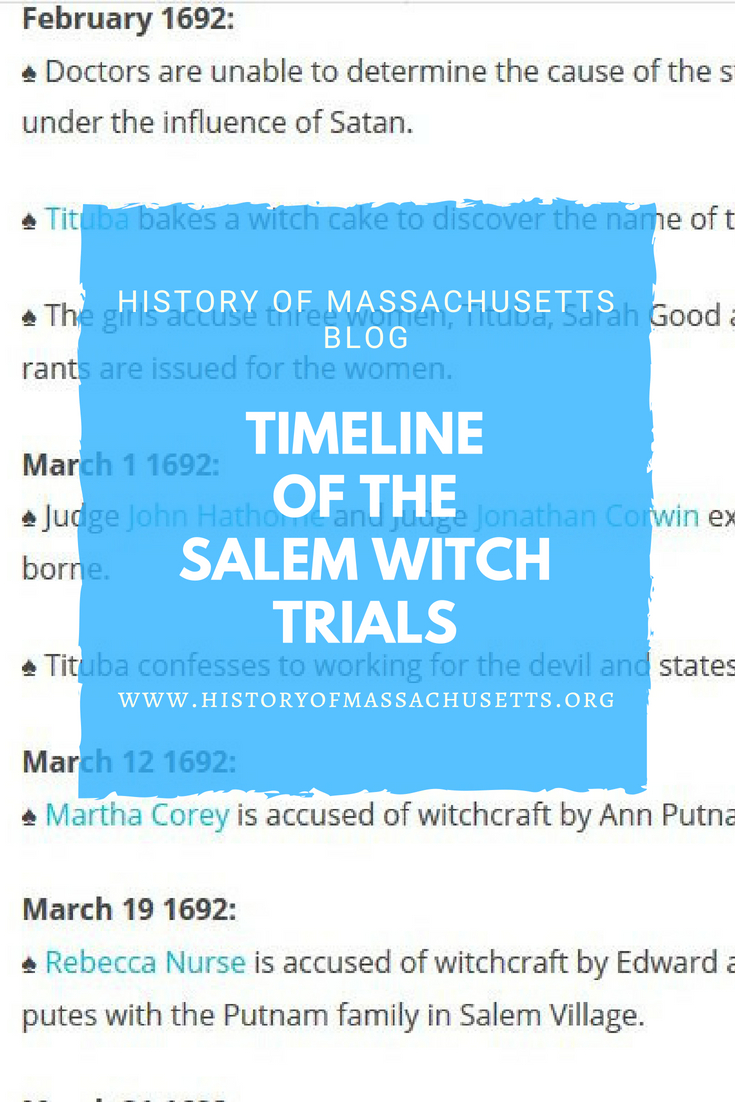 4 thoughts on “Timeline of the Salem Witch Trials”