Furthermore, the industrial revolution originated in Great Britain and spread across the world in three waves:

The following is a timeline and list of important dates of the industrial revolution:

1755:
♦ Professor William Cullen designs a small refrigerator machine at the University of Glasgow.

1764:
♦ James Hargreaves invents the Spinning Jenny, which allows workers to produce multiple spools of thread at the same time.

1769:
♦ James Watt patents his revision of the steam engine, which features a separate condenser. 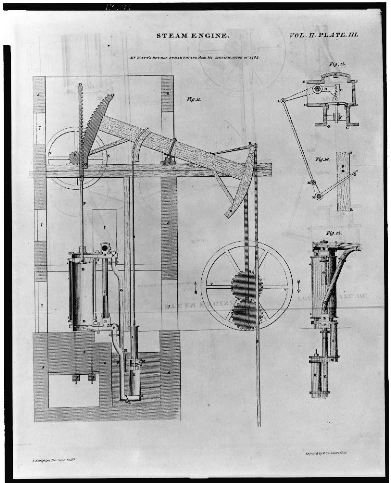 James Watt’s double steam engine from his specification of 1782, illustration from 1822

1779:
♦ Samuel Crompton invents the spinning mule, which combines spinning and weaving into one machine.

1787:
♦ Beverly Cotton Manufactory, the first cotton mill in America, opens in Beverly Massachusetts and is powered by horses.

1793:
♦ Eli Whitney invents the cotton gin which greatly increases the production of cotton. 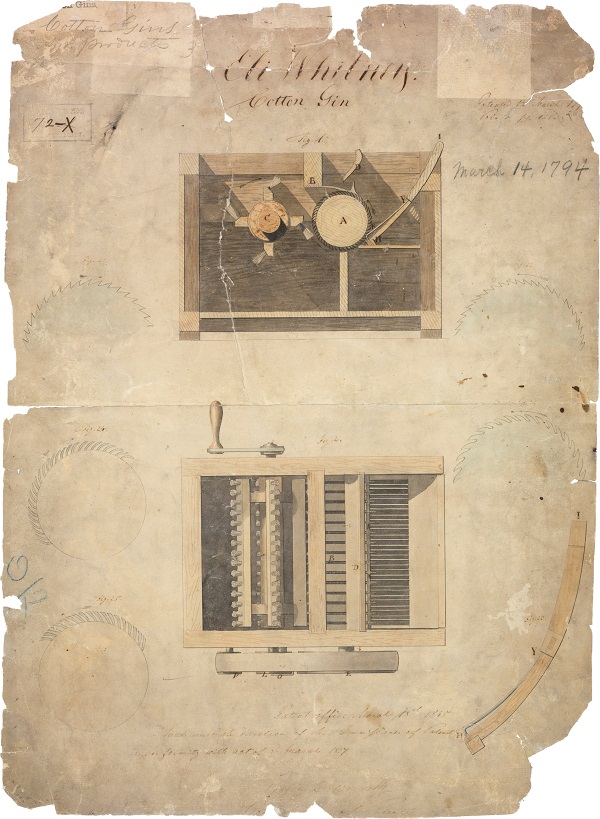 1799:
♦ Combination Acts makes it illegal in Great Britain for workers to unionize in order to bargain for higher pay or better working conditions.

1801:
♦ On December 24, 1801, Richard Trevithick test drives the world’s first steam-powered locomotive, called the “Puffing Devil” or “Puffer” on the streets of Camborne, England.

1805:
♦ American inventor Oliver Evans designs the first refrigeration machine that uses vapor instead of liquid to cool but never builds it.

1807:
♦ Robert Fulton opens the first public steamboat service in America on the Hudson River in New York.
♦ Embargo Act of 1807 in the United States cuts off imports from Great Britain, forcing American merchants to increase the amount of goods they manufacture.

1811:
♦ Luddite Rebellion begins in Great Britain. Luddites attack factories and smash machines in protest against the industry.
♦ American merchant, Francis Cabot Lowell, tours the textile mills in Great Britain and memorizes the designs of the power loom in order to improve textile manufacturing in the United States.

1812:
♦ Parliament passes a law making it illegal by penalty of death to destroy industrial machines.

1813:
♦ On January 16, 1813, fourteen Luddites are hanged at York Castle in England for the murder of manufacturer William Horsfall.
♦ Francis Cabot Lowell and several partners start the Boston Manufacturing Company in the United States and introduce an improved version of the power loom.

1814:
♦ The Boston Manufacturing Company builds its first textile mill in Waltham, Massachusetts and introduces the Lowell System, in which every step of the manufacturing process is done under one roof and is performed by adult women instead of children.
♦ George Stephenson patents a steam engine locomotive that runs on rails.

1822:
♦ The Boston Manufacturing Company starts the first large scale factory town in America and names it Lowell after company founder Francis Cabot Lowell, who died in 1817.

1825:
♦ George Stephenson commissions a 30-mile railway to be built from Liverpool to Manchester.
♦ The Erie canal is completed which opens a water route from the Great Lakes to New York City and the Atlantic Ocean.

1832:
♦ Sadler Committee investigates child labor in factories in Great Britain and issues a report to Parliament.

1834:
♦ Poor Law creates “poorhouses” for the destitute in Great Britain.

1835:
♦ On August 14, 1835, Jacob Perkins, now known as the “father of the refrigerator,” builds upon Oliver Evans refrigeration machine idea and patents the first vapor-compression refrigeration cycle.

1837:
♦ A blacksmith, John Deere, invents the steel plow in Illinois.

1844:
♦ Friedrich Engels publishes his observations of the negative effects of industrialization in his book The Condition of the Working-Class in England.
♦ Samuel Morse invents the telegraph, which allows people to communicate quickly over long distances.
♦ Charles Goodyear patents vulcanized rubber.

1848:
♦ The British government establishes the General Board of Health to investigate sanitary conditions, setting up local boards to ensure safe water in cities.

1849:
♦ 10,000 people die in three months in London from a Cholera epidemic caused by contaminated drinking water.

1853:
♦ Elisah Otis invents a safety brake for elevators. This paves the way for tall buildings and skyscrapers to be built.

1856:
♦ The Bessemer Process for making steel is invented by Henry Bessemer which allows for the mass production of inexpensive steel.

1870:
♦ The Elementary Education Act of 1870, aka Foster’s Education Act, in Great Britain makes school attendance mandatory for children between the ages of 5 and 10.
♦ Large scale industrialization begins in Japan.

1877:
♦ The Great Railroad strike occurs in the United States when railroad companies reduce wages.
♦ On February 12, 1877, Alexander Graham Bell publicly demonstrates the telephone for the first time at the Lyceum in Salem, Massachusetts by placing a phone call to the Boston Globe in Boston, Massachusetts.

1884:
♦ The Berlin Conference of 1884 paves the way for widespread colonization of Africa by European countries, such as Britain, France, Belgium, Spain, Portugal and Germany, who are in search of raw materials needed for industrialization and new captive markets to sell their goods to.

1891:
♦ Russia begins construction on the Trans-Siberian Railway, which eventually becomes the longest railway line in the world.

1918:
♦ In the Hammer v. Dagenhart, the United States Supreme Court rules that Congress has no power under the Commerce Clause to enact child labor laws.

1978:
♦ China begins to drastically industrialize by building millions of small-scale factories throughout the country, eventually becoming the second largest economy in the world.