If you’re looking for a child’s Paul Revere costume for a class project or a Halloween costume you have a few options to choose from.

Who Was Paul Revere?

Paul Revere was a Patriot and silversmith during the American Revolution who is best known for his famous midnight ride, during which he alerted colonial militia about British troops marching towards the town just prior to the Battles of Lexington and Concord. His deed was later immortalized in the poem Paul Revere’s Ride by Henry Wadsworth Longfellow.

In these illustrations, Revere is often depicted as wearing a blue or dark-colored coat, tan breeches and matching waistcoat, a black tricorne hat and either black riding boots or black shoes. 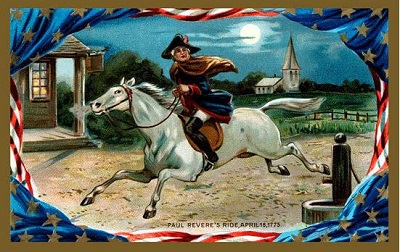 The costume that I found that most closely resembles this depiction is this Paul Revere Costume by California Costumes on Amazon.


This costume is made out of polyester and comes with a blue coat with an attached tan vest, a neck tie cravat, tan breeches, a black tricorne hat and a pair of elastic slip-over shoe buckles. Not included with the costume are the shirt, socks, shoes or lamp.

The costume perfectly matches the illustrations of Paul Revere on his famous midnight ride, right down to the blue coat and tan breeches.

Another famous image of Paul Revere is from the John Singleton Copley painting of Revere that was completed in 1768. In the painting, Revere is wearing a white linen shirt with no cravat and a blue-green waistcoat with gold buttons. 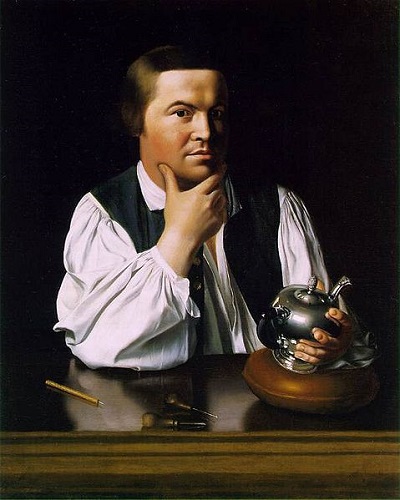 Portrait of Paul Revere by J.S. Copley, circa 1768

The costume that I found that most closely resembles this is this Paul Revere Costume by Forum Novelties on Amazon:


This costume comes with a green jacket with an attached white shirt and green vest, brown breeches with attached boot tops and brown tricorne hat. It’s not a perfect match for the Copley painting, mostly because in the painting Revere isn’t wearing a jacket, but it’s very close. The listing doesn’t say what type of fabric the costume is made out of but my guess would be polyester.

If you already have a partial Paul Revere Costume and only need certain accessories to complete it, you can always buy them separately.

Paul Revere is often depicted as wearing a black or dark-colored tricorne hat. This was a very popular hat in the colonies in the 18th century and is definitely a hat that someone of Paul Revere’s status would wear. You can buy a kid’s black Revolutionary War tricorne hat on Amazon.

Paul Revere didn’t carry a lantern during his famous midnight ride but he is often associated with lanterns and is sometimes depicted as carrying one because he had instructed two fellow patriots, Robert Newman and Captain John Pulling, to hang lanterns in the steeple of the Old North Church to warn other riders whether British troops were arriving on foot or by sea.

One of the lanterns hung in the steeple that night still exists and is now housed in the Concord museum where it is known as the “Paul Revere Lantern.” You can buy a similar lantern on Amazon.

Since many of the Paul Revere costumes for sale don’t come with stockings, you can buy a pair of men’s colonial socks separately.


With all of the resources I’ve included in this article, you should be able to find a great Paul Revere Costume for your class project, reenactment or costume party.