The primary sources of the American Revolution offer a wealth of information on this famous event.

These sources include official acts and proclamations as well as several books, diaries and letters written by the various people involved in the revolution.

These sources were written during the Revolutionary-era, between the years 1763 and 1783, as well as in the years following the revolution as the newly formed United States of America tried to find its footing.

The following is a list of online primary sources on the American Revolution:

This was a petition issued by the Continental Congress in July of 1775 to King George III as a last resort to avoid war between the colonies and the British government.

This was an official statement issued by King George III in August of 1775 declaring that the colonies were in a rebellion and pledging to use military force to suppress it.

♦ Library of Congress: Documents from the Continental Congress and the Constitutional Convention, 1774-1789: https://www.loc.gov/collections/continental-congress-and-constitutional-convention-from-1774-to-1789/about-this-collection/

This collection contains 277 documents about the drafting and ratification of the Constitution.

This database contains digitized issues of the Virginia Gazette beginning with William Parks’ earliest known issue from September 10, 1736 to the Clarkson & Davis’ last issue printed in Williamsburg on December 9, 1780.

This database contains digitized issues of various Boston newspapers and pamphlets collected by a Boston shopkeeper named Harbottle Dorr Jr. The materials in this collection were published between 1765 and 1778 in Boston and surrounding towns.

The database also includes a handful of pamphlets about various people and events of the American Revolution.

The materials were published between the years 1774 and 1776 and pertain to the American Revolution. Force later published the collection in a set of nine volumes that he called the American Archives. In 2001, Northern Illinois University digitized the volumes and published them online.

♦ Massachusetts Historical Society: Broadside about the repeal of the Stamp Act https://www.masshist.org/object-of-the-month/may-2016

This is a broadside, dated 16 May 1766, describing the reaction in Boston to the repeal of the Stamp Act.

♦ Teach US History: The American Revolution – List of All Primary Sources: http://www.teachushistory.org/Revolution/ps-contents.htm

This site has a collection of American Revolution-era documents dating from 1728 to 1789. The collection includes official documents, acts, proclamations, treaties, military reports, petitions, letters and memoirs on both the French and Indian War (which played a major role in the build up to the revolution) and the American Revolution.

This is a letter written by Paul Revere describing his experience during his famous midnight ride. The letter is undated and was written at the request of Jeremy Belknap who was the corresponding secretary of the Massachusetts Historical Society.

This is a deposition written by Paul Revere describing his experience during his famous midnight ride.

The deposition was probably written at the request of the Massachusetts Provincial Congress who were soliciting eyewitness accounts of the Battle of Lexington in order to prove that the British soldiers fired the first shot at Lexington.

Although Revere heard the first shots fired on the Lexington Green, a nearby house obscured his view of the skirmish.

This collection contains eyewitness accounts about the Siege of Boston. Topics includes the Battle of Bunker Hill, Battles of Lexington and Concord, the British evacuation of Boston, the fortification of Dorchester Heights, raids and looting during the siege as well as skirmishes and bombardments.

This collection includes a handful of letters, journals, newspaper articles, essays and petitions about the American Revolution.

This collection includes 150 books, pamphlets and prints about the origins of the American Revolution, the revolution itself as well as the early years of the United States of America as a republic.

This collection includes every available British and Irish pamphlet about the American Revolution that was printed in Great Britain between January 1st 1764 and December 31st 1783. The collection also includes related broadsides and controversial books.

The digital edition of the Adams Papers contains approximately 50 volumes of papers written by John Adams and his family that have been published via the Adams Editorial Project. The papers include letters, diaries, legal documents and autobiographies written by the Adams family between the years 1753-1840.

The George Washington Papers contains approximately 65,000 items, dating from 1745-1799. The papers include letters, diaries, and financial and military records from his time as a militia colonel during the French and Indian War, as a Virginia delegate in the first and second Continental Congresses, his role as general of the Continental Army during the Revolutionary War, his presidency of the Constitutional Convention in 1787 and his two terms as president (1789-1797).

The James Madison Papers contains approximately 12,000 items, dating from 1723-1859. The papers include letters, personal notes, drafts of legislation, an autobiography, legal and financial documents, and Madison’s notes on the 1787 federal Constitutional Convention.

The Thomas Jefferson Papers contains original Jefferson documents dating from the early 1760s until his death in 1826.

These papers consists mostly of his letters but also include his drafts of the Declaration of Independence, drafts of Virginia laws while he was a Virginia legislator and governor, public and personal documents from his time as a delegate in the Second Continental Congress and his time as a diplomat in France, Secretary of State and as President of the United States.

The papers cover everything from Hamilton’s childhood in the Caribbean to his experiences as a Revolutionary War officer and aide-de-camp to George Washington as well as his time as a New York legislator, United States treasury secretary and member of the Continental Congress.

The Georgian papers contains materials dating from the reigns of George I to William IV. The collection includes personal letters, diaries, account books and records of the Royal Household.

Also included in the collection are the papers of King George III, who ruled Great Britain during the American Revolution, and the De Budé collection, which consists of letters between General Jacob de Budé and King George III regarding various military matters such as the movements of French and American troops and ships in the colonies during the Revolutionary War.

♦ University of Michigan: Spy Letters of the American Revolution: http://clements.umich.edu/exhibits/online/spies/gallery.html 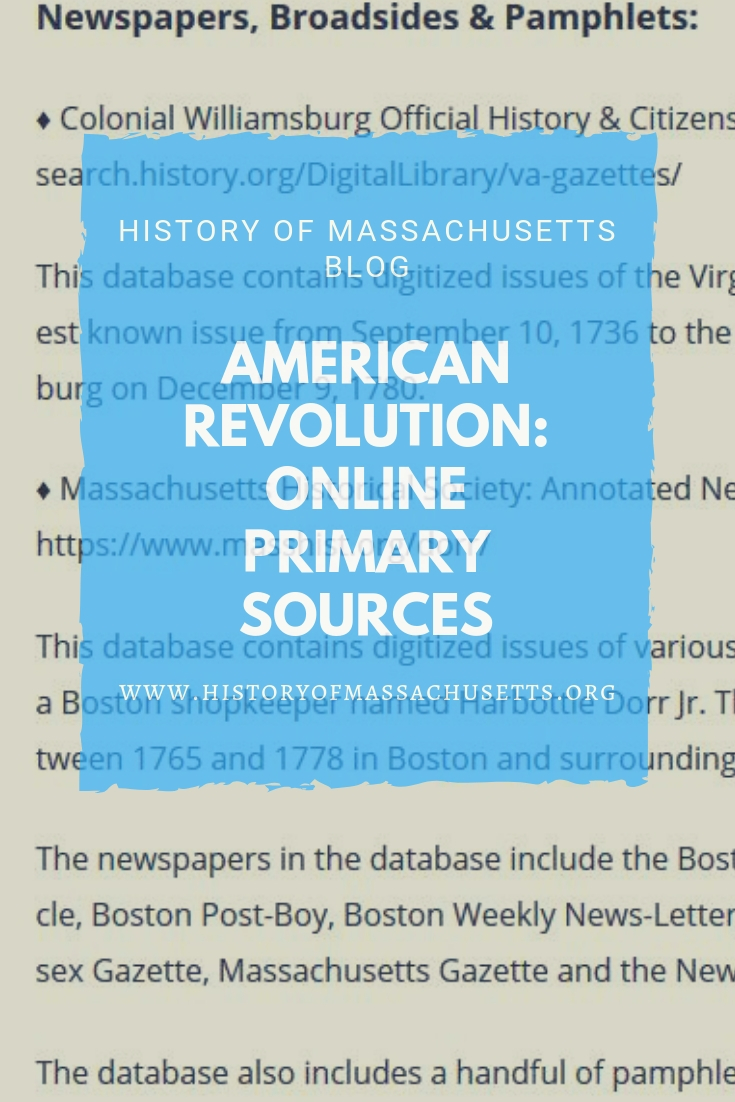