The American Revolution was a colonial revolt that began in Massachusetts in the 18th century.

The conflict, which took place between the years 1763 and 1783, was originally between Great Britain and the British North American colonies but later became a global war when France, Spain and the Dutch Republic joined in, resulting in the Anglo-French War (1778-1783) and the Fourth Anglo-Dutch War (1780-1784.) 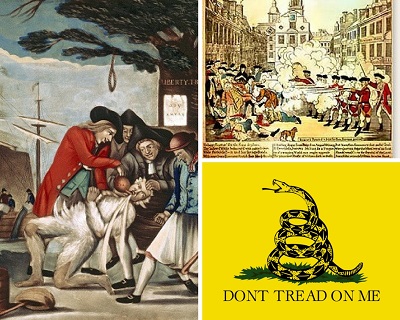 Who Fought in the Revolutionary War?

The various nations who fought in the Revolutionary War were:

When Did the American Revolution Take Place?

Where Did the Revolutionary War Take Place?

The Revolutionary War began in Massachusetts but the majority of the battles were fought in New York, New Jersey and South Carolina, with more than 300 military engagements occurring in these three colonies alone.

The Revolutionary War also spread to other countries and territories across the world, where it was known as the Anglo-French War and the Fourth Anglo-Dutch War.

Why Did the American Revolution Take Place?

The exact events that caused the American Revolution are still debated to this day.

Most historians agree that the American Revolution started out as a colonial revolt against the mercantile and economic policies of the British Empire in British North America.

This revolt was the result of years of growing tension between the colonists and the British government caused by the government’s attempts to assert more control over colonial affairs, specifically over trade and commerce.

The policy change came after the British government had long adhered to a policy of salutary neglect, during which the colonists were allowed to self-govern.

Salutary neglect came to an end when the Seven Years’ War, aka the French and Indian War, ended in 1763 and the government found itself in heavy debt due to the high cost of the war.

When the government began passing new laws and taxes in an attempt to make money off of the colonies to help pay off these debts, the colonists resented it and began to push back.

Since the colonists couldn’t vote for the Parliamentary officials that were enacting the new taxes and laws, they felt they weren’t being represented in the government, hence their motto: No taxation without representation.

The colonists had become accustomed to self-governing during salutary neglect and felt that the government didn’t have the authority to govern them anymore.

How Did the Revolutionary War Start?

The British tried to keep control of the colonies during the build up to the Revolutionary War by sending more troops to enforce the new laws and restore order but the presence of the British troops only escalated the conflict, causing a series of protests and riots.

This created a volatile situation in the colonies which finally came to a head in 1775 when British troops stationed in Boston were sent to Concord on the night of April 18, in search of the colonist’s hidden ammunition supplies, and encountered a small group of militiamen in Lexington early the next morning.

The two sides engaged in a brief battle, known as the Battle of Lexington, during which the militiamen were defeated. The British continued on to Concord.

In Concord, the British troops were confronted by hundreds of militiamen and minutemen at the Old North Bridge. A battle ensued, known as the Battle of Concord, during which the British were defeated and were forced to retreat back to Boston where they were blockaded inside the city in what is now known as the Siege of Boston.

What Happened During the Revolutionary War?

The British initially planned to first contain and then defeat the revolution in Massachusetts, which was the heart of the rebellion, but were unable to do so after suffering heavy casualties at the Battle of Bunker Hill in June of 1775.

They eventually lost control of Boston altogether when the Siege of Boston failed in 1776. The British then sailed to Nova Scotia in Canada to regroup.

Meanwhile, between the years 1775-76, the war spread from Massachusetts to upstate New York and then Quebec, Canada before spreading south to Virginia, South Carolina, North Carolina and then to New York City, New Jersey, Connecticut and Pennsylvania in late 1776 and 1777.

In 1778, the war became a global conflict when France joined the war as allies to the United States and engaged in a series of battles with Britain overseas and in the West Indies.

Also in 1778, the war spread to Rhode Island and Georgia, where military engagements then shifted entirely to the south when Britain revisited their Southern strategy, which was to occupy the South and focus their efforts on acquiring the help of southern loyalists.

In 1779, Spain joined the war as an ally of France and engaged in a series of battles with Britain in Florida, Louisiana and in the Mediterranean.

How Did the Revolutionary War End?

The British enacted their Southern strategy from 1778-1781 and began occupying the South, where they engaged in numerous battles in South Carolina, North Carolina, Georgia and Virginia, etc.

The British found though that they had overestimated the support of the loyalists in the South and discovered that their occupation of the south had the opposite effect and instead prompted many of the Southern colonists to side with the rebellion.

Furthermore, the British found the Southern terrain difficult to navigate and had trouble accessing reinforcements and supplies.

All of these factors culminated into a series of costly military losses for the British, which came to a head with the Patriot victory at the Battle of Yorktown in 1781.

With the loss of that battle and a widespread global war looming, Parliament decided the war was too costly to continue and voted to end it.

This sparked two years of peace talks between Great Britain and the United States which resulted in the Treaty of Paris of 1783.

“As to the history of the revolution, my ideas may be peculiar, perhaps singular. What do we mean by the revolution? The war? That was no part of the revolution. It was only an effect and consequence of it. The revolution was in the minds of the people, and this was effected, from 1760 to 1775, in the course of fifteen years before a drop of blood was drawn at Lexington.”

What Do the British Call the Revolutionary War?

2 thoughts on “History of the American Revolution”