If you want to learn more about American history you have countless books to choose from.

The problem is that most American history books focus on just a few topics, such as the American Revolution and the Civil War, while ignoring other topics that also helped shape American culture.

I’ve compiled a list of books on American history that I feel are must-reads for every history lover. I tried to keep the topics broad to provide a general overview of America’s history instead of focusing on a specific person or place.

These books on this list are considered some of the best books on American history and many of them are best-sellers. They also all have great reviews on sites like Amazon, Goodreads and etc.

In addition, I’ve used many of these books in my research for this site so I can personally recommend them as some of the best books on American history:

1. A People’s History of the United States by Howard Zinn

Published in 1980, this book challenges traditional historical narratives by focusing on the history of regular people instead of the elite, white men in positions of power that most history books zero in on.

The book tells the story of immigrant laborers, African-Americans, women, Native-Americans and the working poor. It argues that much of American history is about the majority being exploited by an elite minority.

The book covers everything from Christopher Columbus’s historic voyage to the present day and was last updated to cover events up until 2005.

The book has sold more than 2 million copies and, despite its success, it has its fair share of critics who say it is a biased, oversimplified work that focuses too much on class issues.

Many critics have labeled it agitprop (an amalgamation of agitation and propaganda) designed to push people towards political causes that Zinn favored.

However, author Eric Foner, who reviewed A People’s History of the United States for the New York Times in 1980, defended Zinn against his critics in an L.A. Times article that came out after Zinn’s death in 2010, stating:

“The idea that historians have to be neutral about everything they study is the death of history. Every historian has beliefs and feelings about what they’re studying. Howard made them very explicit. The teachers you remember are the ones with a passion for history who made it clear what they thought. They were not polemicists. They respected the canons of historical scholarship, as Zinn did, but they cared deeply.”

Howard Zinn, who died in 2010, was a historian, playwright and social activist. Zinn wrote many books such as his autobiography You Can’t Be Neutral on a Moving Train; The People Speak; and Passionate Declarations.

First published in 2005, this book discusses the events of the year 1776, which was a pivotal year during the American Revolution.

The book focuses on military events and explores the leadership of military and political figures such as George Washington, King George III, General Howe, Henry Knox and Nathaniel Green.

The book also addresses battles that happened that year such as the Battle of Dorchester Heights, the Battle of Long Island, and the Battle of Trenton. The book was written as a companion piece to McCullough’s notable biography about John Adams.

David McCullough is a Pulitzer-Prize winning author who has written many books about American history including John Adams; Truman; The Wright Brothers; The Great Bridge: The Epic Story of the Building of the Brooklyn Bridge.

3. Salem Witch Trials: A Day-By-Day Chronicle of a Community Under Siege by Marilynne K. Roach

Published in 2002, this book lays out the events of the Salem Witch Trials as they happened. Each chapter is dedicated to a specific month in the witch hunt, which began in January of 1692 and ended in May of 1693.

Since the Salem Witch Trials can be confusing and complicated sometimes and involved many events with many different people, this book is great at clearing up the confusion by spelling out exactly what happened and when.

Marilynne K. Roach is an author who has written many other books about the Salem Witch Trials such as Six Women of Salem: The Untold Story of the Accused and Their Accusers in the Salem Witch Trials and a children’s book titled In the Days of the Salem Witchcraft Trials. Roach is also a member of the Gallows Hill Project which, in January of 2016, officially confirmed Proctor’s Ledge in Salem as the location of the witch trial hangings.

4. Mayflower: A Story of Courage, Community and War by Nathaniel Philbrick

Published in 2006, this book tackles the many myths and misconceptions about the Mayflower pilgrims and Plymouth Plantation.

The book discusses the pilgrim’s relationship with the Native-Americans by highlighting how the local Wampanoag tribe were nearly destroyed by European diseases brought by the colonists and how the colonists captured and sold the Wampanoags into slavery during King Phillip’s War.

The book also explores the pilgrim’s image as peaceful and non-violent settlers by pointing out that they could actually be brutal and aggressive at times.

The book is split into two sections: the first half of the book discusses the settling of Plymouth Plantation while the second half discusses the events of King Phillip’s War. The book was named as one of the New York Times’ ten best books of the year and was a finalist for the Pulitzer-Prize in 2006.

Nathaniel Philbrick is an author who has written many notable books about American history such as Bunker Hill: A City, A Siege, A Revolution; In the Heart of the Sea: The Tragedy of the Whaleship Essex; and The Last Stand: Custer, Sitting Bull, and the Battle of Little Bighorn.

Published in 2001, this book tackles the traditional story of America’s colonial history by exploring the various cultures that helped make America what it is.

The book details how Native-American tribes, African slaves and even countries such as Spain, France and the Netherlands helped shape colonial America.

This book covers settlements and colonies from Canada to Mexico and dives deep into topics that are often ignored in most history books, such as the role the West Indies had in the 17th century economy, the Siberian migrations across the Bering Straits to North American over 15 millennia ago and the complex relationship between the various native people of North America and the many colonists.

Alan Taylor is a history professor at the University of Virginia and is a Pulitzer-Prize winning author who has written many books about American history such as William Cooper’s Town: Power and Persuasion on the Frontier of the Early American Republic and The Internal Enemy: Slavery and War in Virginia: 1772-1832.

Published in 1988, this book explores the whole of the Civil War, starting with the political, social and military events that led up to it, such as the Dred Scott decision, John Brown’s Raid on Harper’s Ferry and the Lincoln-Douglas debates, and continuing with the events of the war itself such as the battles, the military strategies and the people involved in the war. The book won the Pulitzer Prize in 1988.

James M. McPherson is the Professor Emeritus of United States History at Princeton University and has written many books about American history such as For Cause and Comrades: Why Men Fought in the Civil War; Crossroads of Freedom: Antietam 1862; and a children’s history book about the American Civil War called, Fields of Fury.

McPherson was also the president of the American Historical Association in 2003 and is a member of the editorial board of Encyclopedia Britannica.

7. 1491: New Revelations of the Americas Before Columbus by Charles C. Mann

Published in 2005, this book explores the history of civilization in the Americas before the Europeans arrived.

The book challenges the traditional view of the indigenous people of the Americas as primitive people by detailing their complex societies, expansive cities and engineering feats.

The book also discusses early American-European contact which was not, at first, about domination and oppression as most people believe but was instead more of a meeting of equals.

The book also explains that the reason the colonists found a large and underpopulated land when they first arrived was because of a disease epidemic, brought by European traders and explorers, that decimated the indigenous people in the Americas just prior to the colonist’s arrival and left much of the land open to settlement.

Charles C. Mann is a journalist and author who has written for such publications as Fortune, The New York Times, Smithsonian, Vanity Fair, Technology Review and the Washington Post. He has also written a sequel to 1491, titled 1493: Uncovering the New World Columbus Created.

8. Lies My Teacher Told Me: Everything Your American History Textbook Got Wrong by James W. Loewen

Published in 1995, this book explores the myths about America history that continue to be perpetuated even today.

The book examines twelve high school history textbooks and notes how they are filled with blind patriotism, misinformation and outright lies.

The book aims to fix these mistakes and covers everything from Columbus’s journey to the Americas and the First Thanksgiving, to 9/11 and the Iraq war and explains how teachers should teach history by skipping history textbooks and diving deeper into specific topics.

James W. Loewen is an author who has written many books about American history such as Lies Across America: What Our Historic Sites Get Wrong and Teaching What Really Happened: How to Avoid the Tyranny of Textbooks and Get Students Excited About History.

Hopefully, these books will give you a clearer understanding of American history and help dispel some of the many myths and misunderstandings about it while also teaching you something new. 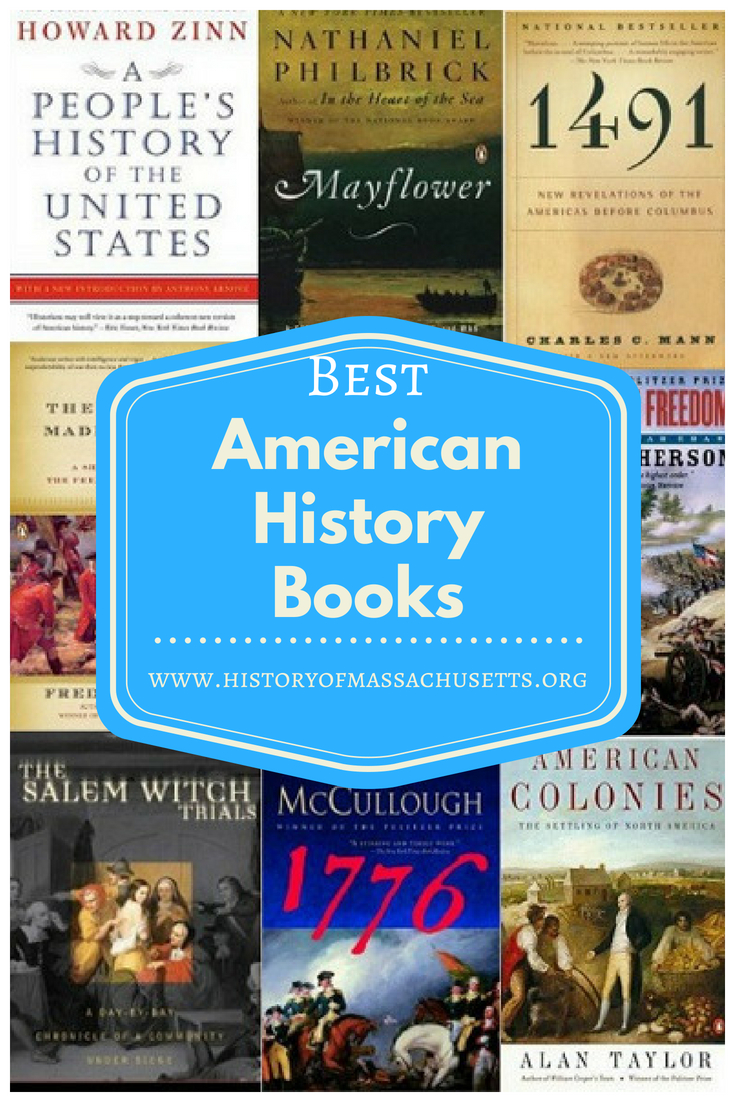