There are surprisingly far fewer books on the French and Indian War than other American wars.

This is mostly because the French and Indian War is often overlooked in favor of other wars like the Revolutionary War and the Civil War, which are considered bigger, more dramatic and nobler stories.

Yet, many of the authors listed in this article argue that the French and Indian War is just as important as the Revolutionary War, if not more so, because it created the many factors that eventually led to the Revolutionary War and they suggest the revolution would have never happened without it.

In addition, many of these books also support Winston Churchill’s theory, which he wrote about in the third volume of his book The History of the English-Speaking Peoples, that the French and Indian War, which was a part of the Seven Years’ War, was actually the first world war because it featured many of the world’s most powerful countries battling each other around the world for the first time in history.

It’s not surprising then that the subject matter has made for some very passionate and well-written books. The books on this list are considered some of the best books on the French and Indian War. They are best-sellers on the topic and all have great reviews on sites like Amazon and Goodreads.

Some of the books listed in this article cover the entire span of the war while others only focus on a specific time or place in the war. The list includes novels as well as nonfiction:

1. Montcalm and Wolfe by Francis Parkman

Published in 1884, this book is one of the oldest yet still one of the best books about the French and Indian War and has remained in print ever since its publication.

The book explores the war through a deeply personal conflict between French General Louis De Montcalm and British General James Wolfe, who were two opposing generals in the war. The book also contains over 40 detailed maps and illustrations of battles, land surveys and etc.

Parkman used a lot of firsthand, unpublished materials in his meticulous research for the book, including General Montcalm’s personal letters which he obtained from his ancestor, Marquis Montcalm. He also used documents from archives and libraries in England and France, the Public Record Office and the British Museum in London, and personal letters, diaries and other writings from various sources in America.

Parkman, who died in 1893, was an author who has written many history books including The Oregon Trail: Sketches of Prairie Mountain Life as well as his seven volume series France and England in North America. Montcalm and Wolfe is the sixth book in that series and is often regarded as his masterpiece.

Parkman was a direct descendant of Puritan minister John Cotton and was a trustee of the Boston Athenaeum, which is one of the oldest independent libraries in the United States, until his death at the age of 70 years old.

Parkman has plenty of critics though who argue that he was a racist and sexist writer who was anti-Indian and anti-democracy, among many other things. Despite his political views, he was still considered a great writer and a great storyteller.

2. Crucible of War: The Seven Years’ War and the Fate of Empire in British North America, 1754-1766 by Fred Anderson

Published in 2000, this book has often been described as one of the quintessential books about the French and Indian War.

The book discusses how the French and Indian War, which was a part of the Seven Years’ War, forever changed North America and helped build and then ultimately destroy the British empire.

The book argues that the French and Indian War was significant because Britain’s victory over France in the war led to a bitter rivalry between the two countries that would later come back to haunt Britain in the American Revolution. In addition, it also created a large land empire in North America that ultimately was too much for Britain to handle.

Anderson argues that if it had not been for the French and Indian War, the American Revolution would have either been delayed, would not have happened at all or would have still been fought but would not have resulted in the birth of a new nation.

Anderson is a professor of history at the University of Colorado and is the author of five books about American history including his newest book The War that Made America: a Short History of the French and Indian War.

3. The War that Made America: A Short History to the French and Indian War by Fred Anderson

Published in 2006, this is another book by Fred Anderson. This book is a more scaled down version of the war and was written as a companion piece to a 2006 PBS documentary of the same name.

The book explores how the war undermined the Native American’s independence, destroyed the French empire in North America, overturned the balance of power between England and France on two continents and sparked the American Revolution.

4. Empires at War: The French and Indian War and the Struggle for North America, 1754-1763 by William M. Fowler

Published in 2005, this book explores the personal and political dynamics behind the war and theorizes that the French and Indian War was the original first world war because it pitted the world’s most powerful countries against each other in various battles around the world.

The book also argues that the war was a turning point in American history because without it the American Revolution might not have occurred.

Fowler is a professor of history at Northeastern University and served as the director of the Massachusetts Historical Society from 1998 to 2005. He is the author of many books about American history including The American Revolution: Changing Perspectives and Under Two Flags: The Navy in the Civil War.

Published in 2010, this book focuses on the events of the French and Indian war, as well as the Revolutionary war, in New York State, explaining that the state of New York was a literal battlefield for many years in the 18th century.

The book discusses the battles that took place in that region and also explores the heavy toll it took on the area and the people who lived there.

Berleth, who passed away in 2013, was an author who wrote numerous other history books such as Twilight Lords: Elizabeth I and the Irish Holocaust; Marry Patten’s Voyage and a popular children’s book called Samuels Choice.

6. The Last of the Mohicans by James Fenimore Cooper

Published in 1826, this historical novel is set in 1757, during the French and Indian War, in the wilderness of upstate New York.

The story is about how a woodsman named Hawkeye and his Mohican friends become entangled in the French and Indian War.

The novel’s theme is about the eradication of the Native Americans and their way of life in New York. In 1936 and 1992, the book was adapted for the big screen. The 1992 film was a box office success that received much praise from critics and audiences alike.

Cooper, who died in 1851, was a former sailor with the U.S. Navy and later became an author. He wrote many historical novels including the Leatherstocking Tales, a five-part series about the frontier period, and began his writing career with a novel titled The Spy, which was about counterespionage during the American Revolution. The Last of the Mohicans is considered by many to be his masterpiece.

Published in 1937, this book is a two-part novel that follows the exploits of Robert Rogers, the leader of the Roger’s Rangers, which were a colonial force fighting alongside the British during the French and Indian war.

The first novel focuses on the rangers raid on the Abenaki village of St. Francis in Quebec while the second novel focuses on Roger’s later life in both London, England and at a military fort in Michigan. In 1940, the book was adapted to the big screen and starred famed actor Spencer Tracy.

Roberts, who died in 1957, was a journalist who became well known for his work for the Saturday Evening Post and later became a novelist who specialized in historical fiction. Roberts other novels include Arundel; The Lively Lady; and Oliver Wiswell; which all take place during specific battles and wars in American history.

8. White Devil: A True Story of War, Savagery and Vengeance in Colonial America by Stephen Brumwell

Published in 2004, this book also explores the story of Robert Rogers and his infamous raid on the Abenaki village of St Francis in Quebec, which earned him the nickname the White Devil from the Abenaki people.

The brutal raid was Rogers’ retaliation for the British massacre at Fort William Henry, a tragic event that was also memorably depicted in the novel The Last of the Mohicans.

This book explores the exact events of the St. Francis raid and also tries to answer why Rogers targeted St. Francis in the first place, two points that Brumwell argues many historians often avoid due to the sensitive nature of the topic.

In doing so, Brumwell attempts to give a voice to the often voiceless Abenaki and also tries to document a Native American culture that, for centuries, has remained undocumented except through its own oral tradition and through the biased perspective of the non-native people they encountered.

Brumwell is a British author and freelance writer who has written many books about American history including Paths of Glory: The Life and Death of James Wolfe; Redcoats: The British Soldier and War in the Americas; and George Washington: Gentleman Warrior.

9. The French and Indian War: Deciding the Fate of North America by Walter R. Borneman

Published in 2006, this book discusses the events of the French and Indian war and explores how it set the stage for the American Revolution just a few decades later.

The book argues that the war not only gave Britain ultimate power over North American but it also created a British empire that ruled the world for two centuries.

Borneman argues that the empire was ultimately undone when Britain began taxing the American colonists due to the high cost of the French and Indian War which angered the colonists and eventually sparked the American Revolution.

Borneman is an author who has written many books about American history including 1812: The War That Forged a Nation; Macarthur At War; and American Spring: Lexington, Concord and the Road to Revolution.

Published in 1962, this book also argues that the French and Indian War was the first world war.

The book discusses the chronological events of the war as well as the events that led up to it, starting with the massacre at Schenectady in 1690 and continuing through King William’s War, Queen Anne’s War and etc.

Russell, who died in 1989, was an author who wrote many books about American history, including Warren G. Harding: The Shadow of Blooming Grove and Boston 1775. Russell was a bit of a controversial figure who often disagreed with other historians over the claims he made in his books.

One such claim was that he had solved the infamous Sacco-Vanzetti murder case and also claimed that Warren G. Harding was of African-American descent, which has since been proven to be false.

The books in this article should help you gain a better understanding of the French and Indian War and the effect it had on the Native Americans, the colonists, Britain, France and the many other forces involved. 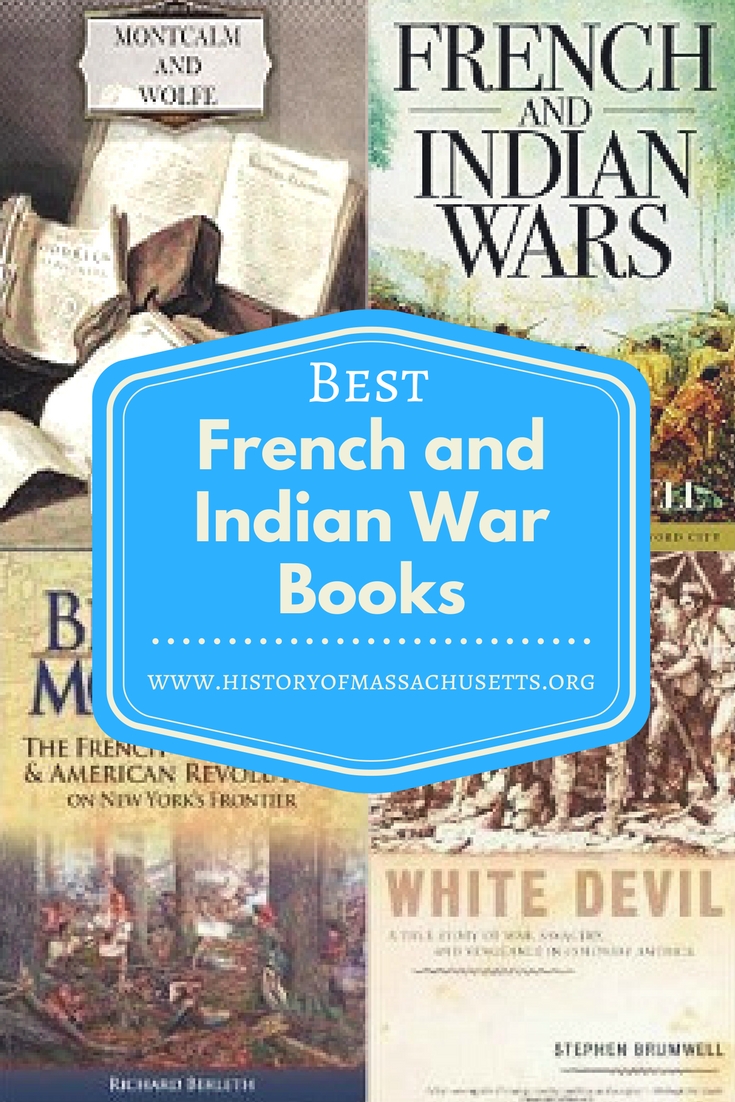