The French and Indian War, which took place between 1754-1763, was a conflict between Great Britain and France over control of the Ohio River Valley.

The French and Indian War later became a global war when it spread to Europe in 1756 and nearly every European great power at the time joined in, which resulted in the Seven Years War (1756-1763.)

Who Fought in the French and Indian War:

The various nations who fought in the French and Indian War were:

The various nations who fought in the Seven Years War were:

When Did the French and Indian War Take Place?

Where Did the French and Indian War Take Place?

The battles of the French and Indian War occurred in the following places:

The battles of the Seven Years War occurred in the following places:

Why Did the French and Indian War Take Place?

The reason why the French and Indian War took place was because both the British and the French claimed the Ohio River Valley as their own territory, which is the present-day location of six states: Ohio, Pennsylvania, West Virginia, Kentucky, Illinois and Indiana. 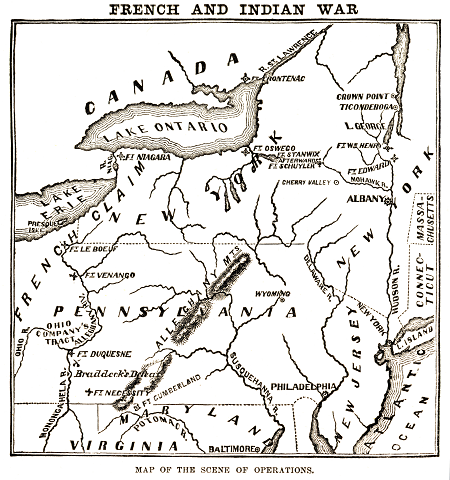 Map of the scene of operations of the French and Indian War, published in Harper’s Encyclopedia of United States History, circa 1905

The area had a number of valuable resources such as a vibrant fur-trading industry as well as access to the Ohio River, which was a vital transportation corridor for the region.

In addition, the two countries also disagreed about the location of the Nova Scotia boundary and also quarreled over ownership of the St. Lawrence River, according to Alfred A. Cave in his book The French and Indian War:

“Since France and Great Britain were both determined to press their claim to the Ohio valley (which included much of western Pennsylvania), were at odds over ownership of much of the St. Lawrence watershed (which extended far into New York), and disagreed about the location of the Nova Scotia boundary, with Britain claiming portions of the adjoining mainland, conflict was unavoidable.”

Yet, the bigger issue at hand in this dispute was ultimately control of the North American continent. Both countries wanted to expand their colonies there in an attempt to gain control of the continent, according to William M. Fowler, Jr., in his book Empires At War: The French and Indian Struggle for North America:

“The war pitted the world’s two superpowers, France and England, against each other in a titanic struggle for imperial domination. This was hardly the first time the French and English had grappled. Ancient enmities going back at least to 1066 had often driven these two nations to conflict, but this time the struggle was not about the usual familial claims to thrones or who should control some petty duchy or principality or even who would dominate the continent of Europe. It was a competition to determine who would dominate the other continents of the world.”

How Did the French and Indian War Start?

The French and Indian War began after a series of events in 1753 when the British ordered the French to abandon Fort LeBoeuf, which the French had built in the Pennsylvania area, because the British claimed it was located on British land.

The French refused to leave the area, claiming it was actually French land, and then also took over a nearby British fort, called Fort Prince George, and renamed it Fort Duquesne.

British troops, led by a young George Washington, were sent out to the fort and clashed with a French and Indian scouting party, in what is now known as the Battle of Jumonville Glen, after which a number of surrendering French soldiers were slaughtered.

What Happened in the French and Indian War?

After the Battle of Fort Necessity in 1753, the fighting moved to Canada, when the British seized Acadia the following year, before spreading to other areas in North America, such as New York, Virginia and other parts of Canada.

The war in North America settled into a stalemate for the next several years but, in 1756, it spread to Europe after British ally, Prussia, invaded French-ally, Saxony. This later prompted various countries across Europe, such as Spain, Sweden, Austria and Russia, to join in on the war effort, which became known as the Seven Years’ War.

After 1758, the war began to turn in Britain’s favor as British officials began to spend more money on the conflict and and British forces invaded and conquered Canada, defeated the French in India and celebrated a series of victories in Germany, the Caribbean, West Africa and on the high seas.

After the negotiations failed, the King of Spain, Charles III, offered his assistance to his cousin, the King of France, Louis XV, and on August 15, 1761, they signed an alliance known as the Family Compact.

The terms of the alliance stated that Spain would declare war on Great Britain if the war did not end before May 1, 1762, in an attempt to pressure Britain into peace negotiations, and it pledged mutual military assistance and support against Great Britain in the war.

The treaty, which was intended to be secret, was leaked to the British and quickly prompted Great Britain to declare war on Spain on January 4, 1762.

The British continued to have success in the war and British forces seized the French Caribbean islands, Spanish Cuba, and the Philippines.

How Did the French and Indian War End?

The capitulation of Montreal to the British on September 8, 1760 ended the French and Indian War in North America, although fighting continued in Europe for a few more years.

In 1762, after a failed Spanish invasion of British ally, Portugal, fighting ended in Europe.

By 1763, the British, French and Spanish began peace negotiations which resulted in the Treaty of Paris in 1763.

Britain was awarded a significant amount of land in North America including all French territory east of the Mississippi River, as well as Spanish Florida, but Britain also had to return Cuba to Spain.

The French and Indian War and Its Aftermath:

The Treaty of Paris primarily benefited Great Britain and resulted in France losing all of its territory east of the Mississippi River and all of Canada to the British, thus bringing the French Empire to an end in North America, and also caused Spain to lose a major piece of its colonial land to the British when it had to give up Spanish Florida.

This bred resentment on the part of the French and Spanish and spurred France to later seek revenge against Britain in the Revolutionary War, according to Fred Anderson in his book Crucible of War:

“Unlike every prior eighteenth-century European conflict, the Seven Years’ War ended in the decisive defeat of one belligerent and a dramatic rearrangement of the balance of power, in Europe and North America alike. In destroying the North American empire of France, the war created a desire for revenge that would drive French foreign policy, and thereby shape European affairs, for two decades…”

The French and Indian War and the American Revolution:

The cost of the war led to a massive war debt for the British that they found themselves unable to pay off and also created a need for additional troops in North America to protect their newly won lands.

In order to raise these funds, the British government began enacting a series of new taxes in the colonies to raise revenue.

The new taxes were met with resistance from the colonists, which later escalated into a full-blown rebellion, known as the American Revolution, which then led to the Revolutionary War in 1775.

Both of the French and Indian War and Revolutionary War greatly affected Massachusetts in the 18th century.

Why Is It Called the French and Indian War?

Wars in British America were often named after the ruling British monarch at the time, such as King William’s War or Queen Anne’s War.

Since there had already been a King George’s War in the 1740s during the reign of King George II, the British colonists named the war after their opponents, the French and the Indians.

1 thought on “History of the French and Indian War”