Are you planning a trip to Salem and can’t figure out which historical tour to take? There are a number of great tours in Salem but only a limited amount of time to do them in.

With so many Salem historical sites to see, it’s hard to know where to start. Guided tours are a great solution to this problem because they bring you to all of the important sites and tell you everything you want to know.

Tour guides can often answer any questions you may have while keeping you entertained at the same time.

Some of these historical tours listed here are only available for a limited time in October while others run almost year round. Most of these tours cost less than $20 and the majority of them are walking tours.

In addition to these local tours, if you live in or are visiting nearby Boston, you also have the option of taking one of the many Salem tours from Boston. 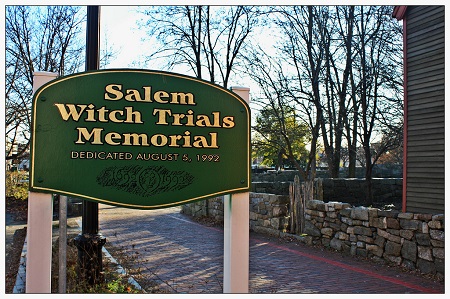 The following is an overview of all the historical tours available in Salem, Massachusetts:

The 1692 Witch Trials Walking tour takes you to the Salem Witch Trial locations including existing locations and ones long forgotten. This 1 hour tour begins at 4:30pm daily.

The company also offers Specialty Tours at 11am which includes a Religious History tour, an African-American tour, a Book Talk Book Walk Tour, a T.V. & Movie Tour and an Architecture tour.

The Salem Trolley Tour is another great way to see the sights in Salem without a lot of walking. Some of the trolleys are also wheelchair accessible.

The tour is a one hour narrated historical tour of Salem with same day shuttle service (shuttle service on weekends in October is not always possible.) The eight mile long ride takes you past the Old Burying Point, the House of Seven Gables, the Witch Dungeon Museum, the Salem Witch Museum, the historic waterfront area and etc.

The driver and tour guides provide interesting tidbits and facts about Salem. Riders are allowed to get on and off at any of the 13 stops throughout the day, using the trolley as a shuttle service.

The Salem Trolley Tour also offers a night-time Tales and Tombstones tour, from July-October, at 6pm each night on Saturdays and Sundays (as well as Thursday & Fridays in October.) The tour discusses Salem’s notorious murders and executions, ghosts stories about Salem’s haunted hotels, restaurants, islands and ghost ships as well stories about the secret tunnels that run underneath the city.

All tours depart from the company’s office at 8 Central Street and are approximately one hour. Tickets for all tours can be purchased online or in person the day of the tour.

The Downtown Smugglers’ Tour is led by the author of the book Salem Secret Underground: The History of the Tunnels in the City and it discusses the secret tunnels built underneath Salem in the early 19th century. The tour includes exclusive photos of the secret tunnels and a visit to two of the sealed tunnel entrances (the tour guide lifts the covers and lets you look inside.)

The Historic Salem Commons Smugglers’ Tour discusses the history of Salem Commons which used to be the town swamp, where colonists watered their animals, but later became a public park.

The tour includes exclusive photos of the common over the years as well as photos of the secret tunnels around the common that helped transform the landscape of the common. Both tours are 80 minutes long and take place Friday-Monday at 8pm and Thursdays at 4pm and meets at the Old Town Hall.

The Salem laughing tour explores the irony of Salem’s history. The tour starts in downtown Salem, passes by the common and ends at the waterfront. This 50 minute tour takes place Thursday-Monday at 6pm.

The company highly recommends purchasing tickets in advance either online or by phone since the tours often sell out.

Bewitched After Dark offers the Bewitched Historical Tour. The tour is led by Salem native Jeff Page and discusses the history of the Salem Witch Trials, Salem’s colonial history and modern-day witchcraft. The tour runs daily, days and evenings, from March-December.

This two hour tour departs from the Bewitched in Salem store located on the pedestrian walk at 180 Essex Street in Salem. Tickets must be purchased online in advance.

The Legendary History of Salem tour is led by author and historian Roy Raven and it explores Salem’s vast history, including the history of Salem’s shipping industry and the Salem Witch Trials. Each tour includes a complimentary Salem souvenir.

The Pirates and Privateers Walking Tour is led by history buff Lisa Roberts and it discusses Salem’s pirates and privateers. The tour includes a complimentary shot glass souvenir. This 60 minute tour departs from the Gallows Hill Museum/Theater at 7 Lynde Street at 5pm. Dates for this tour are Mondays & Wednesdays Oct. 5, 7, 12, 14, 19, 21, 26, 28.

The Gallows Hill company also offers a combo ticket that allows you to watch their 45 minute Witchcraft & Ghost experience show at the Gallows Hill Theater before taking the tour.

Black Cat Tours offers a Daytime Historic Tour which discusses topics like Salem’s maritime history, the Salem Witch Trials and the American Revolution as well as famous authors who have lived in or visited Salem.

The daytime tour starts at 2pm and lasts about 1 hour to 1 hour 30 minutes. Tickets are available online or you can purchase them in person the day of the tour.

The Salem Night Tour discusses the legends and history of the Salem Witch Trials. The tour takes you to important cemeteries, churches and houses in Salem’s history.

Reservations are required during the month of October and the tour company suggests you buy tickets as soon as possible since the tours sell out weeks in advance.

The tour begins at the Remember Salem store, located on 127 Essex St every night at 8pm (except in October when the tours meet every day at 3pm, 6pm, 8pm and 9:30pm.)

Spellbound Tours offers a Voodoo, Vampires and Ghosts Tour which they advertise as a historically accurate paranormal tour the delves into the history of the Salem Witch Trials.

The sites visited during the tour are all locations from the Salem Witch Trials and are also reportedly haunted. The sites include a house that is reportedly the most haunted home in America and the Old Burying Point where the Salem Witch Judge John Hathorne is buried.

The tour also explores the theory that one of the accused witches, Tituba, was actually a voodoo practitioner and that voodoo may have played a large role in the Salem Witch Trials.

This tour is 1 hour 30 minutes long. The company recommends that you purchase tickets in advance online, as tickets often sell out, particularly in October.

The tour has 15 stops which includes the old Salem jail, the Salem Witch Trials memorial, the field where Giles Corey was pressed to death and the Old Burying Point in Salem.

Tours meet at the Museum Place Mall and take place year round. The company recommends that you purchase tickets in advance online.

The Salem Time Machine offers a walking tour called the Walking Ghost Tour. The company states this tour is a historically accurate ghost tour that explores Salem’s notorious past.

The company recommends that you purchase tickets for the tour ahead of time because they tend to sell out. They also offer a combo ticket that allows you to take the ghost tour and experience their 4-D Haunted Adventure or 4-D Haunted House.

Walking Tours are held in the evenings from May-October. From May-September the tours are 1 hour 15 minutes long and in October they are 45 minutes long.

This 45 minute tour takes place Fridays-Sundays in October at 10am, 2pm and 4pm. The tours meet at the Essex Heritage Desk at the National Park Service Visitor Center at 2 New Liberty Street in Salem. Tickets may be purchased online or in person on the day of the tour.

The Witch City Walking Tours offers a Hauntings & History walking tour led by local elementary teacher and certified historian Beth Crowley. The tour groups are small so Crowley can take the time to get to know each guest and spend time answering questions.

This two-hour tour combines history, hauntings, witch trials and architecture and explores all the little ins and outs of the city. 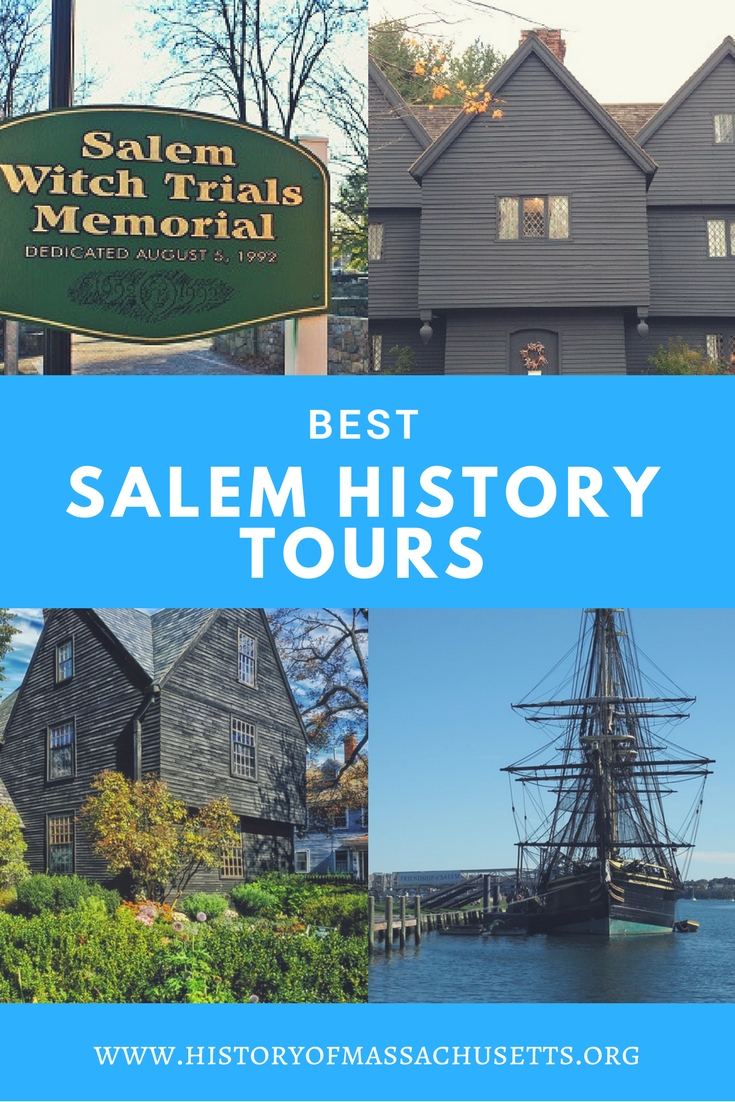 If you are interested in sightseeing in Salem, check out this article on the Salem Heritage Trail.