In October of 2008, a local historian determined four gravestones that had been propped up against a tree in Lakeville for many years came from an unknown location.

After a search of the nearby area, investigators later discovered that the gravestones had been moved from a nearby plot of land that was once a Native American burial ground but is now a housing development.

Equally disturbing, the investigators believe that although the gravestones were moved, the graves were not.

The two headstones and two foot stones belonged to brothers Thomas and William Smith. The Smiths were direct descendants of Tuspaquin, a 17th century sachem and brother of Massasoit, the Wampanoag leader who befriended the Mayflower pilgrims and attended the First Thanksgiving in Plymouth.

Upon discovery of the gravestones, investigators also learned that one of the foot stones was missing. It was recovered six months later in a nearby home, after police received a tip about its location. 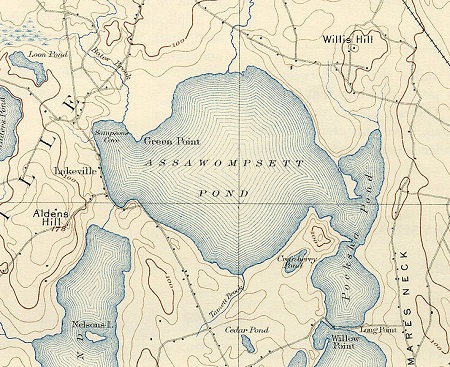 Map of the Lakeville area, circa 1893

The stones were English-style gravestones, not traditional Native American field stones, which marked the graves of the two brothers who died in the 1870s.

The local historian who determined the gravestones had been moved, Kenneth C. Leonard, said in an interview with the South Coast Today newspaper that the headstones are an early example of Native Americans borrowing from English tradition.

According to Leonard, the burial ground where they were originally located, known as the Indian Shore Cemetery, consisted of three burial mounds, one of which was destroyed, possibly by bulldozers during construction of the Nachaomet Road housing development in 1998. The burial mounds are now located in a resident’s front yard.

Wampanoag representative Earl Mills Jr., who was interviewed by the South Coast Today, stated he believed the disturbance of the graves was intentional:

“These stones were carefully moved, knowing that there was a burial there and placed around a tree and the burials obviously were in the way. And they weren’t disinterred and re-interred they were just plowed through. Somebody did this wittingly.”

According to an article in the Boston Globe, a local developer who worked with the construction company that built the housing development denies that they moved the stones or knowingly built the development on top of the burial ground, claiming the area must have been cleared before the development was built.

Chairman of the Lakeville Historical Society, Brian Reynolds, told the Boston Globe that the cemetery commissioner in 1980 informed him that it was a local gravel company, which built a number of gravel pits near the burial ground in the 1800s, who moved the stones.

Since the burial ground was located in 2008, the cemetery commission has held a series of meetings with the representatives of the Wamponoag nation.