The Mayflower is one of the most important ships in American history.

This cargo ship brought the pilgrims to Massachusetts during the Great Puritan Migration in the 17th century.

These pilgrims were some of the first settlers to America after they established the Plymouth colony. This journey made the Mayflower an icon of European colonization.

The following are some facts about the Mayflower:

Who Was the Captain of the Mayflower?

Around 1608, Jones purchased the Mayflower and became its Master, what we would call a captain today, but he was only a quarter owner of the ship. The other owners were Robert Childe, Thomas Short and Christopher Nichols. 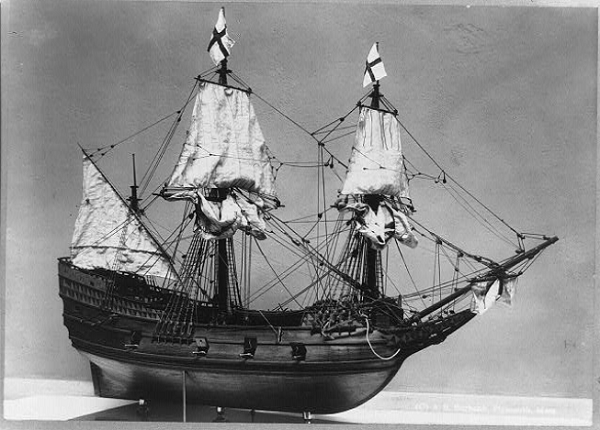 Model of Mayflower ship at Pilgrim Hall, Plymouth, Mass, circa 1905

The Mayflower was a European cargo ship in the years before its voyage to the New World with the pilgrims. Jones’ first voyage on the Mayflower was to Norway in 1609 where the ship transported fish, lumber and tar. The ship began leaking during a storm on the way back to England and the crew had to dump some of its cargo overboard to save it.

Jones never ventured into the North Sea with the Mayflower again and instead went back and forth between France and Spain delivering wine, cognac and vinegar, according to the book Mayflower: A Story of Courage, Community and War:

“The Mayflower was a typical merchant vessel of her day; square-rigged and beak bowed, with high, castlelike superstructures fore and aft that protected her cargo and crew in the worst weather, but made beating against the wind a painfully inefficient endeavor. Rated at 180 tons (meaning that her hold was capable of accommodating 180 casks or turns of wine), she was approximately three times the size of the Speedwell and about one hundred feet in length.”

The Pilgrim’s Voyage on the Mayflower:

In May of 1620, religious separatists known as pilgrims hired Jones and his ship to take them to the mouth of the Hudson River in North America where they had been granted permission to build a colony.

The Mayflower set sail from England along with another ship, the Speedwell, on August 15, 1620. The Speedwell leaked so badly that both ships had to return to England.

A few weeks later, the pilgrims all boarded the Mayflower and it set sail alone from Plymouth, England on September 16, 1620.

Although the Mayflower was a large ship measuring about 80 feet in length and 24 feet wide, the 102 passengers on board led to cramped conditions. The Mayflower had three decks, an upper deck, a gun deck below it and the cargo hold at the bottom.

The pilgrims lived on the gun deck, which was about 5 1/2 feet in height, and would sometimes venture upstairs to the upper deck during calm weather. The 37 crew members and the captain lived in cabins at the back of the upper deck.

Only a few of the crew’s names were recorded but they included a cooper named John Alden, ship surgeon Giles Heale and Pilots and Master’s Mates John Clarke and Robert Coppin.

The first half of the voyage was smooth with sunny skies and fair weather. The passengers were healthy and there were even three pregnant women on board. One of the women, Elizabeth Hopkins, gave birth on the Mayflower to a son that she named Oceanus.

About halfway into the journey, the Mayflower ran into bad weather. A series of storms caused the ship to leak and the main mast to crack. The pilgrims worried the ship would not be strong enough to make it America. The crew managed to fix the beam and fill some of the leaks. 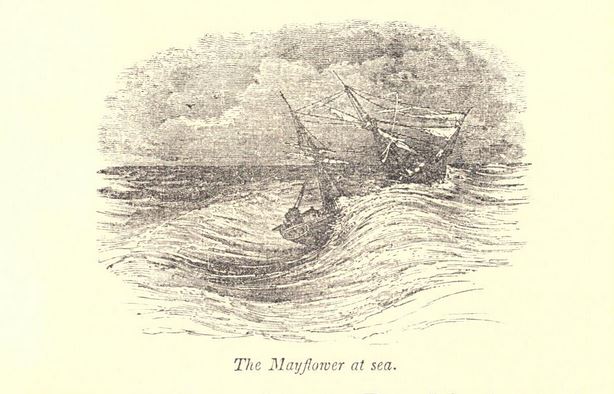 “Mayflower At Sea.” Illustration published in Pictorial History of the United States circa 1852

The constant cold and dampness on board began to take a toll on the pilgrim’s health. By the time the pilgrims reached America many of them became ill and one young boy, William Butten, an indentured servant to Samuel Fuller, died just a few days before reaching land.

When & Where Did the Mayflower Land?

The passengers sighted shore on November 9. Although the pilgrims had intended to land in northern Virginia, when they reached the shore they realized they were in New England.

Nonetheless, after 66 days at sea, the pilgrims were relieved to see land, according to Bradford in his manuscript Of Plymouth Plantation:

“…after long beating at sea they fell with that land which is called Cape Cod: they were not a little joyful! After some deliberation amongst themselves and with the master of the ship, they resolved to sail southward to find someplace about Hudson’s river for their habitation. But after they had sailed that course about half a day, they fell amongst dangerous shoals and roaring breakers, and resolved to bear up again for the Cape, and thought themselves happy to get out of those dangers before night overtook them. Being thus arrived in a good harbor and brought safe to land, they fell upon their knees and blessed the God of heaven, who had brought them over the vast and furious ocean, and delivered them from all the perils and miseries thereof.” 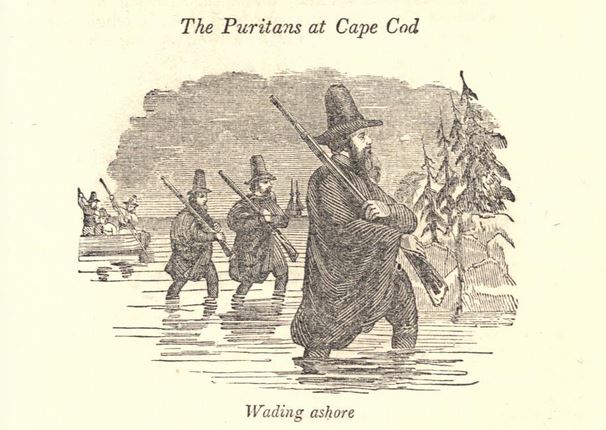 “Wading Ashore.” Illustration published in A Pictorial History of the United States circa 1852

With winter approaching and a short supply of food and beer, they decided to go no further and dropped anchor off the coast of Cape Cod in Provincetown harbor.

While the ship was anchored in the harbor, the passengers drew up a social contract known as the Mayflower Compact that established a set of rules and laws for the colony.

In December, after some skirmishes on land with the local natives, the pilgrims decided to pick up anchor and sail to nearby Plymouth harbor where they reportedly landed near Plymouth rock in mid-December.

What Happened to the Mayflower?

The Mayflower crew spent the winter with the pilgrims in Massachusetts, living on the ship, and sailed back to England on April 5, 1621 and arrived on May 6, 1621.

Christopher Jones passed away the following year, on March 5, 1622, and his widow, Josian, inherited the Mayflower.

In May of 1624, the ship was appraised for the purpose of probate and was described by the appraisers as being “in ruinis.” As a result, it is believed that the Mayflower was eventually broken up and sold off as scrap.

27 thoughts on “History of the Mayflower Ship”