James Russell Lowell was a U.S. Diplomat, poet and editor who had a longstanding feud with Henry David Thoreau that lasted well after Thoreau’s death.

Although Lowell was not the only one at the time who disliked Thoreau, who was not a greatly admired writer during his lifetime and was often overshadowed by his friend Ralph Waldo Emerson, he often went out of his way to criticize him in print, such as in his anonymously published poem “Fable for Critics” from 1848, in which he mocked Thoreau and suggested he was a poor imitation of Ralph Waldo Emerson:

“There comes [Thoreau], for instance; to see him’s rare sport,
Tread in Emerson’s tracks with legs painfully short;
How he jumps, how he strains, and gets red in the face,
To keep step with the mystagogue’s natural pace!
He follows as close as a stick to a rocket,
His fingers exploring the prophet’s each pocket.
Fie, for shame, brother bard; with good fruit of your own,
Can’t you let Neighbor Emerson’s orchards alone?”

Despite his low opinion of Thoreau, when Lowell became editor of the newly established Atlantic Monthly Magazine in 1857, he still asked Thoreau to contribute something to the publication. 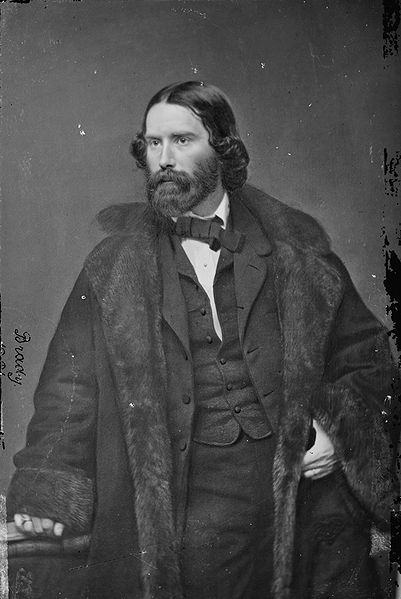 Thoreau responded by sending him his account of his 1853 trip to Maine, titled “Chesuncook,” which Lowell published in installments in the summer of 1858.

Things quickly turned sour when Thoreau noticed that Lowell omitted a line about the immortality of a pine tree from the second installment. Furious, he fired off an angry letter:

“I do not ask anybody to adopt my opinions, but I do expect that when they ask for them to print, they will print them, or obtain my consent to their alteration or omission…I am not willing to be associated in any way, unnecessarily, with parties who will confess themselves so bigoted & timid as this implies.”

The letter probably did very little to improve Lowell’s opinion of Thoreau, yet he still published the final installment of Thoreau’s essay that August.

Bitter and angry, Thoreau refused to contribute to the magazine again while Lowell was still editor.

Not willing to leave well enough alone, a few years after Thoreau died of tuberculosis in 1862, Lowell wrote a scathing essay about him in the North American Review in October of 1865, according to the journal American Periodicals:

“The battle lines were drawn in 1865 when the North American Review published James Russell Lowell’s vitriolic analysis of Thoreau’s mind and character and so poisoned Thoreau’s reputation in that magazine for the rest of the century that it scarcely referred to him in its pages again. Nominally a review of Emerson’s edition of Thoreau’s Letters to Various Persons, Lowell’s essay ridiculed the Transcendentalist movement as typical of an age ‘of intellectual and physical dyspepsia,’ an age in which ‘everything was to be common but common sense.’ The Transcendentalist fixation on the self duped Thoreau, a young man of ‘the narrowest provincialism,’ to develop ‘so high a conceit of himself’ that he perceived his defects as virtues, his weaknesses as powers. As a writer, Lowell continued, Thoreau lacked the fundamental gifts: imagination, critical ability, spontaneity, originality, logic and humor. While Thoreau prescribed for everyone the forest cure, sneered Lowell, his ‘whole life was a search for a doctor.’ Only on occasion, he concluded, did Thoreau demonstrate the qualities of genius his sponsors praise.”

A possible explanation as to why Lowell continually attacked Thoreau can be found in an article in The New Republic, which suggests that Lowell’s criticism of Thoreau was motivated by his own vanity, feelings of superiority and his determination to damage Thoreau’s legacy.

Ironically, despite his best efforts to destroy Thoreau’s reputation, it’s Lowell’s legacy, not Thoreau’s, that has faded over time:

“Lowell, confident that history would remember his own legacy, was not alone in accusing Thoreau of misanthropy, nor in predicting that posterity would put him in his place, as history had put his spiritual ancestors, the Puritans, in theirs. But it is Lowell, the once-influential Harvard professor, whom history has forgotten, and Thoreau has been promoted to the equal of Emerson, and the tutor of Leo Tolstoy, Mohandas Gandhi, and Martin Luther King, Jr., and the perennial ally of the unemployed.”