Jonathan Corwin was a judge in the Salem Witch Trials of 1692. He was also Judge John Hathorne’s brother-in-law and Sheriff George Corwin’s uncle.

Jonathan Corwin was born on November 14, 1640 in Salem, Massachusetts to Captain George Corwin and Elizabeth Herbert. The Corwins (or Curwen as it was spelled in England) descended from a distinguished English family of notable magistrates and court officials and were direct descendants of Sir Gilbert Culwen II, a knight with King Edward I, according to the book The Worthies of Cumberland:

“No family can well claim a longer pedigree than the Curwens, and few much nobler blood in England. If a knightly ancestry originating in the Saxon kings and chiefs of the Crusades, subsequently strengthened by Gospatric, the Great Earl of Northumberland, and Waldeof, first Lord of Allderdale; if Officers of State, and the companions of kings – in court, and camp, and tented field – are calculated to claim the attention of posterity…then assuredly the Curwens of Workington Hall should hold their own in history. The important position held by the Curwens in Cumberland will be best judged of by the fact that eight of ten of the family in successive descent were ‘Knights of the Shire.’ The Curwens figured as High Sheriffs, when scions of the royal house, earls, and bishops served in the same office throughout England…Sir Thomas Curwen and his brother were attached as boys to the court of Henry VII, and educated in part with Prince of Wales, afterwards Henry VIII.” 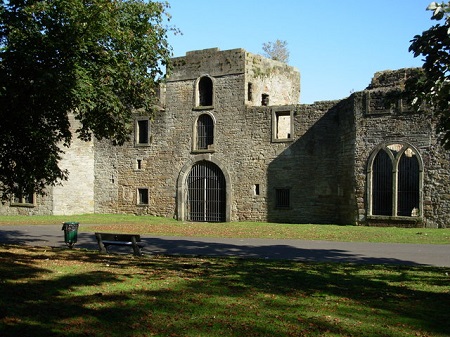 The Corwin family originated from the Northwest part of England, near the Scottish border, from an area called Cumberland.

The ruins of the Corwin family’s ancestral home, Workington Hall, still stands today in Cumberland. Originally built as a Pele tower in 1362, Workington Hall was expanded into a castle around 1404 and later served as a manor court during the 17th century.

As a puritan, Captain George Corwin had a distaste for Quakers. In 1656, he discovered two Quakers aboard his ship, the Swallow, which was anchored in Boston Harbor.

Corwin had the Quakers arrested, inspected for any marks indicating they were witches (it was believed at the time that anyone who wasn’t a puritan was probably a witch) and then sent them back to the ship to be deported.

After Jonathan Corwin came of age, he followed in his father’s footstep and became a merchant in Salem and then a court official, according to the book A Storm of Witchcraft: The Salem Witch Trials and the American Experience:

“Jonathan Corwin first appeared destined to be minister, for he entered Harvard at age sixteen, but he left after two years and followed the path of his father, a wealthy merchant who held many civil and political offices. Jonathan first served as a deputy to the General Court in 1684. Edward Randolph included Corwin on a list of men suitable to fill vacancies on Andros’s council, but he never served. It is unknown if he would have accepted had he been asked, though his brother-in-law William Browne Jr joined the council in 1688. Corwin took a real leadership role in the colony with the overthrow of Andros [after the Glorious Revolution in England led to the Boston Revolt of 1689], serving first on the Council of Safety and then as an assistant. He too was named a councilor in the 1691 charter.”

On February 11, 1674, Corwin purchased a partially finished house in Salem from Captain Richard Davenport. The house later came to be known as the Witch House due to Corwin’s connection to the Salem Witch Trials. The house still exists and is now a historic house museum in Salem. 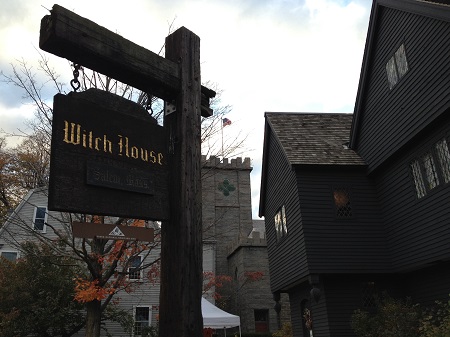 In 1674, Jonathan Corwin also met the newly widowed Elizabeth Sheafe Gibbs, a wealthy woman from a notable family of judges and merchants.

“John, Margaret, Jonathan and Herbert: death, death, death and more death. What pain and hurt must have seared the parents. What doubts and concerns these deaths must have raised – especially coming so soon after the cumulative losses of King Phillip’s war and the death of Colonel Robert Gibbs [Elizabeth Sheafe Gibb’s first husband]. With multiple deaths at home and within the Corwin family, and additional significant stresses outside the home, the stage would be set for 1692. Some of the larger colonial concerns in the 1680s included fear of loss of English charter, repression of colonial freedoms under Sir Edmund Andros and news of renewed Indian wars in Maine.”

In April of 1690, Governor Simon Bradstreet chose Jonathan Corwin and John Hathorne to conduct a fact-finding mission in New Hampshire and Maine due to complaints that the Council of Safety in Boston was not providing enough troops to prevent Indian attacks there.

In early May, after the visiting the area, Corwin and Hathorne sent a report to the council advising that the soldiers there be more vigilant against security threats to prevent surprise attacks, send out frequent scouts, reduce the number of garrisons in order to increase the number of soldiers within each garrison and to attack the Indians when the opportunity arose such as at their known fishing places or elsewhere.

The advice proved too little too late because just a few weeks later, local Native-Americans, with the help of French soldiers from Canada, waged a brutal attack on the settlement of Casco, Maine, ultimately destroying it. Many colonists died and many houses were burned to the ground. The battle sparked months of intense fighting in the region.

When the Salem Witch Trials began in the spring of 1692, Jonathan Corwin and John Hathorne served as judges during the pre-trial examinations. On June 13, 1692, after Judge Nathaniel Saltonstall resigned from the Court of Oyer and Terminer, which was a special court set up specifically to hear the Salem Witch Trial Cases, Corwin was appointed as his replacement.

Although there is no proof that this happened and it seems unlikely since these pre-trial examinations often drew large crowds, it is possible that it happened.

According to court records, one of Jonathan Corwin’s children was afflicted during the Salem Witch Trials. Corwin was the only judge who had a member of his family afflicted in 1692 and his child was the first child afflicted outside of Salem Village. This issue came up during the first day of Tituba’s examination on March 1, 1692, when Hathorne asked Tituba why she hurt “Mr. Currin’s [Corwin’s] child.”

[Hathorne]: Did not you hurt Mr Currin’s child?
[Tituba]: Goody Good and Goody Osburn told that they did hurt Mr. Curren’s child and would have had me hurt him two but I did not.

Whatever the affliction was, since the topic was only raised as an offhand remark during Tituba’s examination, it didn’t appear to be a pressing issue and nothing else came of it.

Corwin’s family became entangled in the Salem Witch Trials again later on when his mother-in-law, Margaret Thacher of Boston, was accused of witchcraft. The book In The Devil’s Snare states that “Mistress Thacher was … accused of witchcraft in 1692, for reasons no historian has ever been able to explain.”

Some sources suggest it was due to ill will against Thacher after a lengthy legal battle between herself and a man named Mr. Gifford, while others suggest it was due to Thacher’s connection to her cousin, Elizabeth Blackleach, who was accused of witchcraft herself in 1662. Whatever the reason, the charges against Thacher were ultimately ignored and no arrest warrant was ever issued.

Corwin remained on the bench of the court of Oyer and Terminer until October of 1692 when the court was officially disbanded and a new court was set up to hear the remaining witch trial cases. Neither Corwin or Hathorne were appointed to the new court.

After the Salem Witch Trials:

It is hard to assess Corwin’s attitude toward the trials since he let Hathorne do most of the talking during the pre-trial examinations and he never made any public statements about the trials during or after them. Unlike his fellow judge, Samuel Sewall, Corwin never apologized for his role in the witch trials.

Corwin later served as the judge of the Inferior Court of Common Pleas of Essex from 1692 to 1708, when he was transferred to the Superior Court. He was also appointed the commissioner of Excise and Impost on June 24, 1692 and from 1698 to 1702 he served as the judge of Probate. On November 23, 1703, Corwin, alongside John Hathorne, was appointed to a murder trial in Salem of a Native-American named Mamoosin.

According to the book Storm of Witchcraft, Corwin and Hathorne are forever linked because of the work they did together during the witch trials and also because the men were a lot alike:

“Jonathan Corwin’s name will always be linked with John Hathorne’s, as they were the local justices of the peace who conducted the initial examinations of suspected witches, though the men had many other things in common. Hathorne was but a year younger, and, like Corwin, was the son of a militia officer and magistrate who was a leading merchant and politician in Salem and Massachusetts Bay. Indeed, Jonathan’s [sic] father, William Hathorne had been the first man to serve as speaker of the House of Deputies in the General Court. John was first elected deputy in 1683, a year before Corwin, and became an assistant the next year. Hathorne opposed the Dominion of New England, but interim president Joseph Dudley was a close friend, so Hathorne did choose to serve as an Essex County magistrate under both Dudley and Andros. Like Corwin, Hathorne was on the Council for Safety, and afterward served as assistant under the interim government as well as councilor in the 1691 charter. In 1690, the general court ordered Corwin and Hathorne to travel north to New Hampshire and Maine to help coordinate the defense of those settlements against Native American attack. Presumably the two were chosen in part for the task because their families jointly owned and operated a sawmill at Kennebunk, on the Maine frontier. John’s late brother Eleazor Hathorne had been married to Corwin’s sister, and he had managed the mill until his death in 1679.”

Jonathan Corwin died June 9, 1718, just a year after John Hathorne died, and was buried in the Corwin family tomb at the Broad Street Cemetery in Salem. 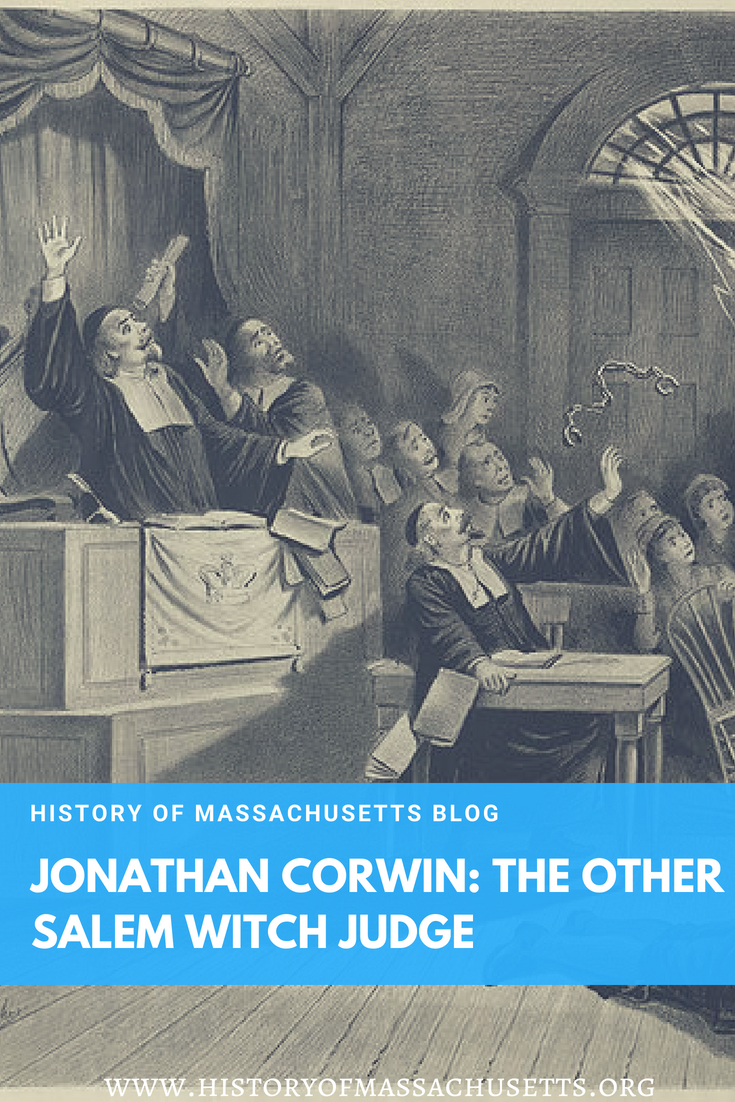