Maudslay state park is a large sprawling property in the small seaport town of Newburyport, Massachusetts.

The 450-acre park was once home to a wealthy investment banker Frederick Strong Moseley and his family. The Moseleys were an old English family that first came to America in the early 1600s.

The family first purchased the land in the 1860s and continued to buy surrounding property until they had created a large estate that they named Maudsleigh after their ancestral home in England.

The park is listed as a haunted location on several paranormal web sites and publications. Although no apparitions have even been seen there, rumors and stories continue to surround the mysterious property.

The property had once housed two mansions, a castle, many greenhouses, an expansive garden, stables, dairy barns and many other buildings.

These buildings had long been demolished, destroyed or fallen into ruin by the time the state purchased the land for five million dollars in 1985 and renamed it Maudslay.

All that remained where foundations to the old mansions, an old wrought iron gate, a pet cemetery, an old Italian garden, the dairy farm, several stone bridges and many dilapidated barns and servant houses.

In addition to these old structures, the park also features several Native American ceremonial mounds in the pine forest along Pine Hill Road. The mounds were once all connected to each other but several roads were built through them and partially destroyed them.

Not surprisingly, after the Moseley property was purchased in 1985, rumors and stories started to swirl that it was haunted.

Up until then it had been a private and exclusive place that many members of the public had never seen before and did not know much about.

The stories continued until they became local urban legends that still exist to this day. 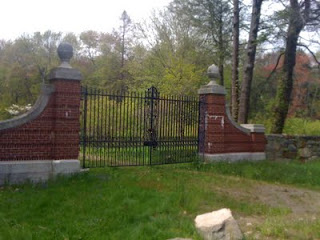 One famous landmark of the park that has garnered the most attention is the original wrought iron gate at the head of the driveway leading up to where one of the old family mansions used to be.

Legend has it that the old wrought iron gates are actually the “Gates of Hell” and if one were to drive by them late at night the decapitated heads of a murdered family could be seen on the spikes. Truth is, no such murder ever happened on the property and the story is completely fabricated.

The only untimely death that can be linked to the family is the accidental death on June 15, 1911 of Joshua Hale. Hale was a fellow Newburyport Public Library trustee of Frederick Moseley’s father, Edward.

Hale was struck and killed instantly by a car owned by Frederick at the Newburyport train station. Frederick’s chauffeur had just dropped him and his wife off at the station when he was backing up from the station and accidentally hit and killed Hale. 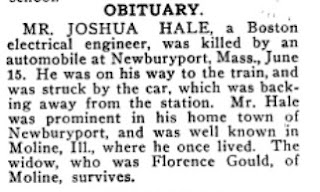 The Moseley’s were in fact kind, generous and caring citizens. Edward Moseley, Frederick’s father, was the president of the Massachusetts Society for the Prevention of Cruelty to Animals and the Humane Society and he donated large amounts of money to the Newburyport Public library.

Some of the Moseley family members, Frederick Strong Moseley, his wife Helen and their daughter Helen are actually buried in the nearby Oak Hill Cemetery.

Since no haunted property could be complete with just one set of “Gates of Hell,” another strange landmark on the estate has also earned the sinister nickname. In the middle of the park near the site of the old greenhouses sits a set of large metal doors that have been built into the hillside.

Due to the doors being bolted shut (although they have since been opened) they attracted a lot of attention and were also labeled the gates of hell. The truth behind this legend is that these doors lead to the Moseley family’s old root cellar that was once used to preserve the vegetables the family grew in their expansive gardens. 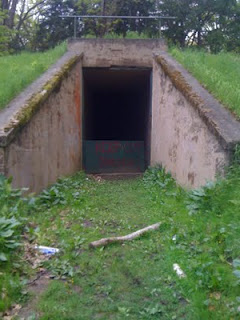 The property also once housed two beautiful mansions that were built in the early 1900s. The first house built on the property was the family’s main house, a large 72-room mansion that sat on the bank of the Merrimack river.

Frederick, his wife and their four children spent each spring and fall in this house until most of the children grew up and moved away. One of the couple’s daughters, Helen Moseley, remained unmarried and continued to live on the property throughout her adulthood.

The Moseley’s built Helen her own colonial mansion on the property sometime between 1939 and 1941. After Frederick and his wife passed away, Helen had the main mansion torn down. 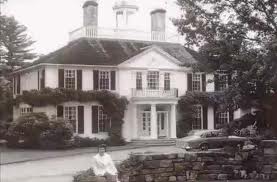 In an article in the Newburyport Daily News, a former resident of the property, John Dunford, who lived there as a child in the 1950s when his father worked as a gardener for the Moseley’s, described the main mansion and Helen Moseley:

“And let’s not forget the Big House overlooking the Merrimack. I remember it well. Nobody lived there anymore, but what a beautiful structure. Riding on my bike along the laneway and up and around the circular entrance area in front of the house. It was tragic to see the wrecking ball taken to it and in the end it was leveled to the ground. Story had it that Miss Moseley was paying property taxes on the place and couldn’t justify this ongoing expense. Did you know that Miss Moseley was a crack shot? I remember Dad telling the story about how she took a dislike to small animals outside her house nibbling on the bird food which she put out. So she would roll up her bedroom window, grab her rifle and take a shot at them! Well, that’s how the story went. Of course, Miss Moseley lived in that big white house which also overlooked the river. I found out that it burned down many years ago. Tragic.” 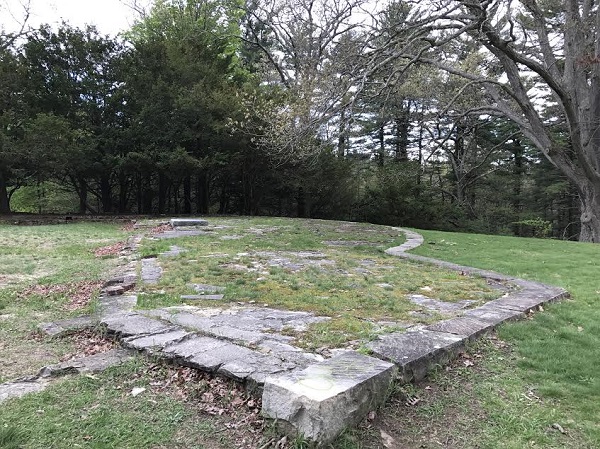 The estate has suffered from a number of fires that have destroyed many buildings on the property such as Helen Moseley’s house in 1978, the coachman’s barn that burned down in 2010 and another storage building that burned down a few years before.

Some of the fires were deemed arson and were suspected to have been lit by teenagers trespassing on the property at night.

Brush fires have also plagued the property. A fire in 1911 wiped out the Moseley’s pine tree grove and the trees were replaced with 20,000 seedlings that the family had shipped in on the river. Another brush fire struck the park in April of 2011 and burned many acres of trees.

Moulton castle was yet another structure that once existed on the property. The building was a large gothic wooden castle built in the late 1800s by a Civil War captain named Henry Moulton.

The Moseley family bought the property in 1900 in order to get the land the castle sat on and quickly razed the castle after buying it. That area of the park is now known as Castle Hill. 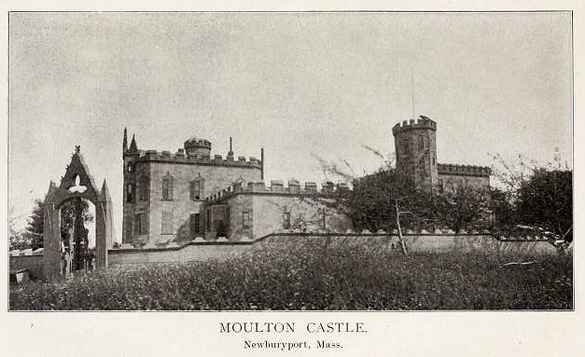 Another eerie feature of the property is a pet cemetery found near the site of the old mansions. The Moseleys were animal lovers and the cemetery is actually the resting spot of the family’s beloved Jack Russell terriers.

Each headstone is marked with the pet’s names. Some of the headstones are also said to mark the graves of the family’s favorite pet horses that lived at the barn on the property.

If the Maudslay State Park association is trying to squash any of the haunting rumors they are not trying too hard.

The association holds an annual “Maudslay Park is Haunted” event every Halloween where kids can listen to scary (fictional) stories while walking around the trails.

Local theater groups also perform Shakespearean plays, such as the Tempest, in the park and use the old gates and buildings as stages and backdrops.

It is not known how the haunting rumors started but locals speculate a former caretaker of the estate started them in the 1960s and 70s to keep kids and curious visitors from trespassing on the property and breaking into the old buildings.

Whether the old Moseley estate is haunted or not it is still a beautiful estate and a historic Newburyport landmark. 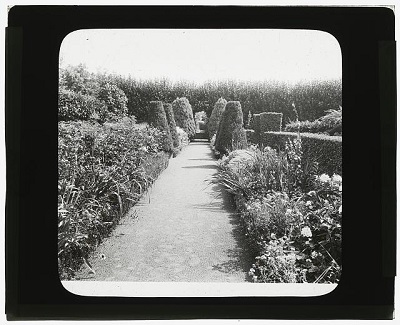 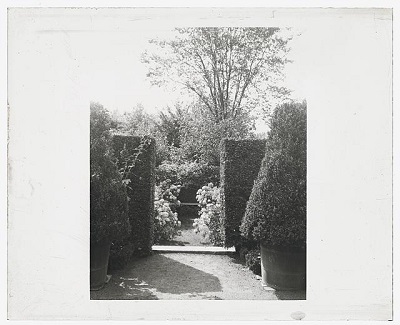 5 thoughts on “History of Maudslay State Park in Newburyport”