Despite the fact that he was the son of a French immigrant, Paul Revere volunteered to fight against the French in the French and Indian War in 1756.

Revere spent his short time in the war on the Crown Point expedition at Fort William Henry on Lake George in New York,

The Province of Massachusetts Bay, where Revere lived, joined the war in the spring of 1755 when the Massachusetts General Court authorized the raising of 3,500 men for the war. On March 29, 1755, Massachusetts Governor William Shirley issued the following order:

“Province of the Massachusetts Bay
By his Excellency the Governor, I do hereby authorize and empower Ephraim Wesson to beat his drums anywhere within this Province, for enlisting volunteers for his Majesty’s service, in a regiment of foot to be forthwith raised for an expedition to Crown Point, and the lake of the Iroquois Indians, of which Regiment Moses Titcome is colonel. And the colonels, with the other Officers of the Regiments within this Province are hereby commanded not to give the said Ephraim Wesson any obstruction, or molestation herein; but on the contrary to afford him all the necessary encouragement and assistance, for which this is a sufficient warrant. Given under my hand at Boston the 29th day of March, 1755, in the 28th year of his Majesty’s rein. William Shirley.” 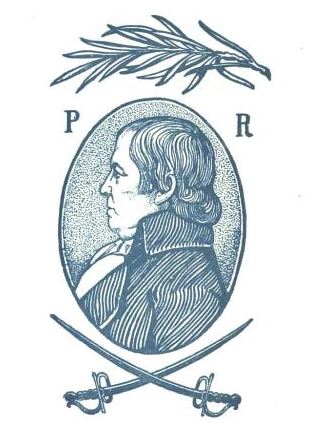 It’s not clear exactly why the 21-year-old Paul Revere decided to join the war. He never stated his reasons for doing so but it was most likely either for the steady paycheck or because many men in Massachusetts at the time felt compelled to protect the area from the constant threat of attack from the French.

“To Paul Revere Gentleman – Greeting
By virtue of the power and authority and by his Majesty’s Royal Commission to me granted to be Captain General & ca: over this his Majesty’s Province of Massachusetts Bay aforesaid I do by these presents reposing especial trust and confidence in your loyalty, courage, and good conduct, constitute and appoint you the said Paul Revere to be second lieutenant of the train of artillery, to be employed in the intended expedition against Crown Point under the command of Richard Gridley Esquire, in the forces raised or to be raised within this and the neighbouring governments whereof the Honourable John Winslow Esquire is General and Commander in Chief. You are therefore carefully and diligently to discharge the duty of second lieutenant in the said train in ordering and exercising the great artillery & c: both inferiour officers and Montrosses, and to keep them in good order and discipline: hereby commanding them to obey you as their second lieutenant, and yourself to observe and follow such orders and instructions as you shall from time to time receive from the Commander in Chief, or other your superiour for his majesty’s service, according to the rules and discipline of war pursuant to the trust disposed in you. Given under my hand and seal at arms at Boston, the eighteenth day of February in the twenty ninth year of the reign of his Majesty King George the second, Annoque Domini 1756. By his excellency’s command, Tho Clarke, Dp Secry.”

Revere was paid £5 a month for his service. Although this wasn’t a great amount of money, it was enough to pay his bills back home and have enough left over for his mother and siblings, whom he had become financially responsible for ever since his father passed away a few years before.

After joining the war, Revere and his regiment marched to Albany, New York in May of 1756. From there they followed the Hudson River into French Canada territory. They rowed upriver until they came to the rapids at a place called Half-Moon.

There they disembarked and continued on foot until they found a spot where the water was calmer and they continued up the river. They continued to encounter rapids along the river many times and had to repeatedly disembark and carry their supplies on foot.

The men disembarked for the last time at Fort Edward and marched more than a dozen miles to Fort William Henry, which was a walled fort just south of Crown Point at Lake George in New York. According to the book The Revolutionary Paul Revere, the conditions at the fort were not what the men expected:

“Paul and the others walked into a mess. Latrines, tents, slaughterhouses, kitchens were all jammed together. One observer said the ‘camp is nastier than anything I could conceive.’ Not surprisingly, several hundred of the two thousand men on site were sick.” 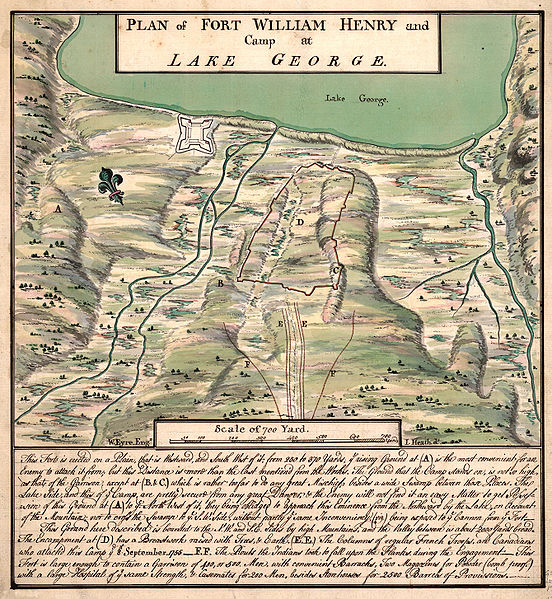 Plan of Fort William Henry on Lake George circa 1760. The text at the bottom of the map reads: This fort is erected on a plain, that is Westward, and South West of it; from 250 to 370 yards; ye rising ground at (A) is the most convenient for an enemy to attack it from; but this distance is more than the last mentioned from the works. The ground that the camp stands on is not so high as that of the garrison except at (B & C) which is rather too far to do any great mischief; besides a wide swamp between those places. The lake side, and this of ye camp are pretty secured from any great danger, & the enemy will not find if an easy matter to get possession of this ground at (A) to ye north west of it, they being obliged to approach this eminence from the Northward by the Lake, on account of the mountain; not to cross the swamp to ye S.W. Side, without partly ye same inconveniecy. (viz.) being exposed to ye cannon from ye fort. This ground here described is bounded to the N.W. and S.E. Sides by high mountains, and the valley between is about 2000 yards broad. The encampment a (D) has a Breastwork raised with trees & Earth. (E.E.) The columns or regular French Troops, and Canadians who attack’d this camp ye 8th September, 1755, The routes the Indians took to fall upon the flanks during the engagement. _This fort is large enough to contain a garrison of 400, or 500 men, with convenient barracks, two magazines for powder (bomb proof) with a large hospital of ye same strength & casements for 200 men, besides storehouses for 2500 barrels of provisions.

Gridley’s regiment badly need boats to carry them across the lake so the fort commander, Colonel Jonathan Bagley, set the men to work building as many boats as they could. While they labored, the regiment was constantly harassed by French and Indian raiding parties. Almost every day, Indians would sneak up and pick off a few troops. Bagley sent out scouting parties to seek them out and catch them, he reported:

“I constantly keep sending out small scouting parties to the eastward of the lake, and make no discovery – but the tracks of small parties who are plaguing us constantly; but what vexes me most, we can’t catch the sons of bitches. I have sent out skulking parties some distance from the sentries in the night, to lie still in the bushes to intercept them; but the flies are so plenty – our people can’t bear them.”

As the second lieutenant, Revere likely led or at least served on these expeditions. The scouting parties were of no help though and they failed to catch any of the raiders.

Before the men knew it, it was fall and the troops realized they weren’t going to make it to Crown Point before winter. The war came to a halt for the winter and Revere and his regiment began the long march home. The book Paul Revere: A True Republican, sums up Revere’s short time in the French and Indian War in the following way:

“While Lord Loudon and the Provincial officers waged their endless disputes over rank and subordination to authority, the French took Fort Oswego from the British, the Crown Point expedition never got underway, and the French built Fort Carillon (Ticonderoga) on Lake Champlain, an act that would impede the British advance into Canada for three years. Paul Revere had no choice to test his courage and patriotism or to display his skill in the elite military science of artillery. He returned to Boston in November 1756 with neither laurels on his brow now war stories that would entertain future grandchildren…”