The New England Confederation was a military alliance between the New England colonies of Plymouth, Connecticut, New Haven and Massachusetts Bay in the 17th century.

The alliance was formed in 1643 to provide joint military support against attacks by Native-Americans, the French and the Dutch.

What Inspired the New England Confederation?

The confederation was formed as a direct result of the Pequot War which was a war fought between the Pequot tribe and an alliance between the New England colonists and their Native-American allies the Mohegan and the Narragansetts.

The experience of working together to defeat their common enemies inspired the idea to create an official alliance, according to the book Conceived in Liberty:

“The experience of the Puritan colonies in the joint aggression against the Pequots, added to the continuing drive of Massachusetts Bay for domination over its neighbors, led to a more formal bond between them.”

The first time a confederation between the colonies was officially discussed was during the synod in August of 1637 for the condemnation of Anne Hutchinson.

It was attended by ministers from Connecticut and Massachusetts, including John Winthrop, who suggested the synod become an annual meeting of the ministers due to their mutual “distaste for unauthorized interpretation.” 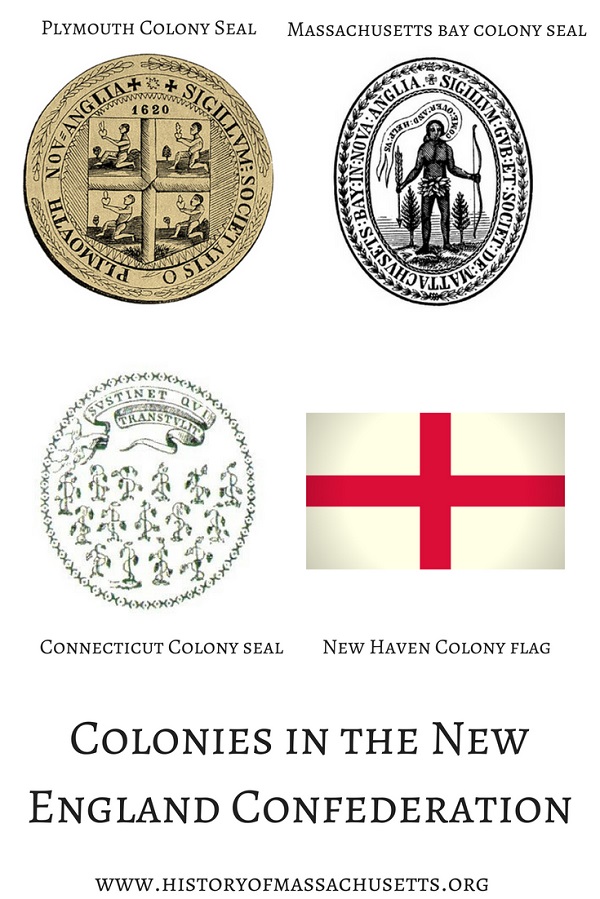 In spring of 1638, several Connecticut ministers suggested a confederation but neither side could see eye to eye on the matter.

Connecticut brought up the issue again in 1639, as a result of threats from the New Netherland colony, but nothing came of it.

In 1640, threat of an Indian war prompted Rhode Island, Connecticut and New Haven to offer a joint proposal on the matter but the Massachusetts Bay Colony refused to work with Rhode Island, whom it viewed as too tolerant of other religions.

Finally, in the fall of 1642, Plymouth Colony proposed a confederation in which the General Courts in each colony would ratify all agreements.

The colonies all decided to send delegates to a meeting in the spring to finalize the details. 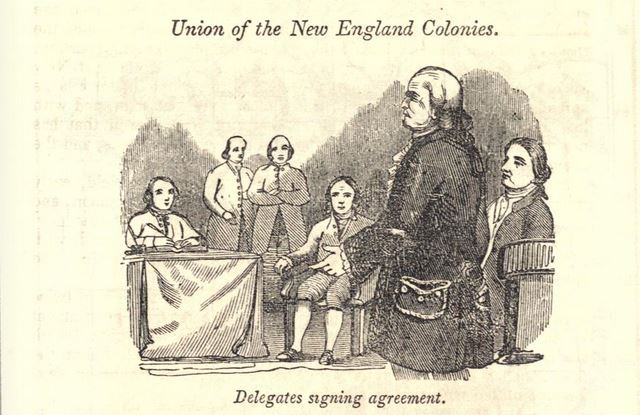 The meeting took place in Boston in May, 1643. Representatives at the meeting included: John Winthrop and John Dudley from the Massachusetts Bay Colony, John Haynes, Edward Hopkins and George Fenwick from the Connecticut colony, William Collier and Edward Winslow from the Plymouth colony and Theophilus Easton and Thomas Gregson from the New Haven colony.

The New England Articles of Confederation:

After discussing the details of the confederation, the representatives created a 12-part document, called the Articles of Confederation of the United Colonies of New England, and signed it on May 19, 1643.

According to the terms of the confederation, each colony was given equal power and each colony’s responsibilities in the alliance were laid out.

The colonies were also required to provide two representatives each for an annual meeting. The locations of each meeting were to rotate each year among the colonies. Each decision made at the meetings required six votes to pass.

The individual colonies could call on the other colonies for help in an emergency but an overall vote was required. The number of armed men each colony sent in an emergency was based on the population size of the colony.

As far as policing was concerned, the individual colonies were encouraged to avoid war as much as possible and to keep peace within its own colony in order to prevent enemies from taking advantage of internal problems.

In addition, runaway servants and slaves escaping to other colonies within the confederation were to be returned to their masters. Escaped prisoners were also to be returned.

Rhode Island was not invited because it was considered too religiously radical. Settled by Roger Williams, a religious outcast from Salem in the Massachusetts Bay Colony, Rhode Island had quickly become a refuge for religious outcasts and had a large number of Quakers, Anglicans and Roman Catholics, which the other colonies did not approve of.

The first few decades after the confederation was formed went by peacefully, with few problems or conflicts. The confederation’s biggest problem at the time was trying to figure out how to get Rhode Island to merge with another colony so they could get access to Rhode Island’s land and tone down the colony’s policies of religious tolerance, according to the book Encyclopedia of U.S. Political History:

To prevent the Massachusetts Bay Colony from seizing its land, Roger Williams traveled to Parliament in London to personally apply for a charter for Rhode Island in order to make the colony official and protect its land. Williams was successful and on March 14, 1644, Parliament’s Committee on Foreign Plantations granted Rhode Island its charter.

England and the Dutch Republic began fighting for control of the land belonging to the New Netherland colony, which is now New York City, in the 1640s.

Both sides claimed the land was theirs and wanted complete control of it so they could have access to the Hudson river to conduct fur trade expeditions in the north, according to the book Colonial New York:

“Anglo-Dutch conflict over their respective territorial claims in the New World complicated matters still more. Based upon Henry Hudson’s explorations, the Dutch claimed all land between the fortieth and fifty-fourth degrees of north latitude (subsequently extended southward), although the States-General had not actually designated any boundaries when it created New Netherland in the 1620s. England, meanwhile, insisted that it had historic title to the territory between thirty-four and forty-eight degrees. Though Plymouth’s governor, William Bradford, was himself willing to ignore the obvious overlap, he warned the Dutch that if the home governments did not settle the controversy, it would be ‘harder and with more difficulty obtained hereafter, and perhaps not without blows.'”

In 1650, the confederation signed a treaty, known as the Treaty of Hartford, with the New Netherland colony that established clear boundaries between English and Dutch lands. The New England Confederation never submitted the treaty for ratification in England though, deciding instead to make treaties on its own in an attempt to self-govern.

In 1652, the First Anglo-Dutch war broke out, which was a naval war between the English and the Dutch over trade routes and colonies. Connecticut and New Haven considered the First Anglo-Dutch war a threat to their safety and asked for assistance from the confederation. Massachusetts and Plymouth considered the war to be an unnecessary conflict and refused assistance.

Charles II later seized the New Netherland colony in 1664, took over the fur trade in the colony and gave the colony to his younger brother James, the Duke of York, who renamed it New York.

In 1675, King Philip’s War broke out which resulted in an immediate need for military support throughout southern New England.

The war was fought between Wampanoag Indians and the English colonists in New England, according to the book International Encyclopedia of Military History:

“The war for dominance of New England was the product of a half-century of tensions. After the Pilgrims established Plymouth in 1620, the Wampanoags signed several treaties ceding territory to the settlers. In 1662, the new Wampanoag leader, Metacomet (called Philip by the English) realized the Indians had gone so far in accommodating the English that the survival of Indian culture and traditions was in danger….The Wampanoags gained support from the Nipmunks, Narragansetts,and smaller tribes. The combined Indian forces led attacks on six white settlements…”

The confederation voted in favor of providing military assistance for the war and officially declared war on the Native-Americans on September 9, 1675. By December of 1675, the Confederation raised an army of over 1,000 armed men.

The war lasted fourteen months, officially coming to an end in August of 1676, and is considered one of the bloodiest colonial Indian wars. Between 600 to 800 colonists and 3,000 Indians were killed.

Half of the English towns in New England were damaged and about 12 were destroyed. Most of the surviving Indians were either sold into slavery or forced to leave New England.

The End of the New England Confederation:

Although the colonists won King Philip’s War, the conflict brought some of the Confederation’s problems to the surface. Connecticut had resented having to send soldiers to the Massachusetts Bay Colony and Plymouth, particularly because those colonies had refused to assist Connecticut and New Haven after the outbreak of the First Anglo-Dutch war.

The Massachusetts Bay colonists also felt it was unfair that they had to provide more soldiers than any of the other colonies. In addition, Rhode Island provided the confederation with a lot of military support and wanted to be admitted to the confederation as an equal partner. The other colonies refused because they disapproved of Rhode Island’s tolerance of Quakers, Catholics, and Anglicans.

This tension led to a lot of political instability in New England in the 1670s and early 1680s. When Charles II tried to tighten his control over the squabbling colonies, the Massachusetts Bay Colony defiantly resisted, which resulted in the colony have its charter revoked in 1684.

In 1686, James II then merged the New England colonies into one mega colony, known as the Dominion of New England, which officially brought the confederation to an end.

Although confederation was over, the experience had a long-lasting effect on the colonists, according to the book Encyclopedia of U.S. Political History:

The experience of working together in the confederation may have later inspired the colonies to join together yet again in defeating another enemy, the British government, during the American Revolution. 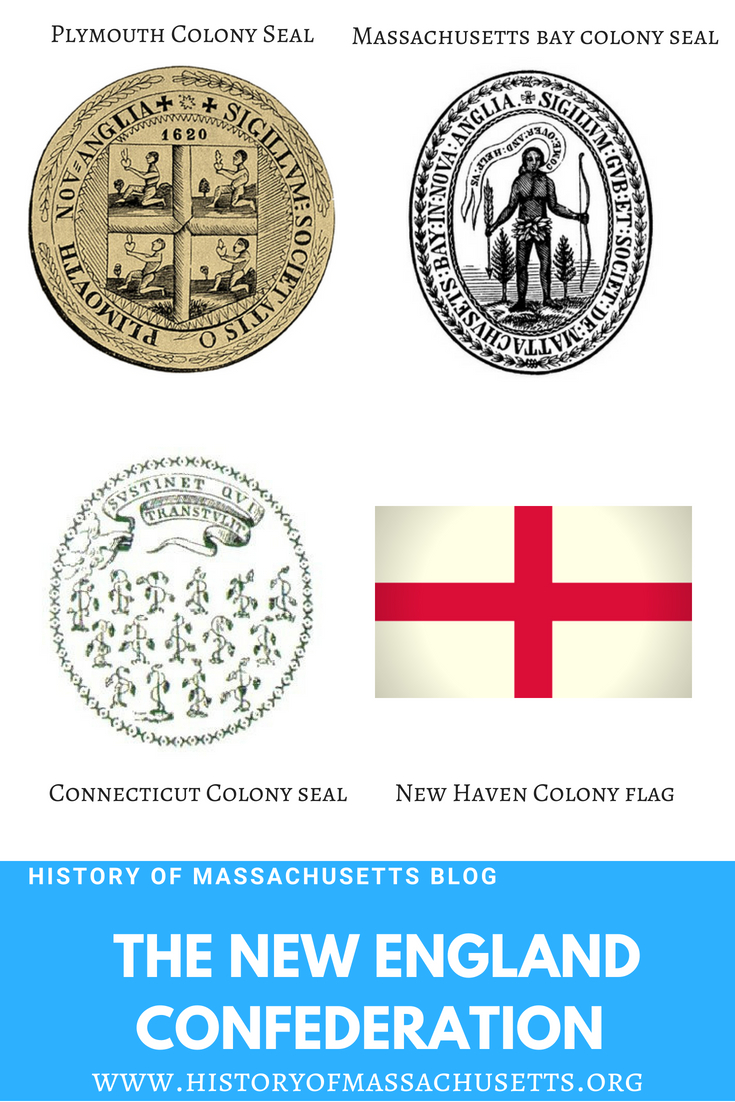 3 thoughts on “What Was the New England Confederation?”