In January of 2016, the Gallows Hill Project confirmed that Proctor’s Ledge, not Gallows Hill, is the site of the Salem Witch Trials hangings that occurred in 1692. The ledge is a small hill located between Proctor Street and Pope Street in Salem, Mass.

Prior to this announcement, many believed that nearby Gallows Hill, at the intersection of Manswell Parkway and Witch Hill Road, was the site of the 1692 executions.

The reason for this is because in 1867, historian Charles Wentworth Upham determined in his book Salem Witchcraft that Gallows Hill was the probable location of the executions but admitted that there is no actual evidence to support this conclusion.

There are a number of reasons why Gallows hill is not the original site of the executions. The first reason is Gallows Hill is much too steep for the cart carrying the accused witches to climb.

The second reason is that, according to one local legend, Benjamin Nurse, son of accused witch Rebecca Nurse, supposedly rowed a boat under the cover of night from a creek near the Nurse homestead into the North River and right up to base of the hill where the execution took place in order to gather his mother’s body and give her a proper Christian burial on her property.

Since there are currently no waterways, and never have been, leading directly to Gallows hill or anywhere near it, this makes it an unlikely location for the execution site. 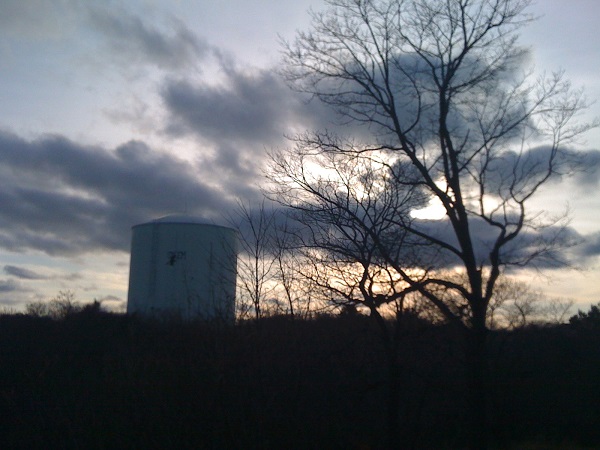 The reason why the Gallows Hill Project team believe Proctor’s Ledge is the execution site is because of a number of letters and diaries discovered by historians over the years. One such letter, published in Upham’s book, was written by Dr. Holoyoke in 1791, and reads:

“In the last month, there died a man in this town by the name of John Symonds, aged a hundred years lacking about six months, having been born in the famous ’92. He has told me that his nurse had often told him, that while she was attending his mother at the time she lay in with him, she saw, from the chamber windows, those unhappy people hanging on Gallows Hill, who were executed for witches by the delusion of the times.”

Historian Sidney Perley wrote an article, published in the Historical Collections of the Essex Institute periodical in January of 1921, where he stated that he located the home where Symonds was born on North street and found that Gallows hill is not even visible from the home because it is blocked by Ledge hill. 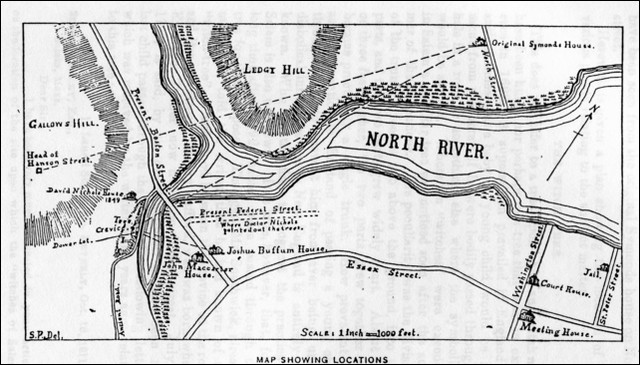 What he found was visible from the home was a smaller hill, now named Proctor’s Ledge, close to Gallows hill, near Proctor street. As this hill was lower and less steep, it would be much easier for the cart carrying the accused witches to climb.

Proctor’s Ledge also has a rocky crevice running along the side of it and, according to the statement of Boston merchant Robert Calef, who visited Salem in 1692 and published a book in 1700 about what he witnessed there, titled More Wonders of the Invisible World, the bodies of some of the accused witches were placed in a rocky crevice after their execution:

“When he [George Burroughs] was cut down, he was dragged by the halter to a hole, or grave, between the rocks, about two feet deep, his shirt and breeches being pulled off, and an old pair of trousers of one executed put on his lower parts; he was so put in, together with Willard and Carrier, that one of his hands and his chin, and a foot of one of them, were left uncovered.” 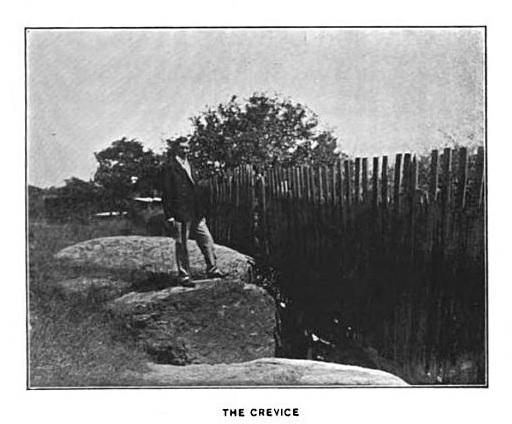 According to Perley, an old family story from the Buffum family states that Buffam could see, from his house on nearby Boston street, Burrough’s exposed hand and foot sticking out of the crevice, so just after night fall he went to cover them so they were no longer visible.

Perley also interviewed a man named Edward F. Southwick who, as a boy, used to live with the great-great granddaughter of John Proctor, Mrs. Nichols. According to Southwick, Mrs. Nichols told him that the accused witches were executed near this rocky crevice. 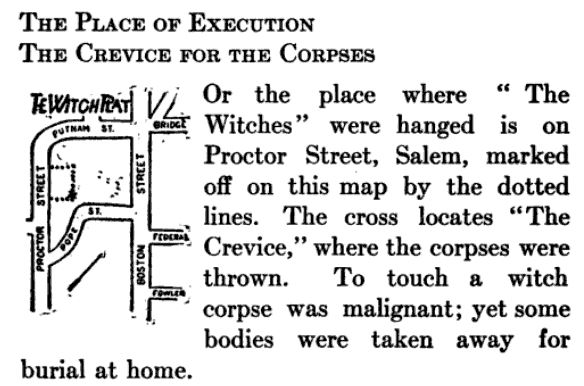 The Place of Execution, illustration published in A Short History of the Salem Village Witchcraft Trials, circa 1911

Another clue about the location of the execution site comes from the diary of John Adams. According to an entry in his diary in 1766, Adams mentioned visiting the site of the executions at a place he called “Witchcraft Hill”:

“Returned and dined at Cranch’s; after dinner walked to Witchcraft hill, a hill about half a mile from Cranch’s, where the famous persons formerly executed for witches were buried. Somebody within a few years has planted a number of locust trees over the graves, as a memorial of that memorable victory over the ‘prince of the power of the air.’ This hill is in a large common belonging to the proprietors of Salem, & c. From it you have a fair view of of the town, of the river, the north and south fields, of Marblehead, of Judge Lynde’s pleasure-house, & c. of Salem Village, &c.”

When Perley discovered the small hill in 1921, he asked the owner of the hill at the time, Solomon Stevens, if locust trees had ever grown on the hill. Steven’s family confirmed that there were once locust trees on the hill but they had been cut down years before:

“Through the infirmities and weakness of years, he [Solomon Stevens] was unable to talk intelligently, but his son and daughter said that there had been two large trees standing there, until about 1860, when the son felled them, and dug out the stumps, as the trees were in their garden. He pointed out the place where each had stood, – on the near side of the fence running along the brow of the ridge or hill at the left of the picture, – one where a little dot appears, and the other in the shrubbery about thirty or forty feet to the left of the first, at the very edge of the picture. The last-named tree (the one farthest to the left) stood in a crevice between the ledges..The writer has found neither evidence nor tradition that locust trees ever grew upon the top of Gallows hill; nor that a crevice ever existed there where the bodies of Burroughs, Willard and Carrier could have been partially buried.” 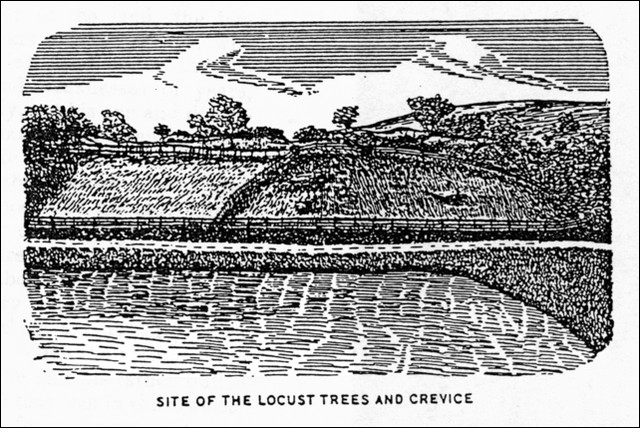 Site of The Locust Trees and Crevice, illustration published by Sidney Perley, circa 1921

All of these factors point to Proctor’s Ledge as the execution site. Despite locating the execution site, the Gallows Hill Project team found no evidence that the victims were buried at the ledge and the location of their graves remain unknown. 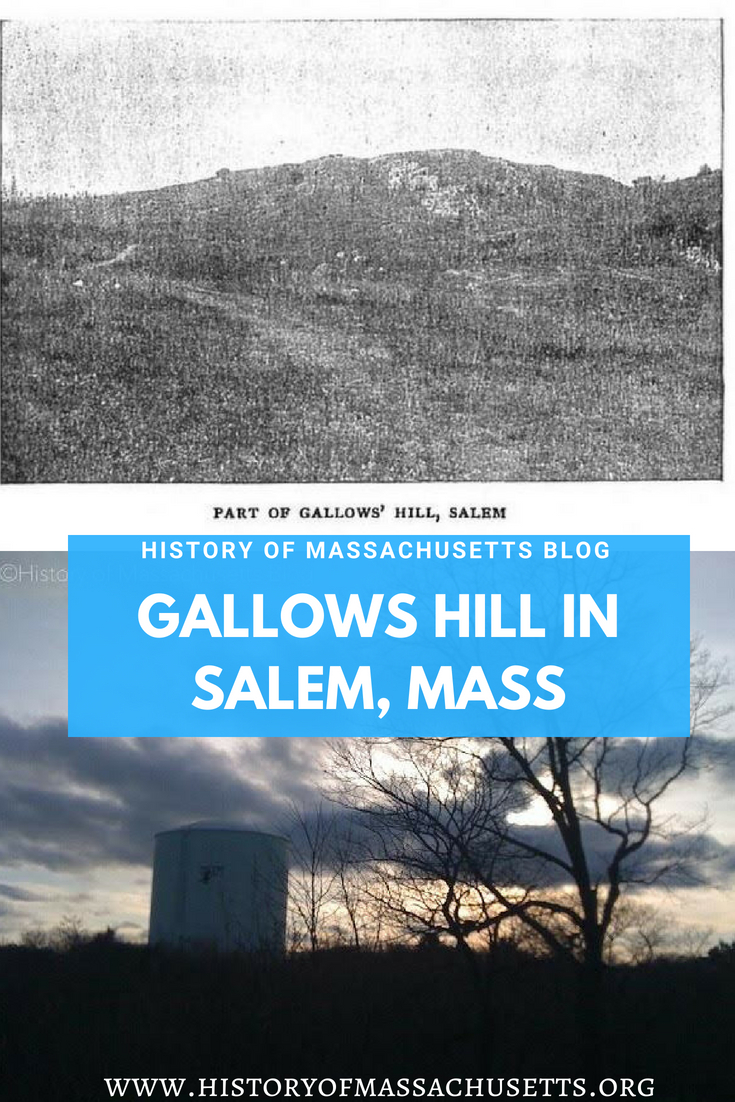