A British Redcoat costume makes for a great costume for a Halloween party, reenactment or class presentation.

The costume is so distinct and iconic of the American Revolution that it is easily recognizable as a Revolutionary War soldier costume.

Britain first adopted its iconic Redcoat uniform in 1660 and they continued to wear them well into the 19th century. The redcoats were designed to make the soldiers more visible on the smoky battlefield so generals could identify and organize their soldiers more efficiently.

The downside of these bright red coats is it also made them more visible to the enemy as well. The bright redcoat earned the soldiers many nicknames during the American Revolution including “lobsters” and “bloody backs.”

A redcoat uniform with buff facings, worn by a British soldier in the American Revolution, on display at the Smithsonian National Museum of American History, photographed by Matthew Bisanz in 2009

The redcoats were also decorated with lace, piping and buttons. Two white belts made an x across the soldiers chest. One belt held a bayonet and the other a cartridge box.

There seems to be far fewer British redcoat costumes available for sale than all the other types of Revolutionary War costumes. I guess this is not that surprising seeing they were technically the bad guys in the American Revolution but it does make your options a bit limited.

I only found two costumes for kids that closely fit the description of the British Redcoat uniform.

The first costume is this Redcoat child costume by California Costumes on Amazon.


The costume is made out of polyester and comes with a long red jacket with buttons and black facings and an attached off-white vest. It also comes with a white belt that goes across the chest, black boot toppers and a cravat. The tricorne hat and wig are sold separately and the sword and shoes are not included.

The costume almost matches the uniforms worn by the 66th regiment perfectly except that the facings are black instead of dark green. Other than that the costume is spot on. The costume is not available in adult sizes.

The second costume is this British Redcoat child costume on HeritageCostumes.com.

The costume is made out of polyester and comes with a redcoat with buttons and navy blue facings, a vest and attached dickey, lace jabot, white breeches and lace cuffs.

This costume matches the uniform worn by the 1st Royal regiment exactly, right down to the blue facings and the decorative lace. The costume is made in the USA.

The only downside is that Heritage Costumes are overall the most authentic historical costumes but they come with a higher price tag as a result.

The costume matches the uniform worn by the 3rd Queen’s regiment, which had a redcoat with buff-colored facings, almost perfectly except it doesn’t come with a hat and doesn’t have a white belt across the chest.

Another authentic-looking Redcoat costume I found is this British Redcoat adult costume by International Costumes on Amazon.


The jacket is made out of polyester and the rest of the costume is a polyester and cotton blend. The costume comes with a redcoat with metal buttons and blue facings, a white vest and breeches, a white lace trimmed colonial jabot with matching cuffs. The tricorne hat, black boot spats, wig and sword are not included.

With its blue facings, this costume matches the uniform of the 1st Royal regiment perfectly.

To complete your British Redcoat costume you’ll need accessories such as this combination Colonial child wig and hat by Forum Novelties on Amazon. The wig and hat are made out of polyester and the hat is about 3 inches high and 14 inches wide. One size fits most children.

There is also a Colonial adult wig and hat by the Jacobson Hat Company on Amazon. The hat is about 15 inches wide and is made out of canvas with steel wires underneath to hold its shape. One size fits most adults. 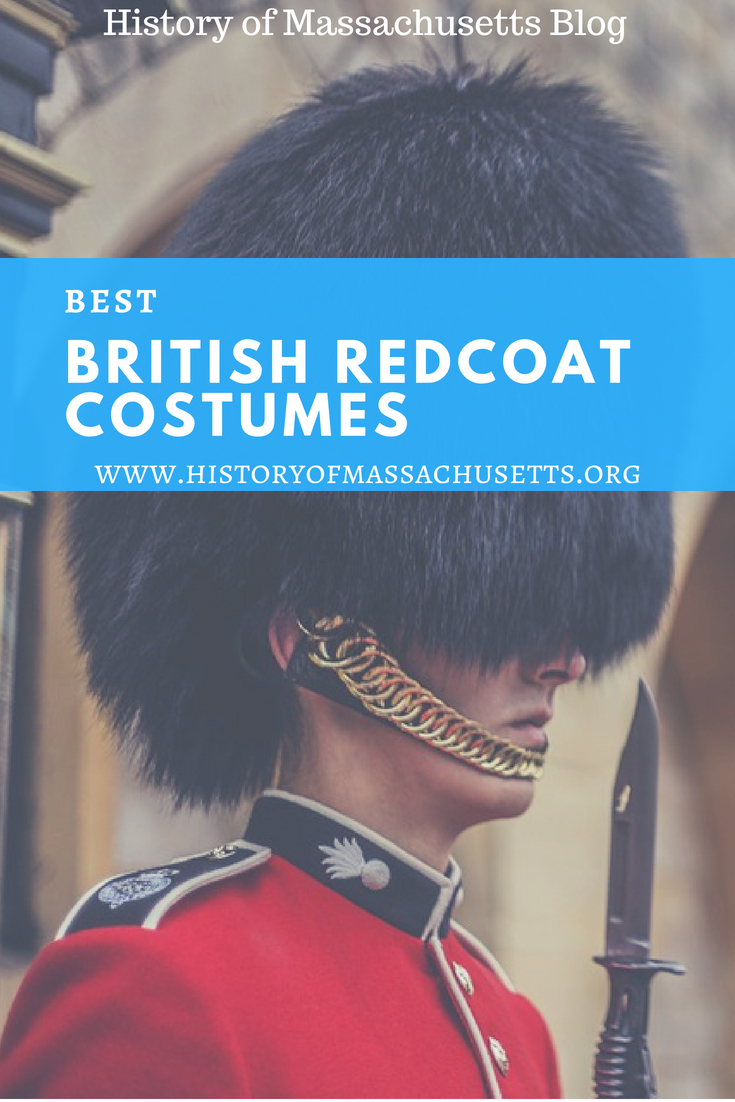