British soldiers in the Revolutionary War served in the British army, which fought for Great Britain.

These soldiers were considered some of the most skilled, experienced and professional soldiers around and were a very intimidating enemy.

The following are some facts about British soldiers in the Revolutionary War:

How Many British Soldiers Fought in the Revolutionary War?

A total of 50,000 British soldiers fought in the war. According to an article titled American Revolution – FAQs on the Civil War Trust website, about half of these soldiers were troops brought over from Britain while the other half were loyalists:

“At its peak, the British Army had upwards of 22,000 men at its disposal in North America to combat the rebellion. An additional 25,000 Loyalists, faithful to Great Britain, participated in the conflict as well.”

Author Don N. Hagist stated in an interview with Liz Covert for the Ben Franklin’s World Podcast that about 2,000 soldiers in the British army were Europeans recruited in Continental Europe. These soldiers were mostly German but many were also Swedish, French, etc.

How Old Were Most British Soldiers in the Revolutionary War?

The majority of the British soldiers who enlisted during the Revolutionary War were between 20 and 25 years old and joined the military only after having first tried their hand at a different career. 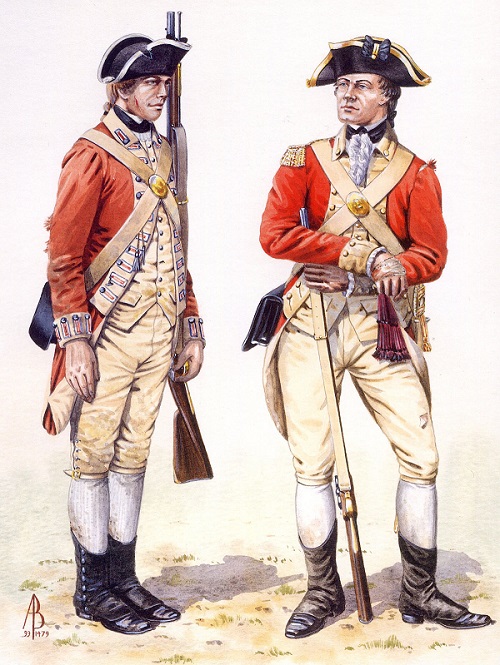 Recruiting instructions called for men between 17 and 25 years old, but occasionally boys as young as 12 years old and also middle-aged men joined too.

How Many British Soldiers Died in the Revolutionary War?

It is estimated that between 24,000 to 25,000 British soldiers died in the Revolutionary War. This number includes battlefield deaths, deaths from injuries and disease, men taken prisoner, and those who remained missing.

Where Were British Soldiers Buried During the Revolutionary War?

“At Mount Independence State Historic Site in Orwell, Vermont, researchers have found several burial sites that probably contain the remains of Americans, British, Germans, Canadians, and Native Americans killed in battle. According to local legend, Old Salem Burying Ground in the village of Salem, New York, may be the final resting place of about 100 American soldiers killed in the Battle of Saratoga. Another local tradition has hundreds of American soldiers buried in unmarked graves around Bethlehem, Pennsylvania, site of a Continental Army hospital. In 1892 the bodies of 10 soldiers who fell in the Revolution were removed to Arlington National Cemetery and buried in honored glory.”

During the Revolutionary War, British Army regulations called for battlefield burial of their dead. Most British soldiers were buried where they died and many still remain in these makeshift graves while others were reburied in cemeteries when their graves were rediscovered after the war ended.

In fact, two of the three British soldiers from the 4th Regiment Light Infantry Company that were killed at the Battle of Concord in 1775 are still buried at the foot of the Old North Bridge, and the third soldier was buried nearby at the center of town, although a house was reportedly built over his grave in the 19th century.

Near the Paul Revere Capture site in Lexington, Mass is a grave marker for an unknown number of British soldiers killed during the retreat back from the Battle of Concord to Boston. The marker reads: “Near Here Are Buried British Soldiers. April 19, 1775.”

Also, an entire neighborhood of residential backyards in Charlestown, Mass is believed to be the location a 15-foot-deep mass grave of British soldiers who died in the famous Battle of Bunker Hill in 1775. The area was once a section of the Bunker Hill battlefield and the soldiers were buried in a ditch dug by the American soldiers before they retreated at the end of the battle.

In 1986, construction workers in Philadelphia found a shallow unmarked grave of a British soldier in the Mount Airy section of Philadelphia and reburied him in a nearby cemetery with a military service. The unidentified soldier is believed to have died on the spot he was buried during the Battle of Germantown in 1777.

How Many British Soldiers Deserted During the War?

It is estimated that around 7 percent of British soldiers deserted and never returned. This number increases to 10 percent if you include POWs who never returned to the army after they were released from capture.

Around 5,000 British soldiers who deserted the army remained in the American colonies after the war. Some of these men deserted because of misconduct on their part or fear of harsh discipline by the British military but others deserted because they married women in America and didn’t want to leave their new families behind when it was time for the British army to return to England after the American Revolution ended.

Why Did British Soldiers Join the Military?

There is a common misconception that British soldiers represented the dregs of society, such as alcoholics, criminals and the homeless who were forced into the military due to their dire circumstances. This is simply not true, says author Don N. Hagist in an interview with Liz Covart on the Ben Franklin’s World Podcast:

“It’s an almost complete myth that the British soldiers were from the dregs of society. British society was quite a continuum from its own dregs to its upper classes. Great Britain during this time had a thriving middle class and we tend to forget that today and think it was a much more two-tiered society when really it was a continuum and British common soldiers came from almost every place on that spectrum of society and were mostly lower middle class to middle class citizens who gravitated toward the army for the very same kind of reasons that people gravitate toward joining the army today. It was a stable career, the pay, while not great, was reasonable, and at least the pay was guaranteed once you were a soldier, unlike the large amounts of itinerant and temporary labor that was available during the era. The occupation of a soldier in Great Britain was one of the very, very few professions that offered a pension if you served for a long career. So it had a lot of attractive aspects to it.”

In the interview, Hagist states that about 55% of the British soldiers had practiced a skilled trade before joining the army and the remaining 45% tended to be agricultural laborers.

According to Hagist in his book British Soldiers, American War, many British soldiers became career soldiers who served for the entire war and longer:

“A substantial portion of these experienced the entire eight years of hostilities as one aspect of careers that lasted twenty years and longer. Many enlisted after the war began and were eligible for discharge when it ended, but chose instead to remain in the army.”

What Did British Soldiers Wear in the Revolutionary War?

British soldiers wore uniforms that consisted of a long redcoat with colored facings indicating which regiment the soldier was in. 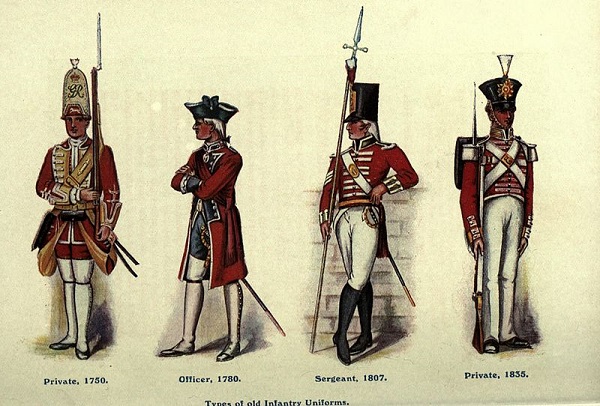 What Did British Soldiers Eat in the British Army?

Soldiers in the British Army received a daily ration of 1 ½ pounds of bread, 1 pound of beef or ½ pound of pork, ¼ pint of peas or 1 ounce of rice, 1 ounce of butter and 1 ½ gills of rum.

Nicknames for British Soldiers in the Revolutionary War:

Due to their long redcoats, British soldiers were nicknamed “lobsters” and “bloody backs” by the colonists. According to Stephen Brumwell in his book Redcoats: The British Soldier and War in the Americas, 1755-1763, the nicknames were not flattering and were intended to be insults:

“That both nicknames were deemed derogatory is indicated by their employment in Boston during the confrontation that triggered the ‘massacre’ of 5 March 1770; on that occasion townsfolk goaded redcoats with the jeering challenge ‘Come on you rascals, you bloody backs, you lobster scoundrels, fire if you dare…’”

British soldiers were also called “redcoats” but this nickname wasn’t an insult. Although some sources state that British soldiers were also called “lobster backs,” there is actually no evidence that this nickname was ever used at the time of the revolution and it instead appears to be an invention of the 19th century, according to a guest post by Christopher Lenney on the Boston 1775 blog:

“In America’s Historical Newspapers online, the first documented uses of ‘lobsterback’ that I can find are in 1812-13 in The Tickler of Philadelphia:
8 Sept 1812: a satirical poem refers to ‘General Lobsterback.’
22 Sept 1812: ‘If the democrats would fight as hard as chatter and drink grog, there would not be a lobsterback in all Quebec, in less than forty-five days.’ And about a man going privateering, ‘Perhaps he may in that station, scald the lobster-back rascals.’
26 Jan 1813: a letter quoted the city’s mayor saying, ‘Who cares for a parcel of d——d lobster back rascals and tories?’”

6 thoughts on “British Soldiers in the Revolutionary War”