In 1863, after John Wilkes Booth made a small fortune as a popular stage actor, he bought property in the newly created Back Bay neighborhood in Boston, Massachusetts intending to build a house on the lot.

Although Booth was a national star, he was especially popular in Boston, a city he loved for its charm and culture, and had performed in numerous plays at the local playhouse, the Boston Museum.

Booth sent a letter to his friend Joseph Simmonds, a teller at Boston’s Mechanics Bank, who was helping him with his land purchase, on April 3rd of that year inquiring about the lots for sale along Commonwealth Avenue:

“Dear Joe, Did you or Orlando send me that catalog of Back Bay lands to be sold April 9th. However, find out about them. For lots No. 5,6,7 or 9 (any one of them) on the north side of Commonwealth Avenue. I will bid as high as $2.70 per foot (their minimum value is $2.25). If you fail to get any one of the above, I will bid on corner lot (Commonwealth Avenue) No. 20. as high as $3.25 per foot. If you are not out bid and fail to get any of them, I will bid on any one (single lot) on south side of Marlborough Street as high as 20 percent above its minimum valuation (a corner lot preferred.) Attend to this, dear Joe. See Keach who said something about the auctioneer being sorry he did not know I wanted to buy last time. Let Orlando see this. Advise with him about it. He promised to buy from me, or to let me know about it. I don’t care about the lots on Marlborough St. If I buy one of them, it will be on spec. So if you miss Commonwealth Ave, strike light on the first….Yours truly, J. Wilkes Booth” 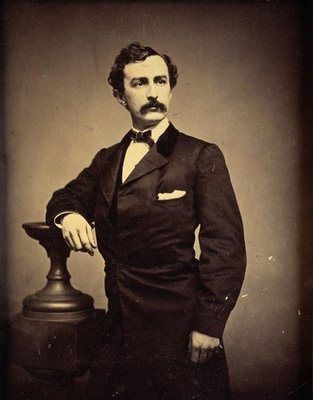 Booth purchased a lot, located at 115 Commonwealth Avenue, for $8,192 and placed it under his mother’s name, Mary Ann Booth. Around the same time he also bought $1,500 worth of Boston Water Co. shares.

The house Booth planned to build never came to fruition, probably due to a bad oil investment he made in Pennsylvania in 1864 that seriously depleted his fortune.

Since Booth never built his house in Boston, he stayed at the Parker House hotel the last time he visited the city, on April 5 and 6 of 1865, just ten days before he killed Abraham Lincoln, and was seen practicing shooting his pistol at a nearby shooting gallery on the corner of Chapman and School streets.

In 1867, Mary Ann Booth gave the Commonwealth avenue lot to her other son, Dr. Joseph Adrian Booth, according to the website BackBayHouses.org.

Dr. Booth later sold the lot to a dry good merchant, named Walter Hastings Jr, who built a large house on the property that still stands today. The building was eventually subdivided into apartments after the 1970s.

The building was recently up for sale, with an asking price of $11,500,000, according to the Classic Realty web site.

In a strange coincidence, Booth’s nemesis, Abraham Lincoln also had connections to Massachusetts when it was later discovered that he descended from colonists who settled in Massachusetts in the 17th century.

Even stranger, the man who later killed Booth, Boston Corbett, also had connections to Boston after he moved there in the 1850s, had a religious conversion there and changed his name from Thomas to Boston in honor of the city.