Abraham Lincoln was born in Kentucky and grew up in Indiana yet he had deep New England roots.

Although Lincoln was never able to confirm it during his lifetime, he descended from English colonists who settled in the Massachusetts Bay Colony in the 17th century.

Lincoln’s first ancestors to settle in New England was his 4th great-grandfather Samuel Lincoln, a weaver by trade, who sailed from Norwich, England to the Massachusetts Bay Colony in 1637.

Samuel Lincoln lived briefly in Salem, Ma where he was either apprenticed or indentured to a weaver named Frances Lewis, before moving to Hingham by the end of the year, where his older brother Thomas lived.

There he married Martha Lewis, with whom he had 10 children, and attended the Old Ship Church. Samuel Lincoln’s son Mordecai was born in 1657 and later grew up to be a blacksmith. 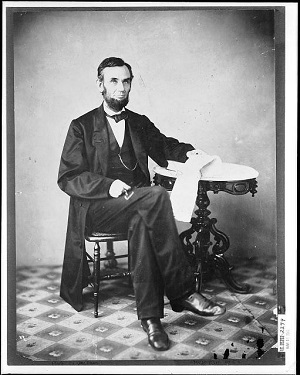 According to the book Abraham Lincoln: An American Migration, Mordecai was also a foot soldier in Hingham in 1679. Mordecai owned a gristmill that still stands today and is now known as the Lincoln Mill Antique Shop.

It was Mordecai’s son, also named Mordecai, who started the family’s migration out of New England by moving to Monmouth County, New Jersey and later Pennsylvania.

Each generation of Lincolns after that continued to move around the country, first to Virginia and then to Kentucky where the president was born.

Over the years, the Lincoln family history was lost and as a result, Abraham grew up knowing nothing about his New England roots.

In 1848, while Abraham was working as a Congressman, Solomon Lincoln of Hingham contacted him to inform him he may be related to the Lincolns of Hingham.

With the limited resources and records at the time, neither Solomon or Abraham could confirm this. Solomon later published an article about the Lincoln family, Notes of the Lincoln Families of Massachusetts, which discusses the possible connection.

Abraham Lincoln also had other family connections to New England. Lincoln’s father, Thomas, had two cousins in Boston, Amos and Jedidiah, who married Paul Revere’s daughters and served in the American Revolution. This connection meant that Abraham Lincoln was related to Paul Revere through marriage.

Since Amos and Jedidiah were also descendants of Samuel Lincoln of Hingham, it is possible that Solomon told Abraham of the Lincoln connection to the Revere family.

It turns out, Lincoln wasn’t the only notable 19th century figure with connections to Massachusetts. Lincoln’s assassin, John Wilkes Booth, bought property in the Back Bay of Boston in 1863 and made plans to build a house there, although the house was never built. Booth was spotted in Boston, about a week before the assassination in April of 1865, practicing shooting his gun at a local firing range.

Also, the man who later killed Booth, Boston Corbett, had connections to Massachusetts too after he moved to Boston in the 1850s, and had a religious conversion which prompted him to change his name from Thomas to Boston in honor of the city.