Margaret Jones was a midwife from Charlestown and the first person to be executed for witchcraft in the Massachusetts Bay Colony.

The only information that exists of Jones’ case comes from two sources, Governor John Winthrop’s journal and Reverend John Hale‘s book A Modest Enquiry in to the Nature of Witchcraft.

According to Winthrop’s journal, Jones was accused in 1648 by some of her patients who stated that she told them they would never heal if they refused to take her medicine.

When her patient’s illness and injuries didn’t heal, many began to suspect Jones of witchcraft, leading to her accusation in the spring of 1648.

Yet, according to John Hale’s book A Modest Enquiry into the Nature of Witchcraft, Jones was accused after quarreling with some neighbors:

“Several persons have been charged with and suffered for the crime of witchcraft, in the governments of the Massachusetts, New-Haven, or Stratford and Connecticut, from the year 1646, to the year 1692.

The first was a woman of Charlestown, Anno 1647 or 8. She was suspected partly because that after some angry words passing between her and her neighbors, some mischief befell such neighbours in their creatures, or the like; partly because some things supposed to be bewitched, or have a charm upon them, being burned, she came to the fire and seemed concerned.

The day of her execution. I went in company of some neighbours, who took great pains to bring her to confession and repentance. But she constantly professed herself innocent of that crime: Then one prayed her to consider if God did not bring this punishment upon her for some other crime, if she had not been guilty of stealing many years ago?

She answered, she had stolen something, but it was long since, and she had repented of it, and there was grace enough in Christ to pardon her that long ago; but as for witchcraft she was wholly free from it, and so she said unto her death.”

The evidence used against Jones was gathered using Matthew Hopkin’s witch-hunting manual, “The Discovery of Witches,” published just a year earlier, which advises “watching” a witch for a period of 24 hours to see if the witch’s imp, or familiar, comes to feed.

Jones was watched on May 18, 1648 and Winthrop stated an imp appeared “in the clear day-light.” 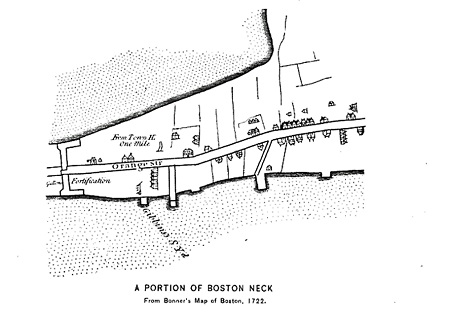 Boston Neck in 1722. The Boston gallows were located left of the fortification

Winthrop recorded all the evidence he gathered against Jones and the outcome of her trial in his journal, which states:

“At this court, one Margaret Jones, of Charlestown, was indicted and found guilty of witchcraft, and hanged for it. The evidence against her was:
1. That she was found to have such a malignant touch, as many persons, men, women, and children, whom she stroked or touched with any affection or displeasure, or etc. [sic], were taken with deafness, or vomiting, or other violent pains or sickness.
2. She practising physic, and her medicines being such things as, by her own confession, were harmless, — as anise-seed, liquors, etc., — yet had extraordinary violent effects.
3. She would use to tell such as would not make use of her physic, that they would never be healed; and accordingly their diseases and hurts continued, with relapse against the ordinary course, and beyond the apprehension of all physicians and surgeons.
4. Some things which she foretold came to pass accordingly; other things she would tell of, as secret speeches, etc., which she had no ordinary means to come to the knowledge of.
5. She had, upon search, an apparent teat … as fresh as if it had been newly sucked; and after it had been scanned, upon a forced search, that was withered, and another began on the opposite side.
6. In the prison, in the clear day-light, there was seen in her arms, she sitting on the floor, and her clothes up, etc., a little child, which ran from her into another room, and the officer following it, it was vanished. The like child was seen in two other places to which she had relation; and one maid that saw it, fell sick upon it, and was cured by the said Margaret, who used means to be employed to that end. Her behavior at her trial was very intemperate, lying notoriously, and railing upon the jury and witnesses, etc., and in the like distemper she died. The same day and hour she was executed, there was a very great tempest at Connecticut, which blew down many trees, etc.”

Jones was hanged from a tree on June 15, 1648 at Gallow’s Hill on Boston Neck, a narrow stretch of land connecting Boston peninsula to the mainland. Winthrop made note in his journal that a storm hit Connecticut the day of her execution, which was the state’s first tornado.

Jones’ husband, Thomas, had also been accused of witchcraft and arrested but was released after his wife’s execution. According to Winthrop’s journal, Thomas tried to leave the colony on a ship called the “Welcome” but it had a heavy load and had trouble keeping its balance.

When it became known that the husband of a convicted witch was on board, the captain quarreled with him and he was arrested and taken off the ship, after which, the ship reportedly stayed upright.

About 80 people were accused and arrested for witchcraft in New England between the years 1647 and 1688 and 12 were executed before a new witch hunt began a few years later in Salem in 1692.

Coincidentally, Reverend John Hale played a big part in bringing the Salem Witch Trials of 1692 to an end after his own wife was accused of witchcraft during the hysteria. 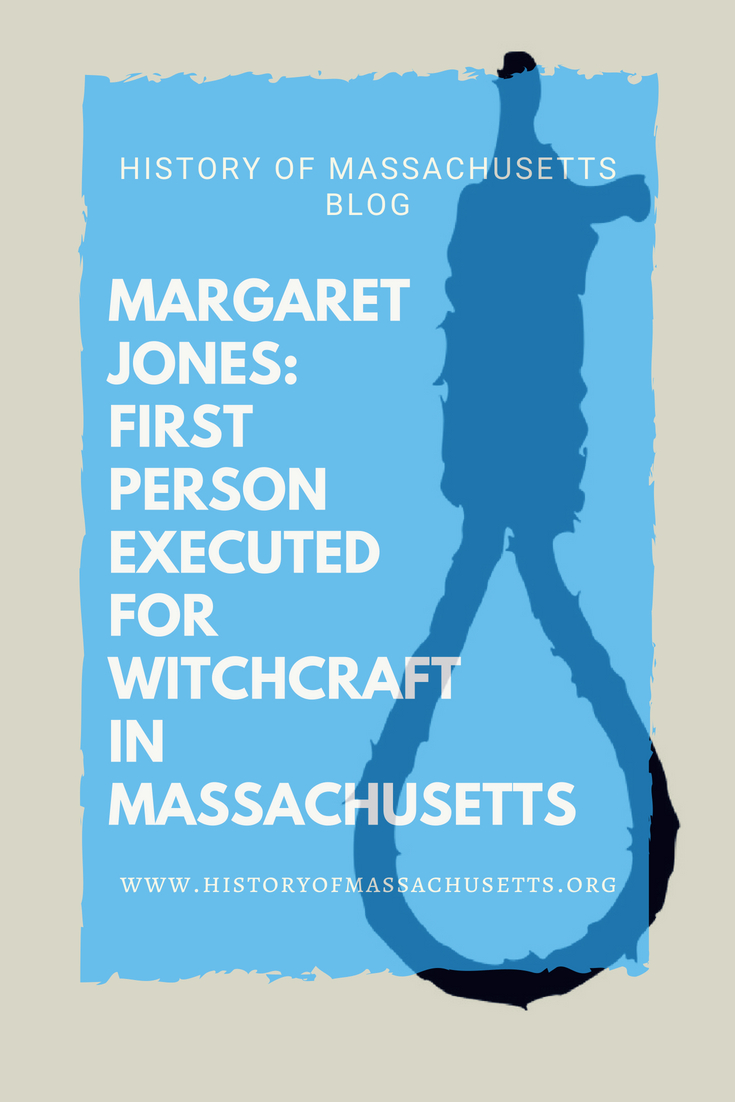