The Omni Parker House hotel is said to be the most haunted hotel in Boston. Originally built in 1855 and then rebuilt in 1927, the building is one of many historic hotels in Boston.

The hotel is also located across the street from the historic King’s Chapel and its graveyard which, as the oldest graveyard in Boston, is also believed to be haunted.

The Omni Parker House Hotel consists of two buildings, the main building and a ten floor annex behind it, on the corner of Chapman Place and Bosworth Street.

The following is an overview of the Omni Parker House haunting stories:

The 10th floor of the annex is believed to be haunted by numerous ghosts, including by Harvey D. Parker himself, according to Susan Wilson in her book Heaven by Hotel Standards: The History of the Omni Parker House:

“In a way, Harvey Parker has remained a constant at his world-famous hotel and restaurant. He has, that is, if you believe in spectral evidence. ‘I first heard about the ghost of Harvey Parker when I began working here in 1941,’ explained longtime bellman, the now-deceased John Brehm, in a 1992 Boston Globe interview. ‘They used to say he roamed the halls on the tenth floor annex. There were many stories, but one in particular happened around 1950. An elderly woman guest insisted she saw an apparition outside room 1078. At first it was a misty apparition in the air, then it turned toward her. She said it was a heavy-set older man with a black moustache. He just looked at her, then faded away. She came downstairs, a bit jittery, and security went up to the tenth floor. They checked it out, but reported they could find nothing.’”

A bearded man dressed in colonial clothing has also been seen on the 9th and 10th floors and even once appeared at the end of a guest’s bed in room 1012. 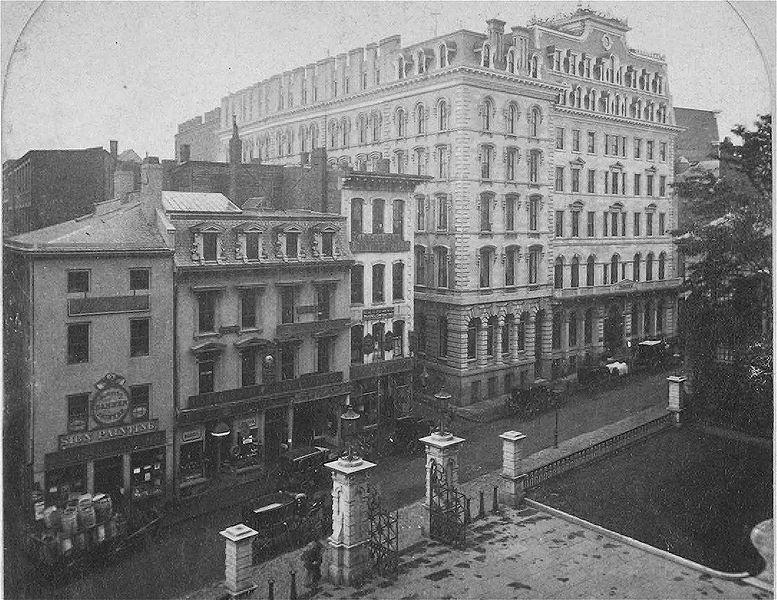 The Parker House, Boston, Mass, circa 1866. The annex building can be seen in this photo at the back of the hotel.

Hotel staff seem to think it is Parker, although it is not clear why since Parker lived in the 19th century and wouldn’t have worn colonial clothes. Strange orbs and lights have also been spotted on these floors.

Another area of the hotel that is reportedly haunted is the third floor in the main building. Over, the years, elevator Number One is said to repeatedly arrive on the third floor and open its doors but no one is in it and no one called it. This is said to have happened hundreds of times over the years.

A reporter for the American Statesman, Becca Hensley, confirmed this weird occurrence when she stayed there in 2010 to research an article, titled Boston’s Scariest Haunts:

“Nevertheless, my elevator does send itself several times to the third floor — though I don’t push the button — and when I arrive nobody is waiting. ‘Ah, yes,’ says the woman at the front desk, as if it’s nothing. ‘That elevator’s been doing that since Charlotte Cushman died there.’ Apparently, Charles Dickens also lived on the third floor, practicing his literature-circuit speeches in a mirror that now hangs in the hotel’s mezzanine. Some say his visage appears there still.”

Charlotte Cushman apparently died of pneumonia, during a long battle with breast cancer, in her room on the third floor of the hotel on the morning of February 18, 1876, according to an article in the Daily Journal published in 1876:

“Boston, Feb. 18 – Noon – Charlotte Cushman, the actress, died at the Parker House this morning…Charlotte Cushman, who had been afflicted with cancer for a long time, was better last week and took a short walk on Saturday last, when she took cold and pneumonia resulted. She was quite cheerful yesterday, but a change occurred at two o’clock this morning, and at 7 she became unconscious and death followed.”

Cushman is said to have haunted the third floor ever since.

The hotel’s most well-known ghost reportedly haunts the former room 303 on this floor. The story is that in 1949, a liquor salesman killed himself in this room by mixing whisky with barbiturates.

Guests have since reported the smell of whisky and the sound of raucous laughter in the room. After repeated complaints from guests, the room was later converted into a storage closet.

Many people believe that Stephen King’s short story 1408 is based on the haunting of room 303. The story is that King often stays at the Parker House when he comes to Boston for Red Sox games. During one of these visits he reportedly heard about the haunting and decided to write a short story about it.

The short story is about a writer who is doing research for his non-fiction book, Ten Nights in Ten Haunted Hotels, and spends the night in a hotel room where a number of deaths have occurred.

Yet, the author of the book Heaven by hotel standards asked King’s assistant, Marsha DeFlippo,whether this is true and she debunked it, explaining: “It’s just a rumor. And he doesn’t stay at the Parker House when he’s in Boston.”

A number of strange occurrences have also happened on the mezzanine-level in the main building. A mirror that was once in Charles Dickens’ room, which he is said to have practiced his reading of the Christmas Carol in front of for his sold-out American tour, is now located in a hallway on this level, next to the press room, and is believed to be haunted by Dickens himself.

The mirror is four feet wide and six feet tall with an ornately carved frame and features a plaque that states the mirror has been authenticated as Dicken’s mirror by the Boston Dickens Fellowship.

The mirror is said to do odd things when guests say “Charles Dickens” in front of it three times. Also, a staff member once witnessed a spooky occurrence in the mirror and refuses to touch it now, according to Sam Baltrusis in his book Haunted Boston Harbor:

“’This mirror is the one that Charles Dickens used to practice his orations in front of,’ said Jeffery Doucette, a veteran tour guide. ‘Not long ago, a worker began to clean the mirror, and he kept seeing condensation appear on the glass right next to him, as if someone was breathing on it. He hasn’t cleaned the glass since.’”

Another employee, Manager of Guest Services, Seamus Murphy, said he also had a ghostly encounter on the mezzanine-level in a storage closet, according to an interview he gave to the author of the book Heaven by Hotel Standards:

“’I heard stories about ghosts here, but in twenty-two years as a bellman never had an experience of my own. Around 2010, though, there was an event…you know the Saturdays with Seamus program I give?’ he asks….’Well, we were in the Longfellow room, and I usually speak from a podium, but there was none there. I went to the storage room on the mezzanine level and heard a gruff voice yell out, ‘What do you want??!’ I thought it was a houseman at first. But there was nobody on the floor. Nobody at all. And the voice sounded just like a bell captain that used to work here. He had been a drinker, and sometimes after work hours, he’d go off to some bar, then wander back into the hotel late at night, and hide out here in some sliding closet. So I thought it was probably him. Yeah, it really sounded exactly like him. Except for the fact that he’s dead.’”

If you have any doubts that the Omni Parker House is haunted, just remember what poet Oliver Wendell Holmes poem wrote about the hotel in his 1884 poem titled At the Saturday Club:

“Such guests!
What famous names its record boasts,
Whose owners wander in the mob of ghosts!”

If you want to find more haunted locations in Boston, check out the following list of haunted hotels in Boston.