In addition to Boston’s many historic sites, the city also has a lot of historic hotels.

These hotels date from around the mid-19th century to the early 20th century, during the second phase of the industrial revolution in Massachusetts, and have had many famous guests and visitors over the centuries, some of which reportedly still haunt these hotels.

Not only are these hotels historic, but they are also considered some of the best in the city and have great ratings and reviews.

The following is a list of historic hotels in Boston:

The building was designed by architect Ammi B. Young and was a cruciform (cross shaped) Greek Revival building that featured a Greek Doric portico with a Roman dome. 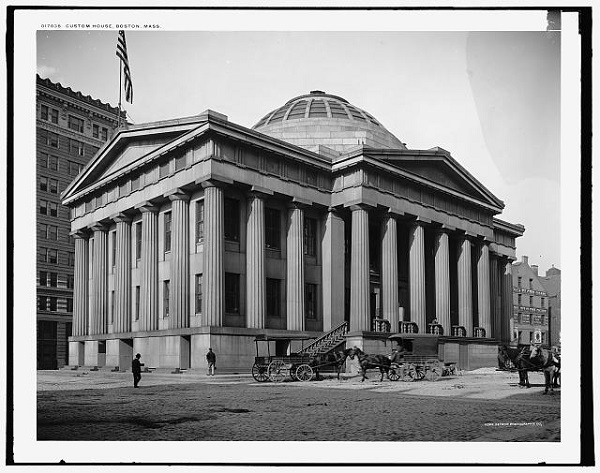 The Boston Custom House circa 1900

Since the building was constructed on a landfill, the structure is supported by 3,000 wooden piles that extend down to the bedrock.

In the early 20th century, increased shipping created a need for expansion of the custom house, so the Peabody and Stearns architecture firm started construction a 26-floor tower on the Custom House in 1913. The addition was completed in 1915 and made the Custom House the tallest building in Boston at the time. 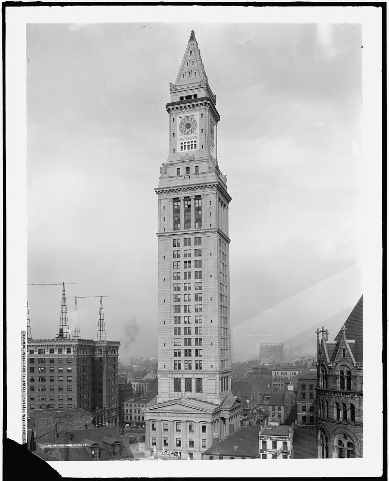 In 1986, the United States Customs Service moved to the Thomas P. O’Neill, Jr, Federal Building and the following year, the city of Boston purchased the Custom House from the General Services Administration.

The building was added to the National Register of Historic Places in 1973 and was also designated a Boston landmark in 1986.

In 1997, the building was converted into an 84-room hotel by Marriott Vacation Club International. A small museum dedicated to the hotel’s history is located in the rotunda on the 2nd floor.

The original Parker House hotel was built on this spot in 1855, but the current Omni Parker House Hotel replaced it in 1927.

Since the hotel has operated on the same spot since 1855, it makes it the longest continuously operating hotel in the U.S. The hotel’s restaurant, Parker’s Restaurant, is also one of the oldest restaurants in Boston.

Many famous people have worked at the hotel, such as Vietnamese Communist leader, Ho Chi Minh, who worked as a pastry chef in the basement kitchen from 1912 to 1913, and civil rights activist, Malcolm X, who worked as a bus boy for the restaurant in 1940. 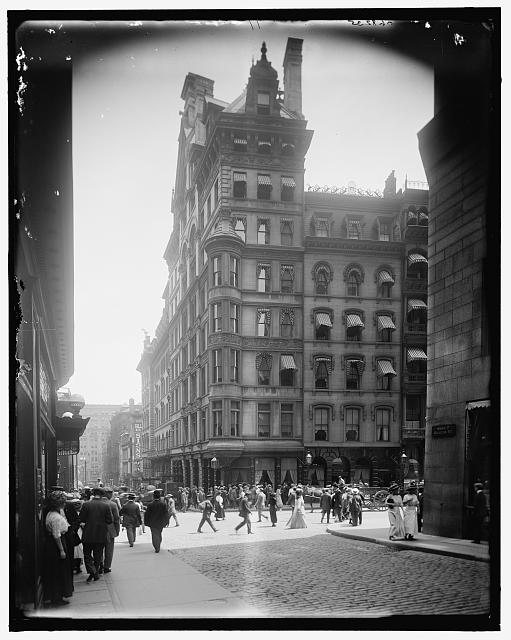 The Parker House was also a literary hot spot. Ralph Waldo Emerson, Nathaniel Hawthorne and Henry Wadsworth Longfellow were members of the literary Saturday Club which regularly met in the hotel’s restaurant. Charles Dickens also stayed at the hotel during his 1867-68 American lecture tour and often joined the Saturday Club’s meetings.

The Parker House was also where John Wilkes Booth reportedly met with representatives of the Confederate Secret Service, on July 26, 1864, to plan the abduction of Abraham Lincoln and, after that plan fell apart, it is where he stayed on April 5 and 6, 1865, just a week before he assassinated Lincoln.

While staying at the hotel, eyewitnesses later reported that they saw Booth at a nearby shooting gallery, presumably Roland Edwards’ Pistol Gallery on Green Street, practicing his pistol shooting.

In addition, the Omni Parker House is where John F. Kennedy proposed to Jackie Bouvier (at table 40), held his bachelor party and announced his candidacy for the U.S. Congress in 1946.

Omni Parker House is a member of Historic Hotels of America, which is a program of the National Trust for Historic Preservation that celebrates historic hotels in the U.S.

Built in 1851, the Liberty Hotel was originally the Charles Street Jail. The jail was built out of granite and was originally constructed in the shape of a cross, with four wings extending from a central rotunda with a 90-foot atrium. Each wing was segregated by gender and by category of offense. 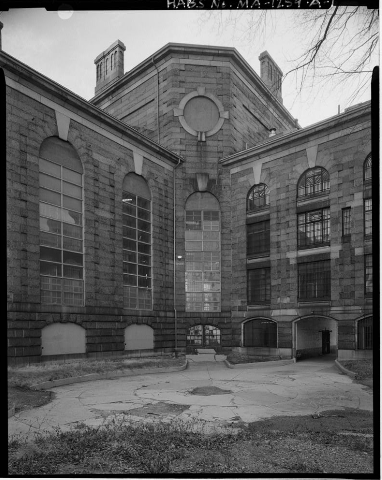 The jail housed a number of famous inmates such as the Boston Strangler, Albert DeSalvo,  as well as John White Webster, James Michael Curley, Malcolm X and Sacco and Vanzetti.

The jail also housed suffragists who protested during President Woodrow Wilson’s visit in 1919 and World War II POWs from the German submarines U-234 and U-873, one of whom died in the jail.

In 1973, the prisoners of the Charles Street Jail revolted due to overcrowding and poor living conditions and the jail was declared unfit and in violation of the inmate’s constitutional rights. The prisoners were moved to a new jail in Suffolk County in 1990.

In 1991, Massachusetts General Hospital purchased the property and sought proposals for its reuse.

In 2001, Carpenter & Company signed a lease agreement with MGH for the land and the jail. The building was renovated but kept its granite exterior, large three-story arched windows, and 90-foot atrium while the jail’s former exercise yard was turned into a private, landscaped courtyard.

The building officially opened as the Liberty Hotel in September of 2007 after a $150 million renovation.

The jail is listed on the state and national Register of Historic Places.

Built in 1891, the Copley Square Hotel is the second-oldest operating hotel in the country and was the first hotel in the Back Bay. Since the Back Bay was built on a landfill, the hotel is supported by 70 pilings that reach 70 feet below the street level. 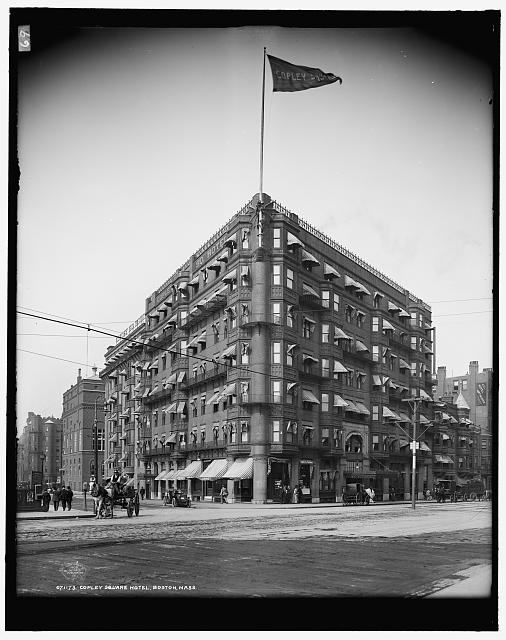 The seven story hotel was designed by architect Fred R. Pope and was constructed out of brick. It features an architectural mix of Italian Renaissance and Beaux Arts style.

The hotel has hosted many famous celebrities from Babe Ruth to President McKinley and Jazz legends Billie Holiday, Ella Fitzgerald and Duke Ellington performed in the hotel’s Storyville club after it relocated to the hotel in 1953.

The Storyville club was later replaced by a Hungarian restaurant, called Cafe Budapest, where a scenes from the 1992 Goldie Hawn and Steve Martin film “HouseSitter” were filmed. The restaurant closed in 2000 and the space later served as another music club before being renovated into a lobby.

Originally constructed in 1889 but not completed until 1893, the Ames Boston Hotel was originally the corporate headquarters of the Ames Agricultural Tool Company and was Boston’s tallest building until 1915, when the Custom House tower was built, thus making it Boston’s first skyscraper. 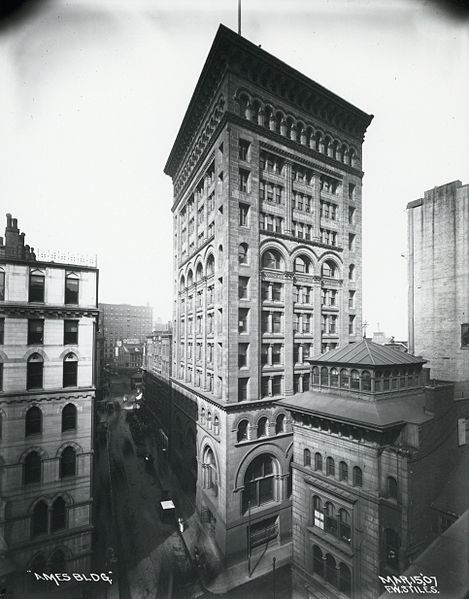 The structure was built from sandstone sourced in Ohio and was designed by architecture firm of Shepley, Rutan and Coolidge in the Richardsonian Romanesque style. The masonry façade consists of detailed blue slate and red sandstone with intricate decorative carvings.

The building housed the corporate headquarters of the Ames Agricultural Tool Company until the 1950s, as well as the offices of Shepley, Rutan and Coolidge, from 1893 to 1981. It then housed offices of various companies for several years but remained unoccupied from 1999 until it was purchased in 2007 and turned into a luxury boutique hotel.

The building was listed on the National Register of Historic Places in 1974.

Built in 1897, the Boston Hotel Buckminster was one of the oldest hotels in the city. The hotel was designed by architect Stanford White, who also designed the Boston Public Library and many of the townhouses on Beacon Street. 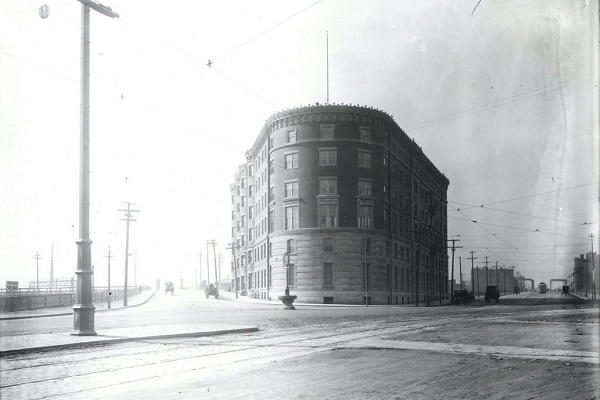 In 1919, an infamous crime took place in a room at the Buckminster when a bookie, named Joseph “Sport” Sullivan met with the Chicago White Sox first baseman, Arnold “Chick” Gandil, and hatched a plan to fix the 1919 World Series.

The crime, later known as the Black Sox Scandal, led to the lifetime banishment of eight baseball players, including Shoeless Joe Jackson, and led to creation of the Commissioner system in Major League Baseball.

Buckminster was also the site of the first network radio broadcast in 1929. After WNAC Radio moved into its new studios in the hotel in July of that year, they later transmitted their first broadcast using a 100-foot antenna connected to the building’s roof with a clothesline.

In the 1940s, a portion of the building was turned over to a detachment of military police and held Italian POWs during World War II.

In 1950, Boston native George Wein opened a music venue at the hotel, called Storyville. Many famous Jazz musicians performed at the venue, such as Billie Holiday, Charlie Parker, Louis Armstrong, Dave Brubeck and Charles Mingus. The club relocated to the Copley Square Hotel in 1953. Today, the space is now occupied by a Pizzeria Uno.

Built in 1900 by hotelier Lucius Boomer, the Lenox Hotel cost $1.1 million to construct and, at 11 stories high, it was the tallest building in Boston at the time. When it was built, the Boston Post called it the Waldorf-Astoria of Boston, a reference to its owner who also owned the famous Waldorf-Astoria in New York. 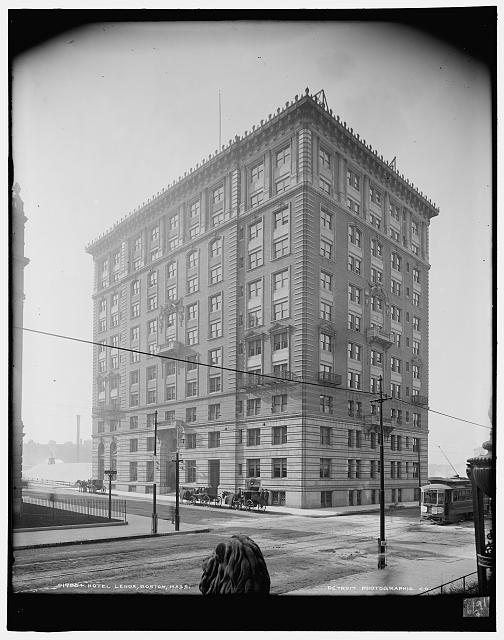 The Lenox hotel was constructed in a Beaux Art style and features red and white terra-cotta bricks. Some of the rooms still have functioning wood-burning fireplaces and the hotel is one of few known buildings in the world with a functioning Cutler mail chute.

The hotel has had many famous guests, such as actress Judy Garland, who stayed there for a couple of months in 1965. The room she stayed in is now called the Judy Garland Suite.

The Lenox Hotel is a member of the Historic Hotels of America. 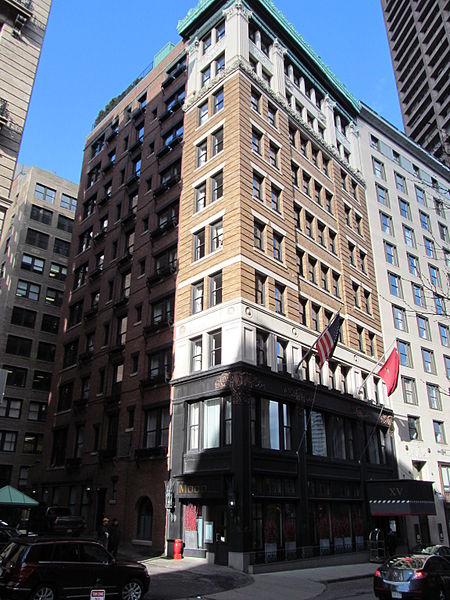 The commission occupied the building until the commission folded in 1916. In 1920, the city of Boston seized the property by eminent domain and used it to house the Boston School Committee from 1923 until 1999 when it was purchased and converted into the XV Beacon hotel.

The building’s granite foundation is original and dates back to 1722 when a mansion, owned by local merchant and patriot Edward Bromfield, sat on the spot.

The hotel also has an extensive art collection, which includes an ancient Roman mosaic dating from around the fourth or fifth century A.D., paintings by Gilbert Stuart and a modern painting by abstract painter Jules Olitski.

Built in 1912, the Fairmont Copley Plaza was constructed on the original site of the Museum of Fine Arts. The hotel was designed by architect Henry Janeway Hardenbergh, who also designed the Plaza Hotel in New York and the Willard Hotel in Washington D.C. 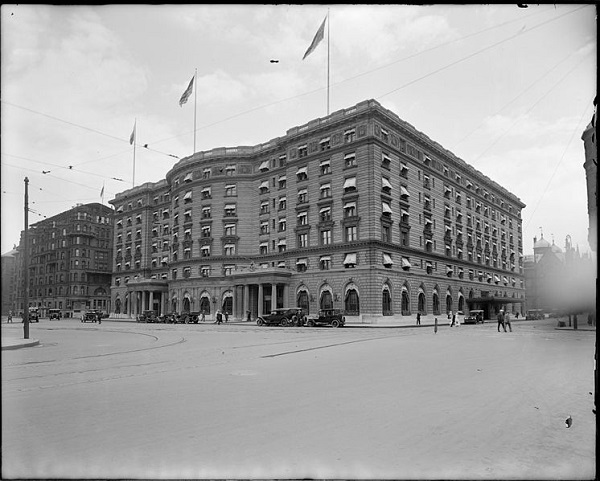 Nearly every U.S. President since Taft have stayed at the Fairmont Copley Plaza as well as celebrities such as Frank Sinatra to Tom Cruise. The hotel has also been featured in two films, The Firm and Blown Away.

The hotel features eight suites themed around Boston’s history and culture. The partners for this project are the JFK Library and Museum, the Museum of Fine Arts, the Boston Symphony Orchestra, the Boston Public Library, the Museum of Science, the Boston Pops, the Freedom Trail and the Sports Museum.

Fairmont Copley Plaza is a member of Historic Hotels of America, which is a program of the National Trust for Historic Preservation that celebrates historic hotels in the U.S.

Built in the 1920s, the Loews Boston Back Bay hotel was once the Boston Police Headquarters. The seven story, 73,250-square building was constructed out of limestone. 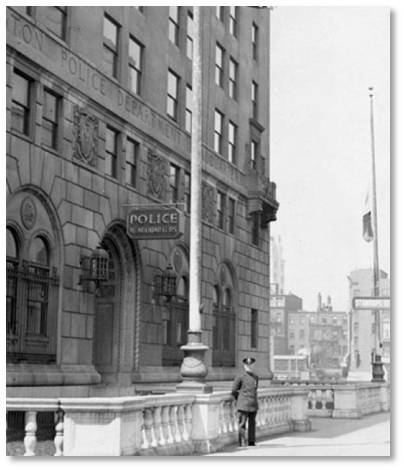 In 2002, the Boston police sold the building to the Saunders Hotel Group, who also owns the Copley Square Hotel and the Lenox Hotel, for the price of $14 million. Proceeds from the sale went to funding affordable housing in Boston.

The building was converted into a hotel and features 220 rooms. The hotel’s bar is named Cuffs, in honor of the building’s history, and the lobby features black-and-white photographs from its time as the police headquarters. The words “City of Boston Police Department Headquarters” are still engraved on the exterior of the building above the main entrance.

Built in 1922, the Langham Hotel was originally the first Federal Reserve Bank of Boston. The building, which was designed by architect R. Clipston Sturgis, features Renaissance Revival style architecture and was based on the Palazzo della Cancelleria in Rome. 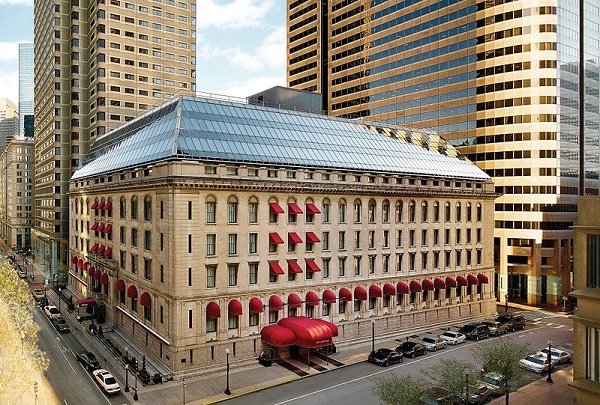 In the interior of the building, the former bank vault is now a pastry kitchen, the Governor’s reception room contains two historic N.C. Wyeth murals and a Norman B. Leventhal Map collection of historic Massachusetts maps and the original entry doors from Pearl Street still contain gold coin moldings.

The hotel was designed a Boston Landmark in 1978.

For more information on historic places in Boston, check out this article on the 10 oldest buildings in Boston.