The marker, which is made up of 13 rings of cobblestones and a center stone marked with a star, had been on a traffic island in front of the Old State House for decades but in 2011 it was removed and placed at its current location at the intersection of Congress, Devonshire and State Streets, which is on the sidewalk in front of the Old State House.

The sidewalk there was also expanded to make room for the memorial and the stones were placed inside a bronze ring to make it more noticeable.

This is not actually the original location of the marker, nor is it the actual site of the Boston Massacre. The marker was originally placed on the corner of State and Exchange street in 1887 to mark the exact spot where one of the victims of the Boston Massacre, Crispus Attucks, fell dead after being shot by British soldiers.

“During the mayoralty of Dr. Samuel Abbott Green, the Municipal Government adopted the policy of marking important historical sites by memorial tablets. It is not always safe to leave the verification of such spots to tradition, or even to descriptions on the printed page. They should be designated in a manner that will leave no room for doubt in the future, and only a monument in some form will do this. The Society felt that the place ought to be thus marked, (almost under the shadow of this building), where the so called Boston massacre occurred, March 5, 1770. This event was commemorated by the people of the town, by an annual oration, until the Fourth of July was made the day for patriotic celebration, when the observance of the earlier day ceased. A recommendation was made to the City Government, which was courteously received and promptly acted upon; and under the direction of the Committee on Paving and the Superintendent of Streets, the stones in State Street, near the corner of Exchange Street, were laid, last summer, in the form of a wheel, to mark the precise spot where the first blood in the Revolutionary struggle was shed. It was., then suggested that the Society should erect a tablet near by, to explain the designation in the pavement; and having obtained permission from the proprietors, it placed a bronze tablet, suitably inscribed, on the front walls of the Merchants Bank Building, in October last.” 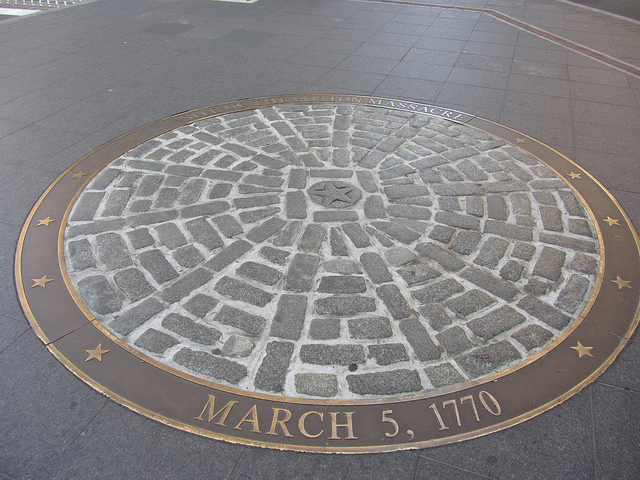 The city government in 1904 apparently was not as concerned with doubt and accuracy and removed the stones to allow construction of the Boston subway underneath and then moved them to a nearby site where another victim, James Caldwell, had died.

During the 1960s, the city underwent an urban renewal that led to the relocation of many streets, during which the memorial was moved to a traffic island in front of the Old State House.

The stones were removed again in 2011 in order to upgrade the State Street subway station underneath and were placed at its current location at the intersection of Congress, Devonshire and State Streets.

The Boston Massacre occurred on the night of March 5, 1770 when five people died after British soldiers fired into a crowd of people outside the state house.

The victims were Crispus Attucks, Samuel Gray, James Caldwell, Samuel Maverick and Patrick Carr. Anti-British sentiment was high at the time due to the large presence of British soldiers in the city.

A group of citizens had gathered outside of the state house, which was the seat of the British government at the time, that night and an argument ensued between one person in the crowd and a guard standing outside.

After the guard struck the citizen, the group started to throw snowballs, sticks and rocks at the guards. Chaos ensued and shots were fired into the crowd. The attack was an accident but it further damaged the relations between colonists and the British government.

A trial was held for the eight soldiers involved, with John Adams serving as their lawyer, and all but two were acquitted of murder charges.

The two that were convicted were physically branded with a “M” on their right thumb for manslaughter. They narrowly escaped the death penalty by invoking the “benefit of the clergy” – a medieval law that exempted clergymen from secular courts.

The name ‘The Boston Massacre” is only a recent nickname. Paul Revere nicknamed it the Bloody Massacre in King Street (the former name of State Street) after the deaths and during the early 1800s it was known as the State Street Massacre.