Concord, Massachusetts was home to a famous group of writers in the 19th century.

The writers wrote many famous books, essays and poems and had a significant impact on literature in the 19th century.

As a result, they have often been compared to another famous literary group, the Bloomsbury Group of London, so much so that a book was even written about them in recent years titled American Bloomsbury.

Much like the London Bloomsbury Group, the Concord writers had a shared set of values, morals, beliefs and a shared appreciation for art and literature. They were abolitionists, transcendentalists, nature lovers as well as writers and poets. 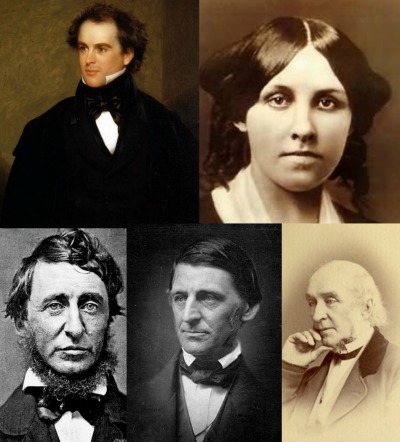 A few of them, such as Louisa May Alcott, Nathaniel Hawthorne and Ralph Waldo Emerson, also had deep New England roots and Alcott and Hawthorne were even descended from some of the judges in the Salem Witch Trials of 1692 (although they found this deeply shameful.)

How Did the Concord Writers Meet?

The writers met in the small rural town of Concord, Massachusetts, which is about 20 miles north west of Boston. At the time that they lived there, the town was mostly known for its role in the American Revolution after the Battle of Concord took place there in 1775.

Not all of the Concord writers were originally from Concord but they ended up in the small town for a variety of reasons, according to the book The Story of Concord Told by Concord Writers:

“The fixing of his own residence in this town [Concord] by Emerson was due in part by ancestry, and still more to a perception of the fitness of the region for the abode of a poet and sage. The same perception, by Hawthorne, Alcott, Ellery Channing, and others, – together with the important fact that it was Emerson’s chosen retreat, – brought those literary men here. Thoreau, the most original and peculiar genius of the whole group, was born here, and never had much inclination to leave. Around Emerson this circle, with many who lived here temporarily, like Margaret Fuller and George William Curtis,…gathered as friends and brothers or else as disciples – and thus the name of Concord became associated, and justly, with a special and remarkable school of thought and literature.”

Louisa May Alcott was born in Germantown, Pa in 1832 but moved to Concord with her family in 1840. Her father, Amos Bronson Alcott, was friends with Ralph Waldo Emerson, who later helped the Alcott family find a house to purchase in 1845, the Wayside on Lexington Road.

Louisa May Alcott and her sister attended Concord Academy, a local grammar school, where she was taught by Henry David Thoreau and his brother, John. The school closed down a few years later after John Thoreau died of tetanus in 1842.

Alcott described her time in Concord as happy and idyllic:

“Those Concord days were the happiest of my life, for we had charming playmates in the little Emersons, Channings, Hawthornes, and Goodwins, with the illustrious parents and their friends to enjoy our pranks and share our excursions.”

Yet, although Alcott loved living in the countryside, she found the town a little too quiet at times, once writing of it: “Poor dull Concord. Nothing colorful has come through here since the Redcoats.”

Ralph Waldo Emerson was born in Boston in 1803 but moved to Concord in 1834 to live with his step-grandfather Dr. Ezra Ripley, at the Old Manse, a historic home built by Emerson’s grandfather, Reverend William Emerson in 1770.

In 1835 Emerson bought a house of his own in Concord, which still stands today and is now a house museum known as the Ralph Waldo Emerson house, on the Cambridge and Concord Turnpike.

Nathaniel Hawthorne was born in Salem, Mass in 1804 but moved to Concord in 1842 and rented the Old Manse with his new wife, an artist named Sophia Peabody. After befriending his neighbor, Ralph Waldo Emerson, Hawthorne was invited to meet Emerson’s circle of friends, including Thoreau and the Alcott family.

The Hawthornes eventually moved back to Salem, then to the Berkshires and various other towns in Massachusetts before traveling to Europe for a number of years and then returning to Concord where Hawthorne bought the Wayside from the Alcott family in 1852.

William Ellery Channing was born in Boston in 1818 but moved to Concord after marrying Ellen Fuller, the sister of transcendentalist writer Margaret Fuller, in 1842. In Concord, they lived in close proximity to the Old Manse where Nathaniel Hawthorne and his family were residing. Channing became walking companions with Emerson and Thoreau and many speculate that Channing is “the Poet” mentioned in Thoreau’s book Walden.

Out of all the Concord writers, Thoreau had the strongest connection to the town. He was born and raised in Concord and, aside from attending Harvard in Boston and taking a few trips to New York and other places, he never left the town. In his journal, Thoreau discussed his fondness for Concord:

“I have never got over my surprise that I should have been born into the most estimable place in all the world, and in the very nick of time too.”

The Concord Writers and the Transcendentalist Movement:

The Concord writers were a part of the Transcendentalist movement, which originated in Boston in the 1830s. Transcendentalism was a philosophical, literary and political movement based on the idea that people can obtain knowledge through intuition and imagination rather than through the senses of sight, hearing, touch and taste.

The movement started in 1836 with a group called the Transcendentalist Club, led by Ralph Waldo Emerson, which met at the home of George Ripley in Boston.

Other members of the Transcendentalist movement include Margaret Fuller, Henry Wadsworth Longfellow, Amos Bronson Alcott, Frederic Henry Hedge, Theodore Parker and Walt Whitman. The movement continued for the next 30 years but eventually came to an end in the 1860s.

The Concord Writers’ Books and Writing:

The Concord writers wrote some of the most famous and influential books of the 19th century.

Louisa May Alcott is most known for her novel Little Women, Nathaniel Hawthorne wrote many notable books such as the Scarlet Letter and the House of Seven Gables, Ralph Waldo Emerson’s most well known works are his volumes of poetry titled Essays, First and Second Series, as well as his poem the Concord Hymn which famously coined the phrase “the shot heard round the world” and Henry David Thoreau is most known for his book Walden.

Channing is the least known of the Concord writers but published many poems in his lifetime and is most known for his 1871 biography of Thoreau titled Thoreau, the Poet-Naturalist.

Concord has a total of five house museums: Orchard House, the Old Manse, the Wayside, Ralph Waldo Emerson House and Thoreau Farm. In addition, Concord is also home to Walden Pond, where Thoreau lived in his cabin, and the Concord Museum which has artifacts related to the Concord writers such as Thoreau’s cabin furniture, Emerson’s study and Alcott’s tea kettle.

Concord has since become something of a pilgrimage site for literary fans who come to visit the house museums. Thousands of tourists and fans flock to Concord every year to visit the museums, according to the book A Skeptic’s Guide to Writer’s Houses:

“In fact, it is a suburb that is ground zero for writer’s houses in America: Concord, Massachusetts. Over two hundred published writers call this small town home, and it is full of writer’s house museums – five in all. The town has been bringing tourists in to see these homes as far back as the 1840s, when the writers were still alive. Then, the Transcendentalist greats, Ralph Waldo Emerson, Henry David Thoreau, Bronson Alcott, and his daughter Louisa, all lived nearby, friends and neighbors, going back and forth from each other’s houses, and entertaining visiting literary tourists. By 1895, it was considered ‘another Strafford’ that ‘attracts more pilgrims than any other place of equal size upon the continent…to which come reverent pilgrims from the Old World and the New to worship at its shrines and to wander through the scenes hallowed by the memories of its illustrious litteratures, seers, and evangels.’”

These museums are open year round except for the Ralph Waldo Emerson house which is open April through October.

Where Are the Concord Writers Buried?

Visitors come to Concord not only to see the house museums but also to visit the Concord writer’s graves in the nearby Sleepy Hollow Cemetery. Hawthorne, Thoreau, Emerson, Channing and Alcott are all buried at Author’s Ridge near the back of the cemetery.

There, thousands of tourists each year visit the graves and leave behind flowers, notes and items such as pencils on the author’s graves. The cemetery is open year round and closes each day at dusk. 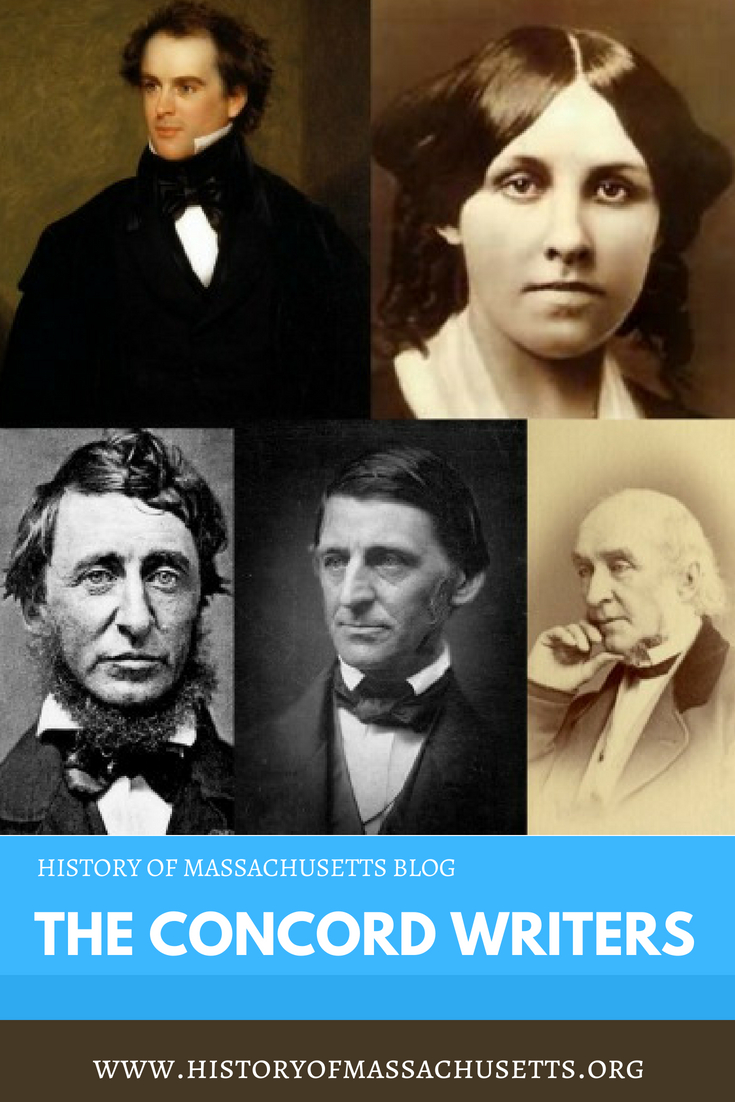