The province consisted of the former colonies of the Massachusetts Bay Colony, Plymouth Colony, and the territories of Maine and Nova Scotia as well as the islands of Martha’s Vineyard and Nantucket.

The Province of Massachusetts Bay was one of 13 British colonies in North America during this time period and was the seat of the British colonial government.

Massachusetts has become synonymous with the American Revolution because the first protests, riots and other acts of rebellion occurred there as did the first battles of the Revolutionary War.

The area was also home to many notable revolutionary-era icons, such as Paul Revere, John Adams, Samuel Adams and John Hancock. 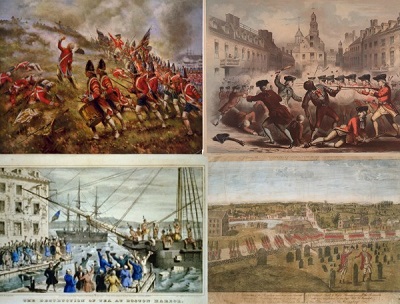 “The patriotic devotion which inspired all the American colonies in the inception, the progress, and the final triumph of the War of Independence was nowhere more conspicuous than in Massachusetts. To the intellectual resources of her sons were conjoined a spirit, a courage, and a zeal for liberty, which made an indelible impression upon the whole country, and still shine upon the page of history. It was upon Massachusetts soil that the first blood of the Revolution was shed; and it was from her patriotic sons that the earliest protests against arbitrary power were heard…”

Although Boston was considered the heart of the rebellion during the American Revolution, patriotic fever was widespread across the province and wasn’t just limited to Boston.

After Britain passed the Stamp Act in 1765, around 48 Massachusetts towns quickly joined Boston in instructing their representatives to oppose execution of the Stamp Act.

When Boston patriots decided to boycott British goods, in response to the Townshend Acts of 1767, they feared port cities like Boston would bear a disproportionate share of the costs of the boycott. They were pleasantly surprised though when, by mid-January 1768, twenty-four towns in the province joined the boycott.

British officials themselves also discovered that rural Massachusetts colonists were just as rebellious as Bostonians were after Britain passed the Massachusetts Government Act in 1774, which outlawed town meetings and appointed royal officials to the Governor’s council, according to an interview by Liz Covart with author John L. Bell, in an episode of the Ben Franklin’s World Podcast:

John Bell: Yes and not just allying but it became quite clear in August or September of 1774 that the people out in the rural parts of Massachusetts were even more militant at this point then the people in Boston. The trouble started in mid-August as the farmers in the most western part of the province forced the local courts not to hold sessions, forced the local magistrates to promise that they would not open the courts, they would not have any rulings, they would not fine anybody, they would not make any decisions under the new Massachusetts Government Act. That is not as well documented because it was out in the rural areas where there’s no newspapers but that became an inspiration for the next county to the east to do the same thing and it just rolled across the province with these crowds turning out to close the courts, as it’s called.”

Bell said the protests against the Massachusetts Government Act went much farther than closing the courts and affected all aspects of the local government:

“There were people who were refusing to serve on juries for the same reason or even earlier because the royal judges were taking salaries from the government in London. They also, as men would be appointed to be mandamus counselors in August and September of 1774, some of them were intimidated, some by violence, from taking the oath and agreeing to that so that when, by the end of the summer, the new governor General Thomas Gage, had only a partial counsel and a lot of people saying that they would rather not be involved at all. So there were lots of ways of protesting.”

After closing the courts, the colonists continued their protest of the Massachusetts Government Act by governing themselves through their own town meetings, contrary to the new law.

On August 24, 1774, Salem held a town meeting where they hosted the Massachusetts Provincial Congress and chose delegates to represent the town.

British officials tried to stop the meeting by calling up troops and stationing them near the town hall to frighten colonists away, according to Charles Moses Endicott in his book Account of Leslie’s Retreat at the North Bridge in Salem:

“In August, a fruitless effort was made by the Governor to prevent a town meeting in Salem, called to choose delegates to meet in Convention at Ipswich, ‘to consider and determine on such measures as the late acts of Parliament, and our other grievances render necessary and expedient.’ A proclamation was issued, and troops ordered to be in readiness, who were prepared as if for battle, and eighty of them marched to within one-eight mile of the town house, but to no purpose. The people of Salem could not be prevented exercising their just rights either by threats or the exhibition of force. In fact, all the powers of government were apparently annihilated. There was not a judge, justice of the peace, or sheriff, who would venture to withstand the inflamed and determined people; and British bayonets had also lost both their terrors and their influence.”

When Gage arrested the seven members of local committee of correspondence who had called the meeting, around 3,000 colonists marched to the jail in protest. Gage ordered his soldiers not to confront the crowd and a judge quickly released the prisoners.

In defiance, the colonists held another town meeting in nearby Danvers and kept the meeting going two to three hours longer than usual just to see if Gage would intervene. Not wanting a repeat of what happened in Salem, Gage refused to get involved, stating “Damn ’em! I won’t do anything about it unless his Majesty sends me troops.”

The Massachusetts Committee of Safety and colonists themselves also began stockpiling weapons and ammunition for a much-anticipated war against the British government.

When General Gage learned of the colonist’s activities, he took measures to remove or lock up existing weapons and ammunition.

On September 1, 1774, after Gage removed the colonist’s black powder supply from a powder house in Somerville, thousands of men from outside of Boston found out about the powder alarm and marched into Cambridge to protest.

The protestors forced all the members of the royal appointees in Cambridge, two members of the mandamus counsel, the sheriff and the court clerks to either resign or apologize. They then moved on to the mansion of lieutenant governor where they forced him to resign as well, according to Bell:

“So this was the people outside of Boston being even more militant than the people inside Boston. By the end of that second day, September 2, 1774, it became clear that General Gage no longer had any authority outside of Boston, outside of places where he had troops, and he could not simply say ‘I am the royal governor, I am the representative of the King and Parliament and therefore this is what you should do.’ People were simply rejecting that outside of Boston.”

Almost immediately after the powder alarm in Somerville, cannons in the local forts and batteries began to disappear in what appeared to be a series of thefts on the part of the colonists.

Cannons from the battery in Charlestown went missing as did the great cannon in Dorchester. Shortly after, a confrontation took place between colonists and troops over the cannons in Boston’s north battery in the North End, according to Bell:

“So yes indeed, it was quite clear that the colonists, now that they were all riled up, were trying to grab as many cannons as they could and the British military was responding by trying to seize the weapons or put guards over them.”

In September of 1774, four small brass cannons stored in the gun houses in the center of Boston were placed under guard by General Gage to ensure colonists couldn’t steal them. Yet, despite the increased security, the cannons mysteriously went missing shortly after.

Furious that the cannons had been stolen from right under his nose, Gage began to look for the cannons all across Massachusetts. In February of 1775, he was informed by a loyalist that a number of cannons were being hidden in Salem.

The cannons in Salem were not the stolen Boston cannons and were instead 19 French cannons that Col. David Mason of Salem had purchased with his own money to help arm the local militia in the impending war with the British. Mason had the cannons mounted to carriages and hidden away in Captain Robert Foster’s blacksmith shop in Salem.

On February 26, 1775, Gage sent Lieut. Col. Alexander Leslie and the 240 soldiers in the 64th Regiment by ship to Marblehead and instructed them to march to Salem and seize the cannons and ammunition.

Finding nothing of particular in the town, the troops turned around and marched back to their ship in Marblehead.

In April of 1775, a loyalist spy, as well as two British officers and another spy named Benjamin Church, then informed Gage of cannons being hidden in Concord. Suspecting they were the stolen cannons from Boston, Gage ordered troops to march to Concord, according to Bell in the Ben Franklin’s World podcast interview:

“So General Gage had very good information that the four cannon from Boston were out in Concord in April of 1775. And on his first draft of instructions for the march out to Concord at the very top of the list of what the men should look for are the four brass cannon…the British went out to find these cannon.”

Shortly before Gage sent the troops out, he received word that the colonists had possibly smuggled the cannons out of Concord to surrounding towns.

Despite the fact that it might be too late to find the stolen cannon, Gage still decided to send the troops to Concord and it was during this expedition that the troops encountered armed militiamen and engaged in the Battles of Lexington and Concord, during which the Shot Heard Round the World was fired.

As the British troops retreated back to Boston, American militiamen continued to attack the troops the entire way, firing from behind rocks and trees along the route, and several skirmishes occurred in Concord, Lexington, Menatomy and Cambridge as a result.

When the British troops finally reached Boston, around 20,000 American militiamen blockaded the troops in the city in what is now known as the Siege of Boston.

The siege lasted for 11 long months, during which numerous skirmishes and battles took place, such as the Battle of Bunker Hill, but the siege eventually came to an end in March of 1776 after cannons from Fort Ticonderoga in New York were brought to Boston and used to fortify the hills surrounding the city.

When the British realized they were outgunned and outnumbered, they evacuated the city on March 17, 1776, thus bringing the Revolutionary War in Boston to an end.

According to the book Massachusetts in the American Revolution, out of the 37,363 soldiers enlisted in the Continental Army in 1775, about 16,449 were soldiers from Massachusetts.

In almost every year of the Revolutionary War, Massachusetts soldiers made up the majority of the soldiers in the Continental Army.

In addition, six of the 21 Major-Generals chosen to command the American armies were from Massachusetts as were 10 of the 49 Brigadier-Generals.

Numerous skirmishes and battles took place in Massachusetts during the early years of the Revolutionary War before the British left Boston in 1776:

2 thoughts on “Massachusetts in the American Revolution”