The Continental Army fought for the 13 colonies in the Revolutionary War.

The army served for the entire eight years of the Revolutionary War, from 1775-1783, in North America as well as in the West Indies.

The following are some facts about the Continental Army:

Why Was the Continental Army Formed?

When the American Revolution first began, the colonists didn’t have an army and instead relied on militias in each colony or raised temporary regiments during specific crises such as the French and Indian War in 1754.

The local militias were not as experienced or as well-trained as the professional British Army and it quickly became apparent to the colonists that they needed their own unified army if they were to defeat the British and their German allies. 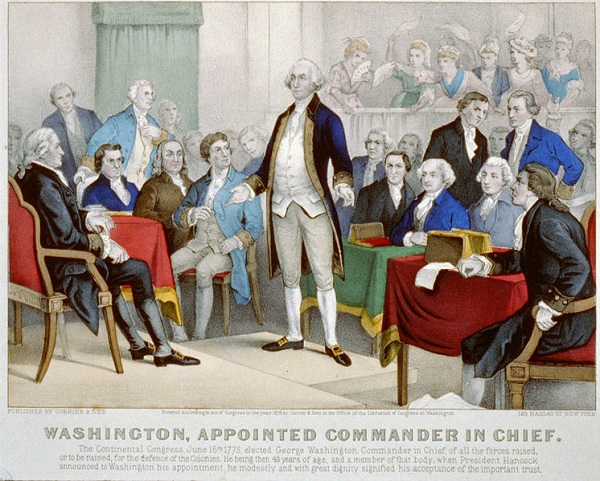 George Washington accepting command of the Continental Army, lithograph by Currier & Ives, circa 1876

On June 15, 1775, Congress appointed George Washington, who was a veteran of the French and Indian War, as the Commander-in-Chief of the new army.

How Was the Continental Army Structured?

This first establishment of the Continental Army, from 1775-1776, consisted of 10 companies of riflemen from Pennsylvania, Maryland and Virginia who served a one-year enlistment.

In addition to the 10 new companies, Congress also adopted the existing 22,000 troops that had already been raised by the colonies of New Hampshire, Massachusetts, Rhode Island and Connecticut and were stationed outside Boston in the Siege of Boston.

These troops were organized into 39 regiments of infantry, one regiment of artillery and one separate company of artillery.

Each regiment had a total of eight companies and 728 soldiers who were commanded by a colonel, a lieutenant colonel and a major.

Each company had a total of 90 soldiers who were commanded by a captain as well as lieutenants, ensigns, or cornets.

The Continental Army was also supplemented by local militias and troops that remained under the control of individual states.

When the one-year enlistment for the soldiers was up in 1776, the Continental Congress had to re-raise the army. This second establishment of the Continental Army, from 1776-1777, consisted of 27 regiments with eight companies in each regiment.

Towards the end of 1776, when the British army began deploying huge forces of German soldiers to supplement their ranks, the Continental Army found itself in desperate need of more soldiers.

As a result, in December of 1776, the Continental Congress voted to dramatically increase the number of regiments in the army to about 120 and required soldiers to enlist for the duration of the war (or at least three years.)

This resulted in the third establishment of the Continental Army, from 1777-1784, which consisted of 119 regiments with nine companies in each regiment.

Each state provided pay, food, shelter, clothing, arms, and other equipment for each of their state regiments. Each state also had a quota, based on their population size, for the number of soldiers they were required to raise. 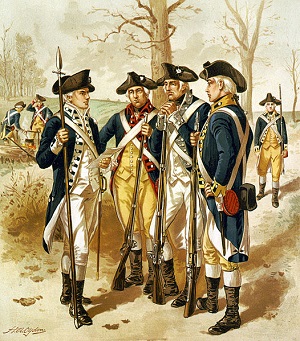 Uniforms and weapons of the Continental Army, lithograph by Henry Alexander Ogden

What Advantages Did the Continental Army Have?

The Continental Army had a number of advantages over the British army. Their biggest advantage was that they were fighting for a grand cause, their independence and freedom, which was a very motivating factor.

In addition to this, the colonists also had a militia that was highly skilled in guerrilla-style warfare, which the British were unaccustomed to, and the Continental Army was also fighting on its home turf so it knew the land, shortcuts, problems areas and places to hide.

Although most of the soldiers were inexperienced, the army fortunately had the leadership skills of George Washington to guide them. Washington was a veteran of the French and Indian War and was considered a very skilled and talented military leader.

Later in the war, a number of different countries, first France and then Spain and the Dutch Republic, joined the war as allies of the United States or allies of France and provided badly needed funds, troops and supplies.

What Disadvantages Did the Continental Army Face?

The Continental Army also faced many disadvantages, such as a constant shortage of money, weapons, gun powder, food, clothing and medicine.

Although the British army had the British government and the Crown to fund them, the Americans had no such source of wealth to draw from in the early days of the war and were always short on money.

In the first few years of the war, the colonies had no allies to help them and had to supplement their small army with local militia regiments.

Also, the majority of the soldiers in the Continental Army were mostly farmers and had very little to no experience on the battlefield. This was a major disadvantage against the British army who were some of the most skilled and experienced soldiers in the world.

The Continental soldiers also sometimes had to fight their neighbors and fellow countrymen when they joined the loyalist regiments in the British army.

What Was the Continental Army’s Strategy?

Many historians believe the American’s strategy in the Revolutionary War was the Fabian strategy which was to wear the British army down by avoiding decisive battles and dragging the war out for as long as possible.

These historians argue that the Continental Army knew they were up against one of the most powerful armies in the world so instead of trying to win, the Americans simply tried not to lose for as long as possible in the hopes that the British would tire of the war and give up. 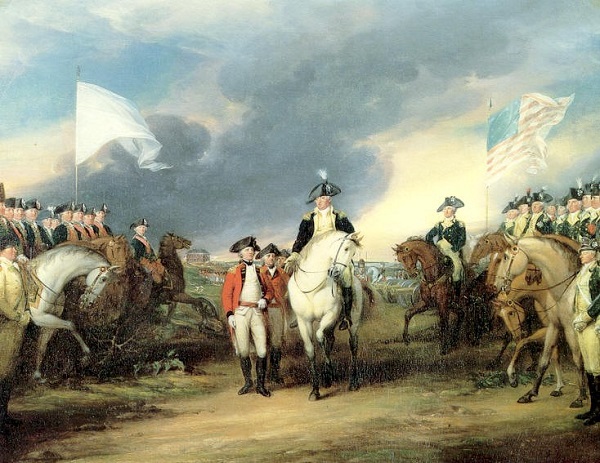 “Surrender of Cornwallis at Yorktown” by John Trumball circa 1819-20. Painting depicting the British surrendering to French and American troops in Yorktown.

Yet, many other historians believe the Americans had no real strategy in place and were just trying to survive. These historians argue that this lack of focus resulted in numerous military losses and a needlessly prolonged war.

Weapons Used by the Continental Army:

The Continental army used a variety of weapons which includes:

Additional Regiments:
The Continental Army also had many unnumbered infantry regiments. They were raised “at large” and were not a part of any state’s quota.

Partisan Corps units of mounted and infantry troops that were mainly intended to engage in guerrilla warfare.

Invalid Corps:
The Corps of Invalids was a separate branch of the Continental Army that consisted of veterans who were unfit for duty but could still serve as guards for magazines, hospitals and etc.

2 thoughts on “The Continental Army in the Revolutionary War”