The 13 colonies were one of the many nations who fought in the Revolutionary War in the late 18th century.

The 13 colonies during the Revolutionary War-era were:

The 13 Colonies Before the Revolutionary War:

Three types of governments existed in the colonies prior to the American Revolution: royal, charter and proprietary.

Charter colonies were granted to businesses. The business owner created the laws but they were required to base their laws on English law at the time. The charter colonies were: Connecticut, Massachusetts Bay Colony and Rhode Island. 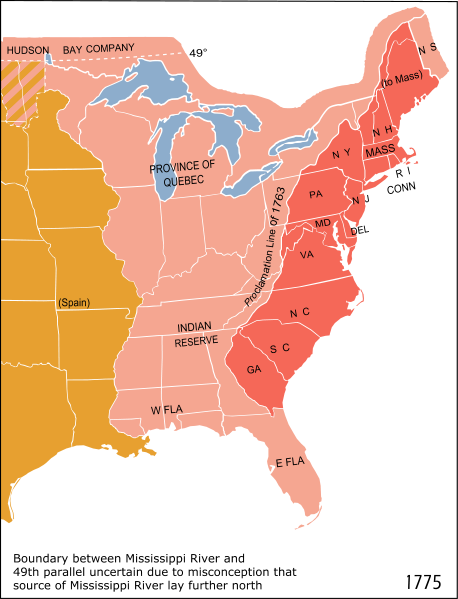 The original charter colonies of Massachusetts, Connecticut and Rhode Island eventually had their charters revoked in the 17th century and were taken over by the British government upon which they became royal colonies with royal governments, much to the colonist’s dismay.

Yet, despite the fact that many of the colonies were royal colonies, for a period of time prior to the American Revolution, the thirteen colonies had been allowed to self-govern.

This was due to what is now known as the policy of Salutary Neglect, which was based on the premise that if the colonies were left alone, they would flourish and Great Britain would reap the benefits in increased trade, tax revenue and profits.

It was during this period of salutary neglect that the colonies learned to self-govern which helped the colonists develop their sense of independence and self-sufficiency.

The policy of Salutary Neglect was in place for many decades, from the early to mid 1700s, until the end of the French and Indian War when the British government found itself in desperate need of funds to pay off the war debt and to cover the cost of the large number of troops it had sent to North America to protect the new land it had won.

The 13 Colonies During the Revolutionary War:

The American Revolution began after Great Britain passed a series of new taxes designed to generate revenue from the colonies in 1763 to help pay off its war debt.

The new taxes were met with a lot of resistance from the colonists because they felt the government didn’t have the right to tax them if they didn’t have representation in Parliament and feared that the new laws were just the beginning of even more infringements on their rights.

The colonists boycotted, protested and even rioted over the new laws. The British government responded to the rebellion by sending British troops to the colonies to restore order and enforce the new laws but the increased military presence only escalated the conflict.

The conflict came to a head in April of 1775 when British troops searching for the colonist’s hidden ammunition supplies engaged with American militia in the first battles of the Revolutionary War in Lexington and Concord.

In response to the battles, the colonists formed the Continental Army in June of 1775 to help them fight the British army.

Then, on July 5, 1775, the Continental Congress adopted a surprising piece of legislature known as the Olive Branch Petition, which was a last ditch effort to avoid going to war with Great Britain.

The petition was the work of the more moderate members of Congress, who actually opposed the war, and its purpose was to appease King George III and prevent the conflict from escalating into a full blown war.

Yet, before the petition even reached England, King George III had already issued the Proclamation of Rebellion, on August 2, 1775, which declared that the colonies were in an “open and avowed rebellion” and ordered officials of the British Empire to suppress the rebellion.

When the petition did reach the king later that month, he refused to read it and immediately rejected it.

On October 27, 1775, King George spoke at Parliament and stated that he intended to deal with the colonial rebellion with armed force and asked for assistance from foreign governments.

The proclamation and the King’s vow to fight the rebellion with armed forces destroyed any hope of avoiding an all out war and made it clear that the king was not interested in finding a way to resolve the dispute peacefully. 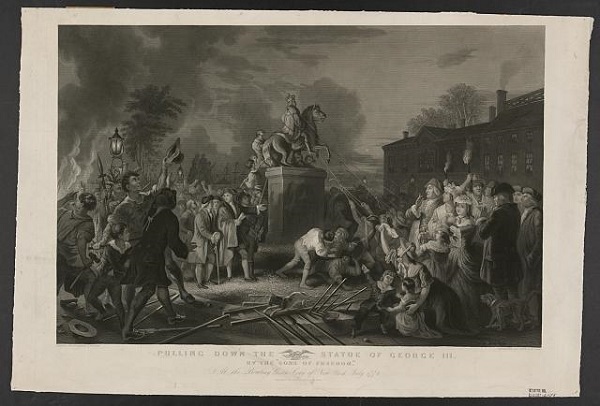 A scene depicting colonists pulling down the statue of George III in New York in July of 1776, engraving by John C. McRae, circa 1875

On July 4, 1776, the 13 colonies declared their independence from Great Britain. This declaration finally allowed for the United States to be officially recognized by friendly foreign governments, such as France, who refused to consider the possibility of an alliance without it.

On September 9, 1776, the Continental Congress officially changed the name of the 13 colonies from the “United Colonies” to the “United States of America.” 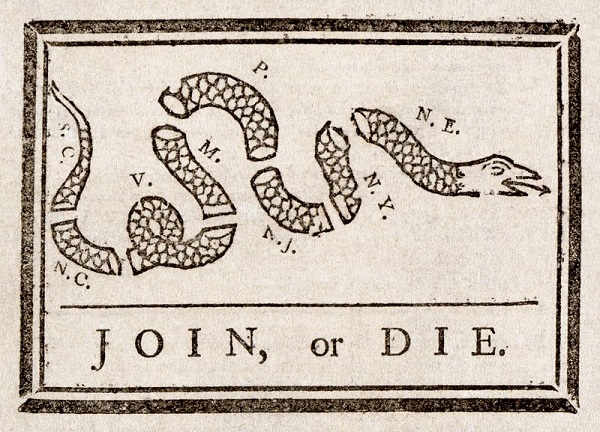 Join or Die, political cartoon about the need for colonial unity during the French and Indian War, by Benjamin Franklin, circa 1754. Each section of the snake represents each region of the North American colonies. The cartoon was later re-purposed during the Revolutionary War to unite the colonies against Britain.

As the war waged on, the American economy began to suffer due to a decline in the trade industry brought about by the British blockade of the American ports.

The colonies had to rely on European loans to help pay for the war effort. France, Spain and the Netherlands lent the United States over 10 million dollars.

Because the Continental Congress didn’t have the authority to tax colonists, it printed paper money at a rapid pace to help pay for the war effort. As a result, the colonies experienced severe inflation and depreciation of the Continental dollar.

On November 15, 1777, the Continental Congress adopted the Articles of Confederation, the first constitution of the United States, but the states did not ratify them until March 1, 1781.

The war shifted to the southern colonies after 1778 and eventually spread across the world, to India, the West Indies and Europe, as the various countries joined the war effort.

In February of 1782, after a long and costly war, Parliament voted to concede American independence.

This started two years of peace talks between Great Britain and the United States which resulted in the Treaty of Paris of 1783.

The 13 Colonies After the Revolutionary War:

The fledgling United States was in a chaotic state after the Revolutionary War. The period after the war was characterized by economic depression and political crisis.

The thirteen states at the time were ruled by a Confederation Government that was only unified by the Articles of Confederation. Each state remained sovereign and could govern its own way.
Congress didn’t have any power to tax or regulate trade and there were no executive or judicial branches in the government to enforce laws.

As a result, the government couldn’t generate revenue to pay its massive war debts.
Without a strong central government to regulate trade, trade between the states suffered due to restrictive state tariffs and commercial regulations.

Furthermore, an unfavorable trade balance with foreign countries was draining hard money out of the United States.

In response, several states began issuing paper money which added to the enormous amount of paper money printed during the war and essentially made it lose its value. 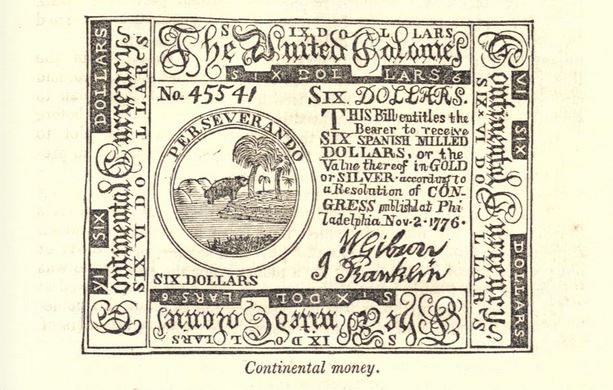 Continental money, illustration published in A Pictorial History of the United States, circa 1857

The expanding currency and depreciation immediately resulted in a corresponding rise in prices which further contributed to the deteriorating economy.

In response to the economic and political crisis of the 1780s, the need for political reform and a stronger Federal government soon grew.

On February 22, 1786, Congress approved a plan to hold the Constitutional Convention in Philadelphia in 1787 in order to revise the Articles of Confederation.

On March 4, 1789, the current United States Constitution replaced the Articles of Confederation.
The Constitution gave the government the power to tax, which greatly improved the government’s finances, and also prohibited states from issuing paper money, which also improved capital markets.

This newly strengthened central government affected the economy in small but significant ways, according to an article, titled Economic Interests and the Adoption of the United States Constitution, on EH.net:

“Walton and Shepherd conclude that the most important changes associated with the Constitution ‘were those changes that strengthened the framework for protection of private property and enforcement of contracts’ (pp. 187-88). These changes were most important because they increased the benefits of exchange (the cornerstone of a market economy) and created incentives for individuals to specialize in economic activities in which they had a particular advantage and then engage in mutually advantageous exchange (trade) with individuals specializing in other economic activities. Specific provisions in the Constitution that helped to increase the benefits of exchange were those that prohibited the national and state governments from enacting ex-post-facto laws (retroactive laws) and a provision that prohibited the state governments from passing any ‘law impairing the obligation of contracts.’ These prohibitions were important to the development of a market economy because they constrained governments from interfering in economic exchange, making the returns to economic activity more secure.”

Since the economies of the thirteen states weren’t highly interconnected in the 1780s, the immediate effect of the Constitution was small.

Yet, the creation of the Constitution was still significant because it eventually became the foundation of the national government.

It took nearly twenty years before the American economy turned around, but when it did, it flourished. The United States became a world power sometime in the 1870s or 1880s when its economy became the largest economy in the world.

Yet, the rest of the world didn’t see the United States as a super power until 1898 when the United States defeated Spain in the Spanish-American war and took various Spanish colonies such as Cuba, Philippines, Guam and Puerto Rico.

After WWII, the British Empire was dismantled and the United States and the USSR were only superpowers left.

After the collapse of the Soviet Union in 1991, Russia lost its super power status and the United States has since remained the sole global super power.

3 thoughts on “The 13 Colonies in the Revolutionary War”