The French and Indian War was a war between Great Britain and France over control of the Ohio River Valley during the mid 18th century.

The French and Indian War, which took place between 1754-1763, later became a global war when it spread to Europe in 1756, which resulted in the Seven Years War.

The following is a timeline of events of the French and Indian War:

1689-97:
♦ The War of the League of Augsburg, known in North America as King William’s War, takes place and is considered the first of the French and Indian Wars.

1702-13:
♦ War of the Spanish Succession, known in North America as Queen Anne’s War, takes place and is considered the second of the French and Indian Wars.

1713:
♦ On April 11, 1713, Treaty of Utrecht is signed which brings the War of Spanish Succession to an end.
♦ On September 2, 1713, the French claim the land where they will build the town of Louisbourg and the Fortress of Louisbourg in Nova Scotia. 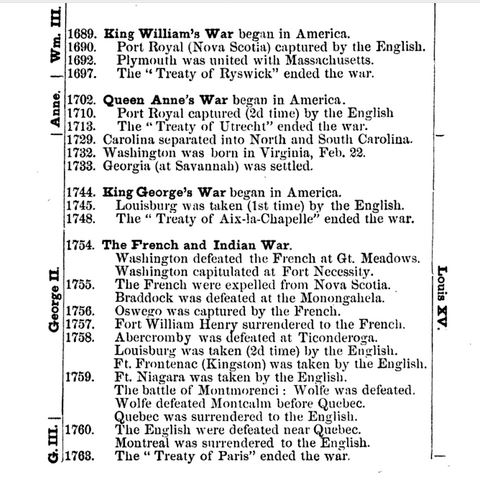 Chronological Summary of the French and Indian Wars, published in A Pictorial School History of the United States, circa 1877

1739-1748:
♦ The War of Jenkins’ Ear, which later merged into the War of the Austrian Succession, takes place.

1744-48:
♦ The War of the Austrian Succession, known in North America as King George’s War, takes place and is considered the third of the French and Indian Wars.

1749:
♦ On May 19, 1749, King George II of England grants the Ohio Company a charter of several hundred thousand acres of land around the forks of the Ohio River.
♦ On June 21, 1749, the British establish the city of Halifax in Nova Scotia.
♦ Celeron de Bienville’s expedition into the Ohio River Valley takes place in the summer.

1752:
♦ On June 21, 1752, the French and their Indian allies attack the town of Pickawillany in Ohio and its inhabitants, taking five British traders prisoner and killing Piankashaw chieftain La Demoiselle, aka Memeskia.
♦ In July of 1752, Michel-Ange Duquesne de Menneville arrives as governor of New France.

1753:
♦ In December of 1753, Major George Washington arrives at Fort LeBoeuf in Pennsylvania and delivers an ultimatum to French Captain Legardeau de Saint-Pierre to abandon the fort and leave the Ohio River Valley. He rejects it.
♦ On December 16, 1753 Washington leaves Fort LeBoeuf with St. Pierre’s response.

1754:
♦ Major George Washington and 160 soldiers from the Virginia Regiment are sent to reinforce Fort Prince George near modern day Pittsburg, Ohio.
♦ On April 16, 1754, Fort Prince George is seized by French soldiers, before Washington can reach it, and is renamed Fort Duquesne.
♦ On May 28, 1754, the Battle of Jumonville Glen, which is the opening battle of the war, takes place near present-day Hopwood, Pennsylvania. French-Canadian commander Joseph Coulon de Jumonville is killed during the battle.
♦ On June 3, 1754, Washington and his troops complete Fort Necessity, at Great Meadows, to defend themselves against French troops enraged by Jumonville’s death.
♦ On June 19, 1754, the Albany Congress begins in Albany, New York.
♦ On July 3, 1754, the Battle of Fort Necessity takes place near present-day Farmington, Pennsylvania.
♦ On July 4, 1754, Washington surrenders Fort Necessity after losing nearly a third of his troops.
♦ In October of 1754, Washington resigns his Virginia command and returns to civilian life.

1766:
♦ On July 25, 1766, Pontiac and the Algonkian chiefs meet at Fort Ontario in New York to sign a final peace treaty, which brings Pontiac’s War to an end.