The industrial revolution completely transformed Massachusetts in the 19th century. It changed the economy, society, transportation, health and medicine and led to many inventions and firsts in Massachusetts history.

The industrial revolution began in England and eventually spread to the rest of the world, but came late to the United States, finally arriving in the late 1700s and early 1800s.

The following is a list of ways industrialization impacted Massachusetts; 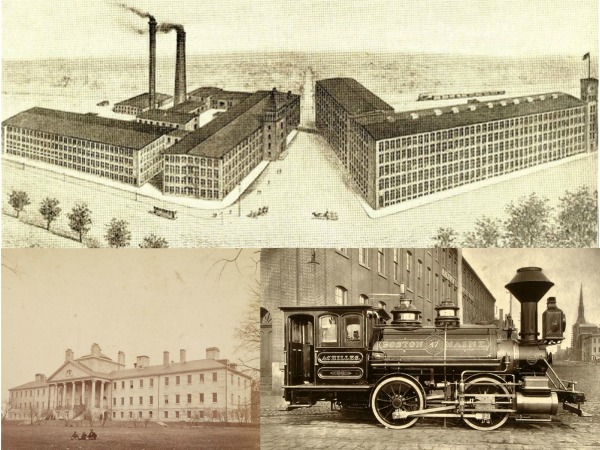 Before the industrial revolution, Massachusetts’ economy was based primarily on agriculture, fishing and maritime shipping.

American manufacturers feared that if England continued to monopolize manufacturing and trade, America would be dependent on English imports forever and its economy would suffer, according to book the The Life and Times of Francis Cabot Lowell by Chaim M.Rosenberg:

“America in 1794 was stuck in the age of craftmanship such as homespun, while British manufacturing was transformed by the industrial revolution. Great Britain kept its lead by refusing ‘to sell any of her new machines, and prohibiting the exportation of parts, plans, or skilled artisans.’ From these observations, Henry Wansey [a British clothier and antiquary who visited American in 1794] concluded that ‘the ability of the United States to manufacture cannot keep pace, by any means, with her increasing population; at least for a century. It therefore follows, that she must increase in her demand for foreign manufactures, and the Americans generally acknowledge that no country can supply them as well as Great Britain. For the year 1792, Great Britain sold goods to the United States worth $15,285,428, while the United States sold goods to Great Britain for $9,363,416. With her growing population and an economy based on farming, Wansey foresaw America’s dependence on Great Britain for manufactured goods to continue for many years to come.”

When the Embargo Act of 1807 cut off imports from Britain, this forced Americans to increase the amount of goods they manufactured. By 1810, the U.S. had built about 50 cotton-yarn mills.

When the War of 1812 broke out, British ships blockaded the Massachusetts coast, completely cutting them off from the sea. This forced the state to not only find other ways to make money but also to supply their own needs, particularly cloth.

As a result, this sped up the process of industrialization in Massachusetts and textile manufacturing quickly went from being a cottage industry, where work was performed on a small scale at home, to a large scale factory system.

Textiles mills in Massachusetts played a pivotal role in the industrialization of the United States. Textile mills were the first manufacturers to use modern production methods during the Industrial Revolution and thus textiles became the dominant industry during this time period.

Lowell, who was born in Newburyport, Mass, in 1775, was a successful merchant who visited England in 1810, at the age of 36, and was so impressed by the British textile mills that it inspired him to start his own mills.

In 1813, Lowell and several partners formed the Boston Manufacturing Company and introduced a power loom, based on the British model, that had been tweaked with many technological improvements.

The company built a large brick mill next to the Charles River in Waltham, Massachusetts that incorporated various technologies to convert raw cotton into cloth. The mill integrated the chain of tasks under one roof, known as the Lowell System. This system was later adopted across the country and became the basis of the American manufacturing system.

Lowell died of an illness in 1817 and left his company to his investors. Dividends were paid out and, in 1822, the investors started a new, and much larger, mill town, which they named Lowell in honor of their leader.

Lowell, Massachusetts is known as “the cradle of the American Industrial Revolution” since it was the first large scale factory town in the country.​

The company was so successful that it continued to expand into other New England towns such as Chicopee, Mass, Lawrence, Mass and Manchester, NH.

By the 1850s, the Boston Manufacturing Company, which was by then renamed the Boston Associates, was responsible for a fifth of America’s cotton production.

According to the National Park Service website, the associates’ financial success built a political, economic and social empire that greatly benefited Massachusetts and continued to promote industrialization in the state:

“Their profits permitted this tight-knit group of families – Appletons, Cabots, Lowells, Lawrences, Jacksons – to build an economic, social, and political empire. They helped develop the Boston and Lowell Railroad and other railroad lines in New England. They owned controlling stock in a host of Boston financial institutions, allowing them to finance and insure ventures through their own companies. As their fortunes grew, the Boston Associates turned to philanthropy establishing hospitals and schools and to politics, playing a prominent role in the Whig Party in Massachusetts. Until the Civil War, the Boston Associates were New England’s dominant capitalists.”

The industrial revolution brought many advances in medicine and hospitals during this time period. As a result, new hospitals were established, such as the Massachusetts General Hospital, which was built in Boston in 1811. It was one of only three general hospitals in the United States at the time.

According to the book A Short Medical History, hospitals and hospital medicine were basically a product of the 19th century due to overcrowding in cities, both in Europe and the United States, which caused an increase in disease:

“In the Middle Ages medicine had centered round libraries. During the following three centuries, as in classical antiquity, it had focused upon the individual sickbed. But in the nineteenth century it centered round hospitals. Hospitals were such a decisive factor in the development of early nineteenth-century medicine that this particular period might well be categorized as the period of hospital medicine, as distinguished from its predecessors, library and bedside medicine, and its successor, which can aptly be called laboratory medicine. Hospitals had existed before, but their number increased prodigiously as the Industrial Revolution fostered rapid urbanization. Refuge had to be found for the tens of thousands of young peasants, male and female, who were streaming into the growing cities. All too often they fell victims to typhoid fever or tuberculosis, disease which as a result are found to be in the center of the clinical interests of the period. The new arrivals, having neither homes nor families to take care of them, became hospital patients.”

Many medical firsts and discoveries were made in Massachusetts, such as the discovery of ether. These discoveries and advances changed people’s lives and dramatically improved health care in the 19th century.

“Until the 19th century, people with mental illness were cared for by family members, who quietly attended to their needs in rural areas. But with the dawn of the Industrial Age, and its accompanying growth of crowded cities, many people feared people with mental illness were a threat to public safety. That perceived threat provided the impetus for the creation of asylums to confine psychiatric patients. Consequently, by the second half of the century, many states had opened public psychiatric asylums. These sanctuaries ultimately became the hospitals for the poor, since the better-off patients could take refuge in the private philanthropic asylums, such as McLean Hospital in Massachusetts, which required patients to pay their own way.”

The industrial revolution also sparked the transportation revolution during which the construction of roads, bridges, railroads and canals helped people move around more freely, increased trade, and forever altered the physical landscape of Massachusetts with massive public works projects, such as the Boston Landfill project.

The first railroad in America, the Granite Railway (which later became the Old Colony and Newport Railway), was built in Massachusetts in 1826 and many more were built over the course of the 19th century.

With this increased transportation came a demand for more accommodations for travelers. Many of the now historic hotels in Boston where built during this time period as a result.

This increased movement and trade further helped transform the economy of the United States from an agricultural economy to a manufacturing economy, according to the book The Transportation Revolution, 1815-1860:

“From the ‘cutting edge’ frontier, which already reached far into the Ohio River Valley, to the outskirts of its seaboard cities the United States was in 1815 chiefly an agricultural country. Commerce, largely sea-and-river-borne, was organized and directed by the merchant capitalists residing in a few cities along the Atlantic coast. This American economy of the nineteenth century might best be described as extractive-commercial in character. It is true that the beginnings of industrial growth were already discernible. But in this land of continental expanses only revolutionary developments in the techniques of transportation and communication would make possible that almost explosive rush of industrial expansion which characterized the later decades of the century.”

In the second phase of the industrial revolution, the Boston Subway, which was the first subway in America, was built using the same technology.

Many notable inventions took place in Massachusetts, particularly during the Industrial Revolution.

The machines, tools, equipment and greater scientific knowledge in the 19th century allowed for more experiments which led to new discoveries and inventions.

Some such Massachusetts inventions were the telephone, vulcanized rubber and the game of basketball.

To learn more about the industrial revolution, check out this article on the Best Books About the Industrial Revolution.

3 thoughts on “Massachusetts in the Industrial Revolution”