John Billington was a Mayflower pilgrim, and a signer of the Mayflower Compact, who became America’s first murderer after he shot and killed a fellow colonist in 1630.

According to the book The Human Tradition in the Atlantic World, the Billingtons were poor and faced limited prospects in overpopulated England.

In the summer of 1620, business men from London began recruiting families and individuals to help colonize northern Virginia. Billington decided to take the men up on their offer. The only catch was that the passage to America came with a price:

“In exchange for their passage, shipboard provisions, and a share of the profits, Billington signed a contract that bound himself, his wife, and their two sons to labor on behalf of the colony until 1627. For the duration of their partnership with the investors, the Billingtons and their fellow colonists would work six days per week for ‘the Company.’ All profits from ‘trade, traffic, trucking, working, fishing, or any other means’ would remain in the common stock; even the houses and gardens ere to be included in the assets to be divided after seven years. Some people considered the terms ‘fitter for thieves and bond slaves than honest men,’ but the prospect of a better life was sufficient inducement for the Billingtons to cast their lot with other hard-pressed families headed for America.”

When the Billington family boarded the Mayflower in the late summer of 1620, they discovered their fellow travelers were a large group of religious Separatists from Holland. The Billingtons were devoted members of the Church of England and realized they had nothing in common with these religious dissenters.

Little did they know that when the organizers of the trip, a Separatist church exiled in Holland led by John Robinson, tried to originally recruit church members for the trip most of them were reluctant to join due to the harsh contract terms, the danger of crossing the ocean and the untamed wilderness of America.

When the recruiters failed to find 150 volunteers among its church members, they began to recruit non-Separatists like John Billington in order to secure enough volunteers.

According to the book American Murder, Billington and his family began causing problems while aboard the Mayflower:

“Billington, his wife Ellen, and their sons Francis and John the younger were aboard when the Mayflower dropped anchor at Provincetown harbor. Straightaway, the Billingtons started causing trouble. Even before the newly arrived immigrants could move on to Plymouth Rock, Francis almost sank the ship when he fired a gun near an uncovered barrel of gunpowder and set fire to a cabin.”

Billington and some of the other non-Separatists also started to cause trouble when the ship landed in New England, where they did not have a patent to settle.

According to Governor William Bradford’s journal, Of Plymouth Plantation, the non-Separatists began to utter “discontented and mutinous speeches” and insisted “when they came ashore they would use their own liberty; for none had power to command them, the patent they had being for Virginia, and not for New England, which belonged to another government.”

The author of The Human Tradition in the Atlantic World states that these protests came from colonists like Billington who were eager to walk away from the strict contract they signed and wanted to avoid living in a society dominated by anti-Anglican religious separatists.

Despite signing the Mayflower Compact, which was a social contract the colonists signed in early November in which they promised to obey the colony’s laws, Billington continued to cause problems in the colony. In March of 1620, Billington insulted the colony’s military adviser, Miles Standish, when he challenged his authority and was sentenced to public humiliation by having his neck and feet tied together.

In 1623, the colonists divided the available land and John Billington was awarded three acres. Technically, he should have received four acres, one for every member of his family, but it appears that his son, John, was living with Richard Warren at the time and, as a result, Billington only received three acres while Warren received one extra acre.

In 1624, Billington got into trouble again after he was accused of secretly supporting local dissenters who had been sending political letters meant to undermine the colony back to England. Billington insisted he was innocent and since there was no proof that he was actually involved in the conspiracy, the colonists could do little about it. 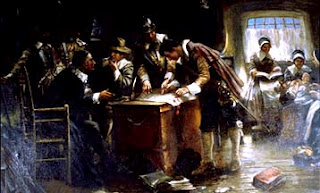 In 1625, it appears Billington became involved in a quarrel with a man named Robert Cushman, for reasons unknown to the colonists. Bradford wrote a letter to Cushman in June of that year stating: “Billington still rails against you, and threatens to arrest you, I know not wherefore, he is a knave, and so will live and die.”

In 1626, the colonists assumed full ownership of the plantation after a period of negotiation with the investors who were disgruntled because they had received very little profit from the project. The land and cattle were divided up among them but for Billington, it wasn’t quite what he was expecting.

Billington received the smallest per capita allotment in the colony, despite the fact that he was one of the first settlers of the colony. He received a house in the center of Plymouth, 63 acres of land, a share in the plantation’s livestock and rights in future distribution.

Billington didn’t have much of a social status in the colony either. He was not a member of the church, he had been excluded from all public office due to his bad reputation with Governor Bradford and he lacked the resources necessary to become one of the colony’s Undertakers, which were men who took on financial liability for the colony and controlled its trade with England. As a result of all this, Billington was frustrated and angry.

To make matters worse, sometime between 1627 and 1630, Billington’s son, John, died just before he turned 25 years old. The cause of death is unknown but Richard Warren also died in 1628 which indicates there may have been an illness in the Warren household.

Around the same time, Billington became involved in a dispute with his neighbor John Newcomen. It is not known what the dispute was about but the after effects lingered until 1630 when Billington happened upon Newcomen in a field and shot him dead, according to William Hubbard’s book A General History of New England:

“So when this wilderness began first to be peopled by the English where there was but one poor town, another Cain was found therein, who maliciously slew his neighbor in the field, as he accidentally met him, as he himself was going to shoot deer. The poor fellow perceiving the intent of this Billington, his mortal enemy, sheltered himself behind trees as well as he could for a while; but the other, not being so ill a marksman as to miss his aim, made a shot at them, and struck him on the shoulder, with which he died soon after. The murtherer expected that either for want of power to execute for capital offenses, or for want of people to increase the plantation, he should have his life spared; but justice otherwise determined.”

According to the book The Human Tradition in the Atlantic World, the murder was the result of Billington’s frustration after years of struggling to prosper in the colony. The book states that after the death of his son, Billington was angry about his bad fortune and was frustrated about a new wave of incoming colonists that would only increase their hardships:

“Not long after that personal tragedy, John Billington learned that Plymouth would soon receive a new wave of impoverished Separatists from Holland. Not only would there be additional competition for arable pasture land and timber, but the established colonists would be expected to support these newcomers for up to eighteen months until they could become self-sufficient. The burden fell heavy on the plantation and exacerbated tensions that simmer just below the surface. Men like Billington were powerless to stem the tide of dissenters from Leiden. His land holdings were modest, his options were limited, his oldest son was dead, and just as he was starting to reap the benefits of his long labors, the colony was saddled with indigent Calvinists who years earlier had shunned the hazards of initial settlement. To add insult to injury, servants began to arrive from England to work for the colony’s privileged undertakers. After years of strife and frustration, John Billington reached a breaking point. As the decade drew to a close, his frustration and anger got the best of him, and he ‘waylaid a young man, one John Newcomen, about a former quarrel and shot him.’”

Massachusetts Governor William Bradford wrote an account of Billington’s trial and hanging in his journal Of Plymouth Plantation, and stated that he sought the advice of the nearby Massachusetts Bay Colony on the matter:

“This year John Billington the elder (one that came over with the first) was arraigned; and both by grand, and petty jury found guilty of willful murder; by plain and notorious evidence. And was for the same accordingly executed. This as it was the first execution amongst them, so was it a matter of great sadness unto them; they used all due means about his trial, and took the advice of Mr. Winthrop, and other the ablest gentlemen in the Bay of Massachusetts, that were then newly come over, who concurred with them that he ought to die, and the land be purged from blood. He and some of his, had been often punished for miscarriages before, being one of the profanest families amongst them.”

John Billington was hanged in September of 1630. Billington’s burial location is unknown, although he was probably buried on his property as per social custom at the time.

The Billington family continued to get into trouble even after John Billington’s death. On June 7, 1636, Elinor was found guilty of slandering a man named John Doane, a church deacon and former assistant governor. She was sentenced to sit in the stocks, be whipped and pay a £5 fine. In 1638, she remarried to a man named Gregory Armstrong and died sometime between 1643 and 1650.

Francis Billington married Christian Eaton in July of 1634. He received a few small fines in the 1630s and 40s for minor offenses but for the most part stayed out of trouble. He and Christian had nine children and lived in Plymouth until 1669 when they moved to Middleboro. They both died of old age in 1684.