Mercy Lewis was one of the afflicted girls of the Salem Witch Trials and a servant in Thomas Putnam’s home.

Lewis, the daughter of Phillip Lewis, was born in Falmouth, Maine in 1675. On August 11, 1676, one-year-old Mercy Lewis and her parents barely escaped an attack by the nearby Wabanaki Indians that resulted in the death of her grandparents, cousins and many other members of the community.

Seeking refuge, the Lewis family fled to an island in Casco Bay along with the other surviving members of the community, including Reverend George Burroughs.

After the attack, the Lewis family moved briefly to Salem, Ma where Lewis’ uncle, Thomas Skilling, died a few months later, possibly from a wound he suffered during the attack. Mercy Lewis and her family then moved back to Casco Bay in 1683.

In the summer or fall of 1689, the Wabanaki attacked again, this time killing both of Mercy Lewis’ parents.

After their deaths, Lewis was briefly sent to work as a servant in Reverend George Burroughs home. She later moved to Salem village, where her married sister lived, and became a servant for Thomas Putnam, who is considered to be one of the ringleaders of the Salem Witch Trials accusers.

It was in Thomas Putnam’s home that the nineteen-year-old Lewis befriended Ann Putnam, Jr. When Putnam began behaving strangely in the winter of 1692, suffering fits and seizures, Lewis quickly followed suit.

By the end of February, a local doctor determined the girls were bewitched. A few days later, Putnam and her cousin, Abigail Williams, began naming women they believed were bewitching them.

Lewis didn’t immediately join the afflicted girls in naming witches. She didn’t officially accuse anyone of witchcraft until she named Elizabeth Proctor on March 26. Proctor wasn’t arrested until the first week of April after Elizabeth Hubbard accused her as well.

Mercy Lewis and the other afflicted girls also turned on one of their own, Mary Warren, on April 18th after she hinted that the girls may have been lying about their afflictions.

During Elizabeth Proctor’s trial, the girls accused Warren of helping Proctor’s spirit torment them and Warren soon found herself in jail.

Shortly after, Lewis almost suffered the same fate during Deliverance Hobbs examination on April 22, when Hobbs claimed the spirits of Sarah Wilds and Mercy Lewis tormented her:

Fortunately for Lewis, the examination continued without any further mention of her and she was never accused.

According to court records, Lewis accused a total of nine people of witchcraft and officially testified in 16 cases during the course of the Salem Witch Trials (she was also indirectly involved in other cases, such as the trials of Rebecca Nurse and Mary Easty):

Lewis was particularly instrumental in the accusations of several people she knew from Falmouth, Maine, such as Reverend George Burroughs, Captain John Alden, Jr., and Abigail Hobbs. Since she was one of the only people in Salem who knew anything about their backgrounds, she was the main source of information about them.

Although it is not clear why Lewis accused and testified against Reverend George Burroughs, it was most likely an attempt to get revenge against a former employer. In Lewis’ testimony against Burroughs, she told stories about her time living with him in Maine:

“The deposition of Mercy Lewes who testifieth and saith that one the 7’th of may 1692 at evening I saw the apparition of Mr. George Burroughs whom i very well knew which did grievously torture me and urged me to write in his book and then he brought to me a new fashion book which he did not use to bring and told me I might write in that book: for that was a book that was in his study when I lived with them: but I told him I did not believe him for I had been often in his study but I never saw that book their: but he told me that he had several books in his study which I never saw in his study and he could raise the devil: and now had bewitched Mr. Sheppard’s daughter and I asked him how he could go to be witch here now he was kept at Salem: and he told me that the devil was his servant and he sent him in his shape to do it then he again tortured me most dreadfully and threatened to kill me for he said I should not witness against him also he told me that he had made Abigail Hobbs: a witch and several more then again he did most dreadfully torture me as if he would have racked me all to peaces and urged me to write in his book or else he would kill me but I told him I hoped my life was not in the power of his hand and that I would not write tho he did kill me: the next night he told me I should not see his two wives if he could help it because I should not witness against him this 9’th may Mr Burroughs carried me up to an exceeding high mountain and showed me all the kingdoms of the earth and told me that he would give them all to me if I would write in his book and if I would not he would throw me down and brake my neck: but I told him they were non of his to give and I would not write if he threw me down on 100 pichforks: also on the 9’th may being the time of his examination Mr. George Bur-roughs did most dreadfully torment me: and also several times since. Mercy Lewis upon her oath did own this here testimony to be the truth before the jurers for In quest: august 3: 92.”

Many historians believe that Lewis’ accusation against Captain John Alden, Jr., was payback for his alleged sales of powder and ammunition to the Native-Americans in Maine, which may have indirectly resulted in the death of Lewis’ parents.

This theory is further supported by the fact that in Alden’s own account of his examination, he writes of one of the girls outright accusing him of selling supplies to the Native-Americans as well as fathering illegitimate children with Indian women:

“Then all were ordered to go down into the street, where a ring was made; and the same accuser cried out, ‘there stands Aldin , a bold fellow with his hat on before the judges, he sells powder and shot to the Indians and French, and lies with the Indian squaes, and has Indian papooses.’”

Alden’s trial abruptly ended when, with the help of some friends, he escaped from jail after 10 weeks of imprisonment and fled to New York to wait for the hysteria to die down. He later returned to Salem and was cleared of all charges.

Yet, there were some people Lewis knew personally that she didn’t accuse of witchcraft, most likely because she was related to them. One such person was Sarah Cloyce.

Despite the fact that Lewis was involved in the cases against both of Sarah’s sisters, Rebecca Nurse and Mary Easty, she spared Sarah, according to the book In The Devil’s Snare: The Salem Witchcraft Crisis of 1692:

“Thomas Cloyce’s wife Susanna was the sister of Phillip Lewis, Mercy’s father. In other words, Sarah Cloyce and Mercy Lewis were closely related by marriage: Sarah was the sister-in-law of Mercy’s paternal aunt. Probably for that reason, Mercy Lewis did not take an active role in accusing Sarah Cloyce, although she did participate in the prosecution of Rebecca Nurse and a third Towne sister, Mary Easty, who was accused later in April. Testimony about Sarah Cloyce having afflicted Mercy came not from her but from Ann Jr. Indeed, on the once occasion Mercy evidently named Sarah Cloyce, she quickly recanted. Ephraim Sheldon attested on April 10 that he had earlier witnessed one of Lewis’s fits at Ingersoll’s tavern. ‘I heard her cry out of Goodwife Cloyce and when she came to herself she was asked who she saw, she answered she saw no body they demanded of her whether or noe she did not see Goodwife Nurse or Goodwife Cloyce or Goodwife Gory [sic]. She answered she saw no body.’”

Of the numerous people Lewis accused and testified against, six were executed, one was tortured to death, one died in jail, three escaped from jail, and the rest were either pardoned, found not guilty or were never indicted.

Not much is known about Lewis’ life after the Salem Witch Trials. She gave birth to an illegitimate child and in 1701, at the age of 28, she married a man named Allen from her hometown of Falmouth. Lewis later moved to Boston with her husband and child. Her date and place of death is unknown.

Mercy Lewis later appeared as a character in Arthur Miller’s 1953 play The Crucible. In the play, Lewis is depicted as Abigail Williams’ closest friend and the two run away together at the end of the play. 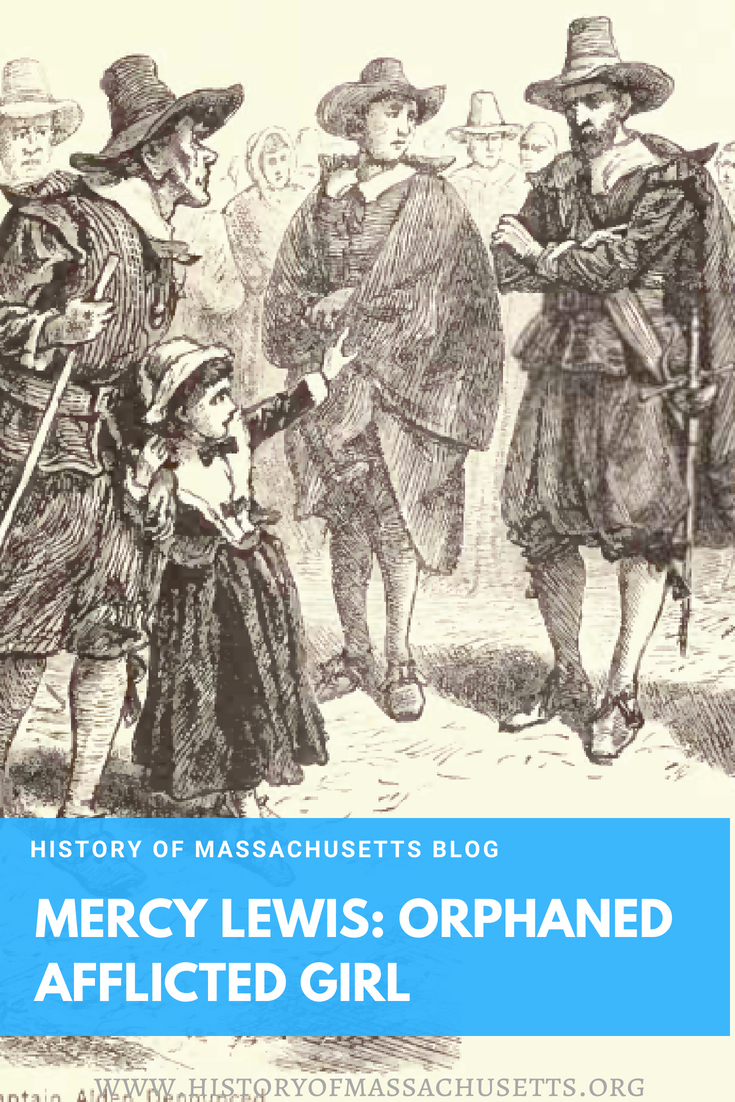