Susannah North Martin was one of a handful of accused witches during the Salem Witch Trials who did not actually live in Salem.

Born in 1621 in Buckinghamshire, England to Richard and Joan North, Susannah relocated with her father and stepmother to the Massachusetts Bay Colony and settled in Salisbury, Massachusetts in 1639.

The North family were some of the first settlers of Salisbury, which is located 40 miles north of Boston. The family lived with the other settlers on plots along the “circular road,” now known as the triangle formation of Elm street, School street and Bridge road in Salisbury square. At the time, the area was inhabited by Penacook Native Americans, wolves and wild animals.

After Susannah grew up, she married a blacksmith from Salisbury named George Martin in 1646 and eventually gave birth to eight children. In 1654, George and Susannah moved to nearby Amesbury. 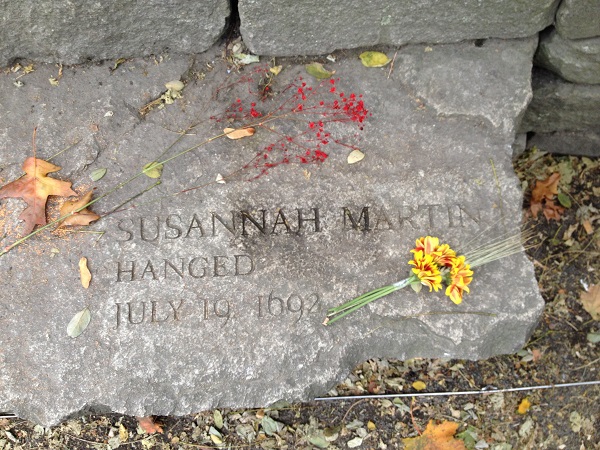 Much like the other accused witches, Susannah was also viewed by others as a troublemaker and her name appears numerous times in court records prior to the Salem Witch Trials.

Like Bridget Bishop, Susannah had also been accused of witchcraft twice before 1692. During her first witchcraft case, she was accused by William Browne of tormenting his wife Elizabeth with her spirit. After her arrest, Susannah was released on bail and the charges were eventually dropped.

She was accused again in 1669, this time by William Sargent Jr, who also said he witnessed Susannah give birth to and kill an illegitimate baby.

Susannah posted bail, promising to return to court for her trial but, again, the charges were dropped. Her husband, George, later sued Sargent for slander.

The court held Sargent libel for slander in accusing Susannah of fornication and infanticide but allowed the witchcraft accusations. The charges were later dismissed.

After several failed court battles to inherit the bulk of her father’s estate in 1671 and with the death of her husband in 1686, Susannah was left a poor, defenseless widow.

When Susannah was accused of witchcraft for the final time in 1692, she had no one to come to her rescue. According to Susannah’s arrest warrant, she was accused by the afflicted Salem village girls: Mary Walcott, Abigail Williams, Ann Putnam, Jr., and Mercy Lewis.

Since they lived in different villages, it is not known how these girls knew Susannah, but it is possible they heard about her bad reputation from others and made the decision to accuse her.

After her arrest in Amesbury on May 2, Susannah was brought to Salem Village where she was questioned by Judge John Hathorne and Judge Jonathan Corwin and twice underwent a humiliating physical examination in an effort to find a witch’s teat that prosecutors believed witches used to feed their familiars.

No such witch mark was found but the examiner did make a note that “in the morning her nipples were found to be full as if the milk would come,” but later in the day “her breasts were slack, as if milk had already been given to someone or something.”

Although most of the court records from her trial were lost, Cotton Mather, a well known minister at the time, personally documented her trial:

Despite the lack of evidence against her, Susannah was found guilty of witchcraft and hanged at Proctor’s Ledge near Gallows Hill on July 19 along with Rebecca Nurse, Sarah Good, Elizabeth Howe, and Sarah Wildes. 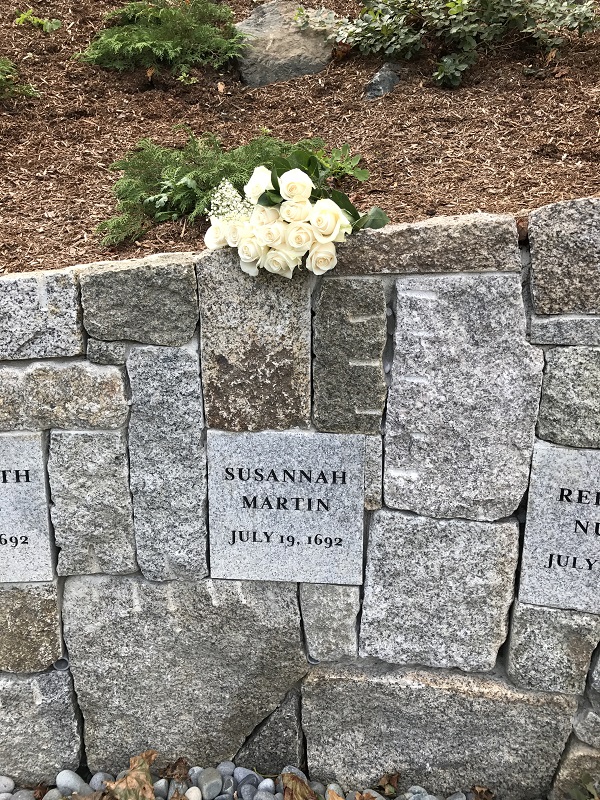 She was buried in a shallow grave near the execution site with the other victims but because the exact location of the executions has never been found, it is not known where her body currently lies.

In 1857, the poet John Greenleaf Whittier, who was a direct descendant of Susannah Martin, honored Susannah in a poem titled The Witch’s Daughter:

“Let Goody Martin rest in peace, I never knew her harm a fly,
And witch or not – God knows – not I?
I know who swore her life away;
And as God lives, I’d not condemn
An Indian dog on word of them.”

Residents of the town of Amesbury later placed a stone marker near Susannah and George Martin’s home that read:

“Here stood the house of Susannah Martin. An honest, hardworking Christian woman accused of being a witch and executed at Salem, July 19, 1692. She will be missed! A Martyr of Superstition. T.I.A. 1894”

In 1711, the Massachusetts legislature passed a resolution clearing the names of the convicted witches and offered financial restitution to their descendants. Susannah Martin’s family did not wish to be named in the law and did not seek restitution.

In 1957, the Massachusetts legislature formally apologized to the victims of the Salem Witch Trials but did not specifically mention any of the victims by name.

In 1992, the Salem Witch Trials Memorial was built in Salem, Mass and a marker was established for Susannah Martin.

In 2001, the Massachusetts legislature passed a resolution officially exonerating five of the victims not mentioned in the previous resolutions: Susannah Martin, Bridget Bishop, Alice Parker, Wilmot Redd and Margaret Scott.

In 2017, the Proctor’s Ledge Memorial was built in Salem, Mass and a marker was established for Susannah Martin.

41 thoughts on “The Witchcraft Trial of Susannah Martin”