Mary Warren was the oldest of the afflicted girls in the Salem Witch Trials and testified against numerous accused witches before she was eventually accused of witchcraft herself.

A lot of confusion surrounds Mary Warren’s case, partly because of her own vague and evasive statements during the witchcraft hysteria.

Warren, the twenty-year-old indentured servant of John and Elizabeth Proctor, began having fits in March of 1692, shortly after Betty Parris and the other afflicted girls’ symptoms began.

John Proctor, who believed the afflicted girls were lying and pretending to be bewitched, dismissed it as nonsense and threatened to beat Warren if she didn’t behave.

According to the book The Salem Witch Trials: A Day-by-day Chronicle of a Community Under Siege, on April 2nd, Warren’s fits stopped and she tacked a note on the local meetinghouse door asking for prayers of thanks for this development.

The next day, Reverend Samuel Parris read the note to his congregation, who questioned Warren after the Sunday service. At one point during the questioning, Warren stated “the afflicted persons did but dissemble.”

Although it’s not exactly clear what she meant by this statement, the congregation took it to mean that the afflicted girls were lying about their symptoms. This action may have turned the other afflicted girls against Warren or even caused them to suspect she had fallen in league with the Devil. 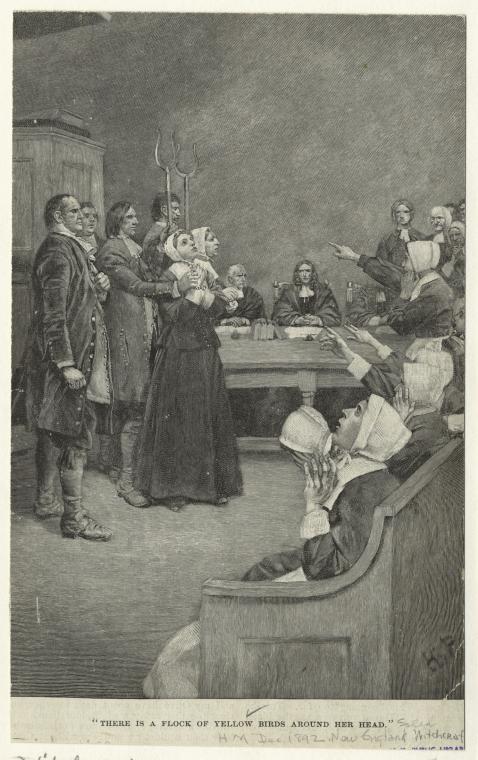 Yet as soon as Proctor left home on business shortly after, Warren’s fits returned and she joined the ongoing witch trials as a witness, much to Proctor’s dismay.

The following week, the same girls then accused John Proctor of the crime as well.

According to court records, although Warren was not one of the Proctor’s original accusers, she willingly testified against both of them during their trials, stating that they made her sign the book of the Devil and their spirits tormented and tortured her:

“Mary Warrens Confession ag’t Jo: Proctor & ux charges them personally to cause her to sign or make a mark in there book and both of them committing acts of Witchcraft & being so & personally threatened the [illegible] with tortures if she would not sign & since con [page torn] have of times afflicted & tormented her large in her confessions vide.”

Like most critics of the witch trials, John Proctor’s attitude made him a prime target for the accusation of witchcraft and his criticism of the trials, as well as his mistreatment of Warren, came back to haunt him during his trial.

One witness, Samuel Sibley testified that he had a conversation with Proctor on March 25 at Walter Phillip’s tavern during which Proctor referred to Warren as a “jade” (an old-fashioned equivalent to the modern word “bitch”) and stated he would rather have paid money than allow her to become involved in the trials.

Sibley testified that Proctor also said the afflicted girls should be whipped and hanged for lying and that he was on his way to Salem village center to retrieve Warren, who had spent the night there after Rebecca Nurse‘s examination, after which he planned to bring her home and beat her, according to court records:

“The morning after the examination of Goody Nurse. Sam Sibley met John Proctor about Mr Phillips w’o called to said Sibley as he was going to sd Phillips & asked how the folks did at the village. He answered he heard they were very bad last night but he had heard nothing this morning. Proctor replied he was going to fetch home his jade he left her there last night & had rather given 40d than let her come up. sd Sibley asked why he talked so. Proctor replied if they were let alone so we should all be Devils & witches quickly they should rather be had to the whipping post but he would fetch his jade home & thresh the Devil out of her & more to the like purpose, crying hang them, hang them. And also added that when she [Warren] was first taken with fits he kept her close to the [spinning] wheel & threatened to thresh her, & then she had no more fits till the next day he was gone forth, & then she must have her fits again firsooth &.”

It was during Elizabeth Proctor’s trial that the seed of suspicion was planted against Warren when Ann Putnam, Jr, and Abigail Williams testified that Warren helped Proctor’s spirit try to make them touch the Devil’s book, according to the book The Salem Witch Trials: a Reference Guide:

“’She does not bring the book to you, does she?’ asked the magistrate.
‘Yes, sir, often, and saith she hath made her maid set her hand to it.’ (So now Mary Warren was suspected as well.)
‘What would she have you do with it?’
‘To write in it and I shall be well.’ said Abigail. She turned to Goody Proctor. ‘Did you not tell me that your maid had written?’
‘Dear child,’ said Elizabeth Proctor. ‘It is not so. There is another judgement, dear child.’ Lying was an even more serious matter before God than before the courts.”

Arrest warrants were issued and they were examined in court the next day. According to court records, Judge John Hathorne asked Warren how she came to be an accused witch:

“[Hathorne]:Mary Warren, You stand here charged with sundry acts of Witchcraft, what do you say for yourself, are you guilty, or not?
[Warren]: I am innocent.
[Hathorne]: Hath she hurt you (speaking to the sufferers)?
Some were dumb.
Betty Hubbard testified against her, & then Hubbard fell into a violent fit.
[Hathorne]: You were a little while ago an Afflicted person, now you are an Afflicter: How comes this to pass?
[Warren]: I look up to God, & take it to be a great Mercy of God.
[Hathorne]: What do you take it to be a great mercy to afflict others?’
Betty Hubbard testified that a little after this Mary was well, she the said Mary, said that the afflicted persons did but dissemble.
Now they were all but John Indian grievously afflicted, & Mrs Pope also, who was not afflicted before hitherto this day: & after a few moments John Indian fell into a violent fit also.
Well here was one just now that was a tormentor in her apparition & she owns that she had made a league with the Devil.
Now Mary Warren fell into a fit, & some of the afflicted cried out that she was going to confess, but Goody Corey , & Procter, & his wife came in, in their apparition, & struck her down, & said she should tell nothing.
Mary Warren continued a good space in a fit, that she did neither see, nor hear, nor speak.
Afterwards she started up, & said I will speak & cryed out, Oh! I am sorry for it, I am sorry for it, & wringed her hands, & fell a little while into a fit again & then came to speak, but immediately her Teeth were set, & then she fell into a violent fit, & cryed out, Oh Lord help me, Oh good Lord save me!
And then afterwards cryed again, I will tell, I will tell, & then fell into a dead fit again.
And afterwards cryed, I will tell, they did, they did, they did, & then fell into a violent fit again.
After a little recovery she cryed I will tell, I will tell, they brought me me to it; & then fell into a fit again: which fits continuing, she was ordered to be had out, & the next to be brought in, viz: Bridget Bishop
Some time afterwards she was called in again, but immediately taken with fits, for a while.
[Hathorne]: Have you signed the Devils book?
[Warren]: No.
[Hathorne]: Have you not touch it?
[Warren]: No.
Then she fell into fits againe, & was sent forth for air.
After a considerable space of time she was brought in again, but could [not] give account of things, by reason of fits, & so sent forth.
Mary Warren called in, afterwards in private, before magistrates & Ministers.
She said, I shall not speak a word: but I will speak Satan — She saith she will kill me: Oh! she saith, she owes me a spite, & will claw me off –Avoid Satan, for the name of God avoid And then fell into fits again: & cryed will ye I will prevent ye in the Name of God, —
[Hathorne]: Tell us, how far have you yielded?
A fit interrupts her again.
[Hathorne]: What did they say you should do, & you should be well?
Then her lips were bit so that she could not speak. so she was sent away
Note: That not one of the sufferers was afflicted during her examination after once she began to confess, thom they were tormented before.”

Some sources state that during her examination, Warren told the court the afflicted girls were lying.

Yet, these court records indicate that one of the afflicted girls, Elizabeth Hubbard, merely reiterated Warren’s previous statements from the church on April 3rd that “the afflicted persons did but dissemble.”

At no point does Warren herself state the girls were lying during this examination nor does she do so in her later examinations.

Warren was examined by the judges a total of four times, twice in prison and twice in court.

She gave vague, indirect answers during her first examination but eventually confessed to touching the Devil’s book, although she explained that she was tricked into it by Elizabeth and John Proctor’s spirits who told her it was a good book.

These statements saved her life, since witches who confessed were spared the death penalty and released, but she may also have condemned the Proctors to death in the process. Warren was released from prison in June of 1692.

Of the people she testified against, eight were hanged, one was tortured to death, one died in jail and the rest were either found not guilty, pardoned or escaped.

Mary Warren After the Trials:

It is not known what happened to Mary Warren after the Salem Witch Trials ended. Reverend John Hale’s book A Modest Inquiry Into the Nature of Witchcraft, written in 1697, mentions an anonymous afflicted girl who suffered from “diabolical manifestation” until her death and died a single woman.

Since most of the afflicted girls were known to be married by 1697 and only three of the girls, Abigail Williams, Elizabeth Hubbard and Mary Warren, are unaccounted for in the records at the time, it is possible Hale was referring to Warren.

Warren appeared as a character in Arthur Miller’s 1953 play The Crucible. In the play, Miller depicted Warren as an afflicted girl who recants her previous confessions and testimony against the Proctors, although there is no record of her doing so during the trials (other than Warren’s statement at the church in April that the “afflicted persons did but dissemble.”) 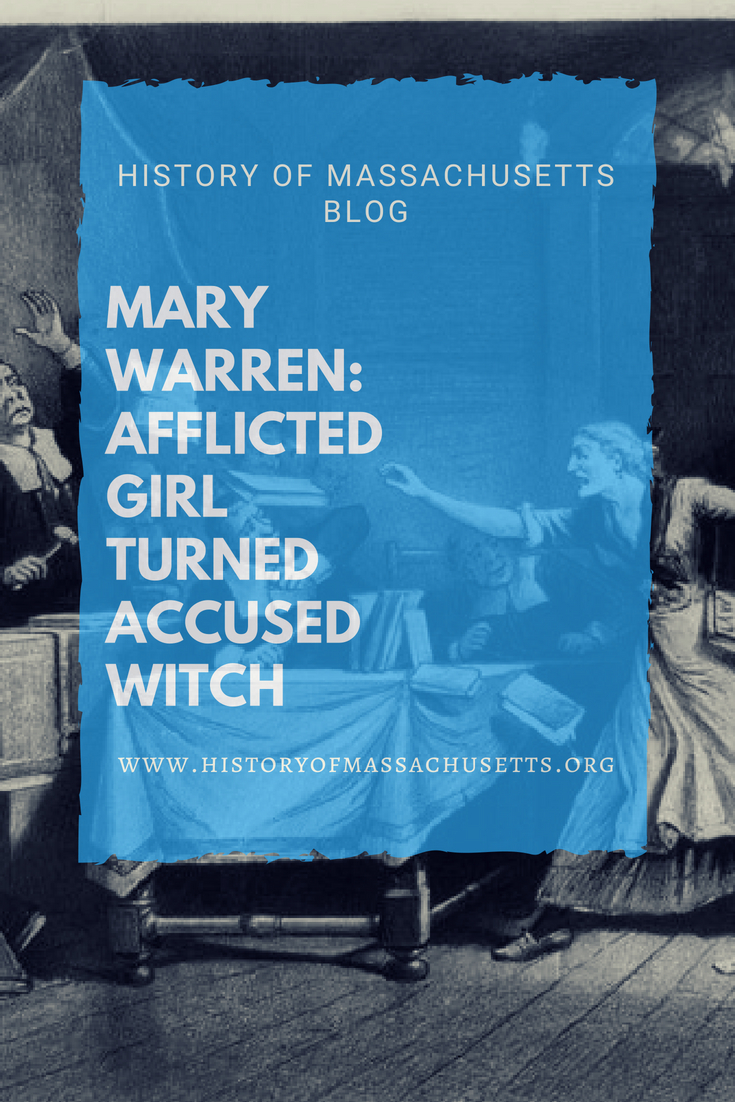 6 thoughts on “The Witchcraft Trial of Mary Warren”