Sarah Good was one of the first women to be accused of witchcraft during the Salem Witch Trials of 1692.

Good was the wife of William Good and, at the time of the Salem witch hysteria, was a poor, pregnant beggar who would often wander door to door asking for handouts while her husband worked as a day laborer.

As a result, Good was a prime target for the accusation of witchcraft in the small Puritan-run town where nonconformity was frowned upon.

For years before the hysteria even began, Good and her husband had a number of disagreements with other Salem residents that made them very unpopular in the town.

Sarah Abbey testified during the trials that three years prior she had allowed Sarah Good and her husband to stay in her home but eventually kicked her out because she was “spiteful” and “malicious” and ever since then the Abbey family lost numerous cattle to mysterious illnesses, which she believed was the work of Good’s witchcraft.

Sarah Gadge also testified that after she refused to let Sarah Good into her home one day, Good muttered something under her breath and the following day one of her own cows died mysteriously as well.

Good was officially accused of the witchcraft in February of 1692 after two girls, Abigail Williams and Betty Parris, began behaving strangely and having fits.

When questioned by adults about who was causing these fits, the girls accused Sarah Good along with Tituba and Sarah Osburn, according to the book Salem Witchcraft:

“It must be borne in mind, that it was then an established doctrine in theology, philosophy, and law, that the Devil could not operate upon mortals, or mortal affairs, except through the intermediate instrumentality of human beings in confederacy with him, that is, witches or wizards. The question, of course, in all minds and on all tongues, was, ‘Who are the agents of the Devil in afflicting these girls? There must be some among us thus acting, and who are they?’ For some time the girls held back from mentioning names; or, if they did, it was prevented from being divulged to the public. In the mean time, the excitement spread and deepened. At length the people had become so thoroughly prepared for the work, that it was concluded to begin operations in earnest. The continued pressure upon the ‘afflicted children,’ the earnest and importunate inquiry, on all sides, ‘Who is it that bewitches you?’ opened their lips in response, and they began to select and bring forward their victims. One after another, they cried out ‘Good,’ ‘Osburn,’ ‘Tituba.’ On the 29th of February, 1692, warrants were duly issued against those persons. It is observable, that the complainants who procured the warrants in these cases were Joseph Hutchinson, Edward Putnam, Thomas Putnam, and Thomas Preston. This fact shows how nearly unanimous, at this time, was the conviction that the sufferings of the girls were the result of witchcraft.”

The three women were arrested and examined on March 1, 1692. They denied any wrongdoings until Tituba, a slave owned by Reverend Samuel Parris, admitted that they had all met with the devil and agreed to do his bidding. 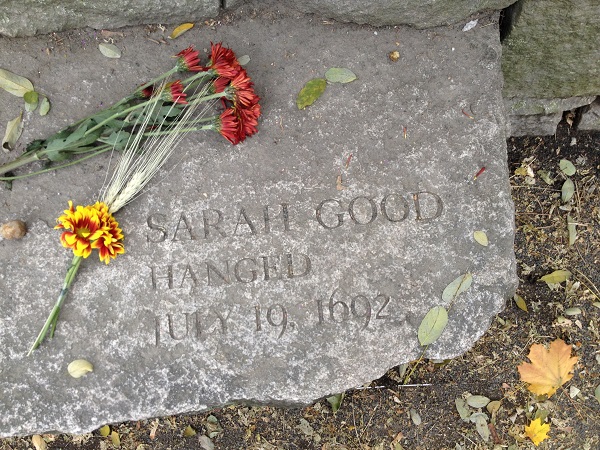 Although she admitted to working with the devil, Tituba at first blamed Sarah Good and Sarah Osbourne for tormenting the afflicted girls. She then admitted to hurting them as well when other unnamed witches forced her to do so, stating during her examination:

Tituba then apologized for hurting the girls and promised not to do so anymore. It is not known exactly why Tituba confessed to being a witch but it is believed that since she was not a Puritan and already held a low status in the village, she was more concerned with escaping the gallows than with the consequences of confessing to witchcraft, something Puritans believed would damn one’s soul to an eternity in hell and result in being cast out of the community.

Many historical sources have tried to paint Good as a sad, sick, broken-down old woman during the trials, yet Good’s behavior in and out of the courtroom gave no indication of this, according to an article in The New England magazine:

“Calef says she had long been counted a melancholy or distracted woman; and Upham says she was broken down by the wretchedness of her condition and ill-repute. Her answers to the questions propounded to her, as the reader will see, give no evidence of coming from a person ‘broken down,’ or ‘forlorn.’ She appears to have answered with a fair degree of spirit. During most of the first week in March, while on trial before the local magistrates, Sarah Good was taken to Ipswich jail every night and returned in the morning, a distance of about ten miles each way. From the testimony of her keepers and the officers who escorted her to and from jail, we learn that she exhibited considerable animation. She leaped off her horse three times, railed at the magistrates, and endeavored to kill herself.”

On March 7, Osbourn, Good and Tituba were sent to a jail in Boston to await trial. Good remained in Boston until June 28, when the just officially indicted her on multiple charges of “certain detestable arts called witchcraft and sorceries, wickedly and feloniously hath used, practised and exercised, at and within the township of Salem within the county of Essex aforesaid.”

She was charged with using these acts of witchcraft against three people: Sarah Bibber, Elizabeth Hubbard and Ann Putnam, Jr.

On March 24, Good’s four-year-old daughter, Dorothy (who is sometimes referred to as Dorcas in the court records), was also arrested on charges of witchcraft after she was accused by Edward Putnam and John Putnam on behalf of the afflicted girls.

There are three depositions on file against Dorothy, by Mary Walcott, Ann Putnam, Jr., and Mercy Lewis, but it does not appear that she ever stood trial.

Although Dorothy was just a child, the depositions accuse her of physically hurting and torturing the girls, as can be seen in Ann Putnam, Jr.’s, deposition:

“The deposition of Ann Putnam who testifieth and saith that on the 3th March 1691/92 I saw the apparition of Dorothy Good, Sarah Good’s daughter, who did immediately almost choke me and tortured me most greviously; and so she hath several times since tortured me by biting and pinching and almost choking me tempting me also to write in her book and also on the day of her examination being the 24th of March 1691/92 the apparition of Dorothy Good tortured me during the time of her examination and several times since.”

Dorothy Good spent seven to eight months in jail before being released and, as a result of the experience, she was never the same, according to the book The Salem Witch Trials Reader:

“Eighteen years later her father, William Good, was to write that ‘she was in prison seven or eight months and being chained in the dungeon was so hardly used and terrified that she hath ever since been very chargeable, having little or no reason to govern herself.’ By ‘very chargeable;’ he meant a financial burden: When she came out and for the rest of her days, he had to pay a keeper to take care of her.”

Sarah Good wasn’t tried until June of 1692. No actual evidence of the crime was ever presented during the trial and one of the young accusers was even caught in a lie when she claimed Good’s spirit stabbed her with a knife, according to an article in The New England magazine:

“During this trial, one of the witnesses who sat in the room, cried out that Good had stabbed her, and had broken the knife-blade in so doing. The point of the blade was taken from her clothes where she said she was stabbed. There-upon a young man arose in the court and stated that he broke that very knife the previous day and threw away the point. He produced the remaining part of the knife. It was then apparent that the girl had picked up the point which he threw and put it in the bosom of her dress, whence she drew it to corroborate her statement that someone had stabbed her.”

Remarkably, the girl was only warned not to lie in the courtroom and the case continued.

Good never confessed to being a witch but, according to court records, she did break down during her examination by Judge John Hathorne and accused Sarah Osbourne of tormenting the girls, possibly to divert attention from herself:

Good was ultimately convicted but her execution was pushed back until the birth of her child. Good’s infant died in prison shortly after its birth and local officials brought Good to the execution site at Proctor’s Ledge on July 19, along with Rebecca Nurse, Susannah Martin, Elizabeth Howe, and Sarah Wildes. 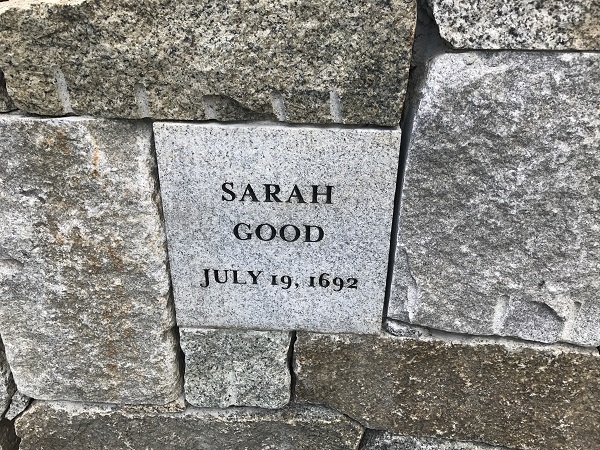 According to an article in The New England Magazine, as Sarah Good stood on the platform with the other women, Reverend Nicolas Noyes called Good a witch and urged her to confess. Good replied:

“You are a liar. I am no more a witch than you are a wizard, and if you take away my life God will give you blood to drink!”

The five women were hanged and most likely buried near the execution site because convicted witches were not allowed to be buried in consecrated ground.

Twenty-five years later, in 1717, Reverend Noyes suffered an internal hemorrhage and died choking on his own blood.

Sarah Good later appeared in Arthur Miller’s 1953 play The Crucible as a poor beggar woman who is looked down upon by Salem society.

In 1992, the Salem Witch Trials Memorial was built in Salem, Mass and a marker was established for Sarah Good.

In 2017, the Proctor’s Ledge Memorial was built in Salem, Mass and a marker was established for Sarah Good.

2 thoughts on “The Witchcraft Trial of Sarah Good”