Rebecca Nurse was such a beloved citizen of Salem Village that when she was arrested for witchcraft in March of 1692, thirty-nine Salem residents came to her defense and signed a petition asking to set her free.

The actions of her friends and family were remarkable because in signing the petition, these thirty-nine people essentially risked their own lives by marking themselves as potential targets for the charge of witchcraft.

During the Salem Witch Trials, it was no secret that anyone who criticized the witch trials or came to the defense of an accused witch was often targeted themselves.

Examples of this include John Proctor and Giles Corey, both of whom were accused after they spoke out against the witch trials while defending their wives and family members against witchcraft accusations.

A few signers of the petition, Israel Porter, Elizabeth Porter and Daniel Andrew, also provided written testimony in defense of Rebecca Nurse for her trial, with an offer to testify under oath if necessary. Their written testimony highlighted Nurse’s faith in God, her frailty and her devotion to her family:

“We whos nams Are under writen being desiered to goe to goodman nurs his hous to speeke with his wife and to tell her that several of the Aflicted persons mentioned her: and Acordingly we went and we found her in A weak and Lowe condition in body as shee told us and had been sicke allmost A weak and we asked how it was otherwis with her and shee said shee blest god for it shee had more of his presents in this sickens then sometime shee have had but not soe much as shee desiered: but shee would with the Apostle pres forward to the mark: and many other places of scriptur to the Like purpos: and then of her owne Acord shee begane to speek of the Affliction that was Amongst them and in perticuler of Mr Parris his family and howe shee was greved for them though shee had not been to see them: by Reason of fits that shee formerly use to have for people said it was Awfull to:behold: but shee pittied them with: all her harte: and went to god for them: but shee said shee heard that there was persons spoke of that wear as Innocent as shee was shee belived and After much to this purpos: we told her we heard that shee was spoken of allsoe: well she said if it be soe the will of the Lord be done: she sate still awhille being as it wear Amazed: and then shee said well as to this thing I am Innocent as the child unborne but seurly shee said what sine hath god found out in me unrepented of that he should Lay such an Affliction upon me In my old Age: and Acording to our best observation we could not decern that shee knewe what we came for before we tould her
Israel porter
Elizabeth porter
To the substance of what is Above we if caled there too: are Ready to testifie on: oath
Daniell Andrew
Peter Cloys”

Edward Bishop Jr., the son of petitioner Edward Bishop, along with his wife Sarah, was accused of witchcraft on April 2 by Ann Putman, Jr., Mercy Lewis, Abigail Williams, Thomas Putnam and John Buxton. The Bishops were arrested and sent to a jail in Boston but escaped in October and never stood trial.

Another petitioner, Daniel Andrew, along with his sister Rebecca Jacobs, George Jacobs Jr., Sarah Buckely and Mary Witheridge, was accused of witchcraft on May 14 by Mary Walcott, Abigail Williams, Mary Lewis, Nathaniel Ingersoll and Thomas Putnam.

All but Daniel Andrew and George Jacobs Jr, who quickly fled town, were arrested. On the back of Andrew’s arrest warrant, constable Jonathan Putnam wrote:

“In prosecution of this warant I have apprehended and brought the bodyes of Sarah Buckley and Marye Withredg and Rebekah Jacobs all of Salem village according to the tener of the within written warrant: and have Likewise made delegant sarch at the house of Daniell Andrew and at the house of Georg Jacobs for them Likewise but cannot find them”

Fortunately, Daniel Andrew was never arrested and never stood trial. His sister Rebecca Jacobs stood trial but was found not guilty while George Jacobs Sr was found guilty and hanged.

Although most of the petitioners were never accused and the ones that were managed to escape the gallows, Rebecca Nurse was not so lucky.

After a short trial and an original verdict of “not guilty,” Nurse was found guilty of witchcraft and hanged at Proctor’s Ledge near Gallows Hill on July 19, 1692. 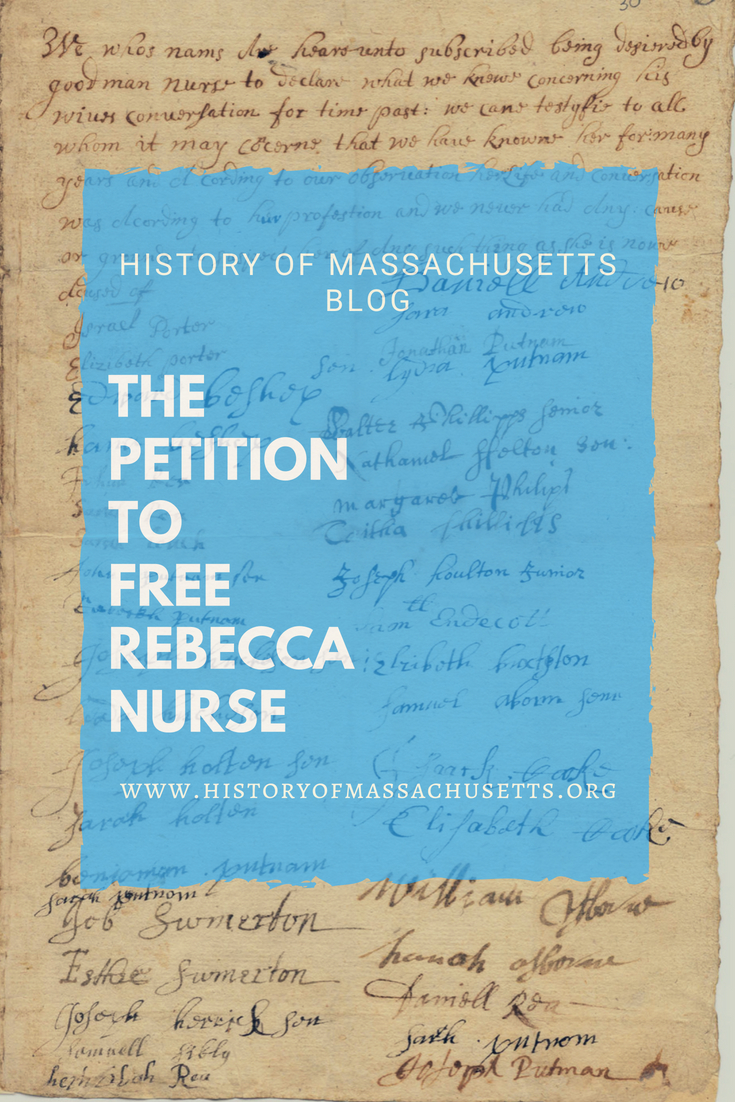 6 thoughts on “The Petition to Free Rebecca Nurse”