Massachusetts colonists were the first to fight in the Revolutionary War and they also made up the majority of the soldiers in the war. They served as militiamen, minutemen and soldiers in the Continental Army.

The first minutemen of the American Revolution were organized in Worcester county, Mass in September of 1774 when officials at the Worcester County Convention decided to weed out loyalists in the militia by requiring the resignation of all officers and then reconstituting the militia into seven regiments with new officers.

Officials then called for each regiment to put aside one-third of its regiment to form into new, special companies called minutemen. These men were expected to keep their arms and equipment with them at all times and be ready to march at a minute’s warning.

A handful of other counties voluntarily adopted this policy and when the Massachusetts Provincial Congress met in Salem in October of 1774 it urged all counties to adopt the policy.

The first test of the minutemen was at the Battle of Concord and the Battle of Lexington on April 19, 1775, during which hundreds of minutemen battled British troops on the Lexington Green and at the Old North Bridge in Concord. 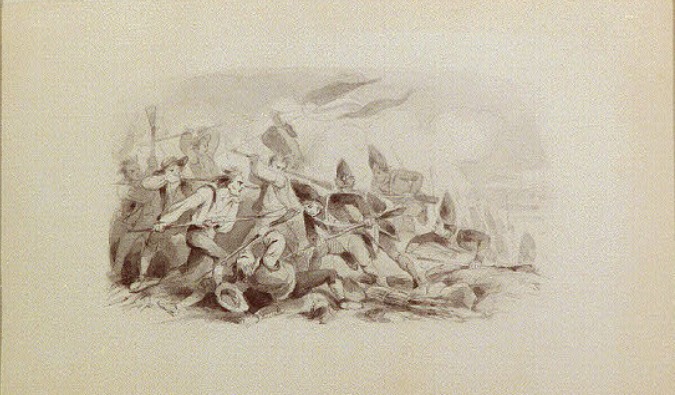 Although the minutemen lost the Battle of Lexington, they won the Battle of Concord and drove the British troops back to Boston where the state militia blockaded the troops in Boston, in what later became known as the Siege of Boston.

The minuteman units were later abandoned when the Continental Army was established in June of 1775 but the state militia continued.

Notable Massachusetts militiamen and minutemen in the Revolutionary War:

Was Paul Revere a Minuteman?

Contrary to popular opinion, Paul Revere was not a minuteman but he did warn the minutemen, during his famous Midnight Ride, that the British troops were approaching Concord on the night of April 18/19 in 1775.

Paul Revere later served as a Lieutenant Colonel in the Massachusetts Militia but was court-martialed in 1779 for disobey orders during the failed Penobscot Expedition in Maine. Revere was later cleared of all charges in 1782.

When the Continental Army was first established in June of 1775, out of the 37,363 soldiers who enlisted in the first year, about 16,449 were from Massachusetts.

This is not that surprising though since the American Revolution began in Massachusetts and it was the first colony to be occupied by the British.

However, in almost every year of the Revolutionary War, the majority of soldiers in the Continental Army were from Massachusetts, according to Ainsworth Rand Spofford in his book Massachusetts In The American Revolution:

“Thus, in 1777, long after the evacuation of Massachusetts by the enemy, we find that 12,591, out of 68,720 troops enlisted, were from Massachusetts; being a larger number than any other state contributed. The same lead was maintained throughout the war, except in 1779 and 1780, when Virginia’s soldiers and military actually in the field exceeded those of Massachusetts by a few hundred, while in 1782 (which witnessed the virtual close of the struggle), Massachusetts put 4,423 men in the field, out of a total of 18,006 in the Continental Army, Virginia having only 2,204 at the same period…Other regions witnessed more decisive battles, and continued for a much longer time, the immediate theatre of war; but Massachusetts soldiers marched or sailed to every colony, and bore their part in every important battle, from Bunker Hill down to Yorktown.”

Among these 68,720 Massachusetts soldiers, about 1,700 were African American and Native American men. These soldiers fought in the some of the most important battles of the Revolutionary War, such as Battle of Bunker Hill in June of 1775 where 150 African-American soldiers served. 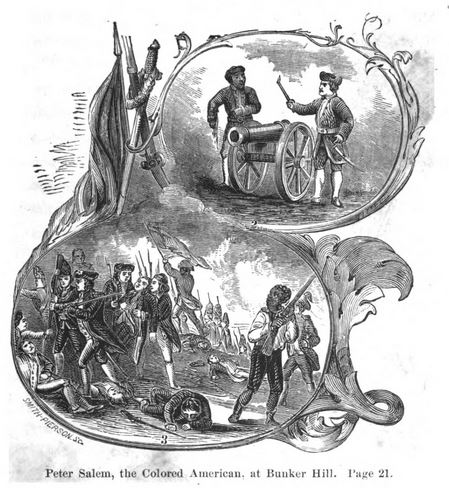 Peter Salem at Bunker Hill, illustration published in The Colored Patriots of the American Revolution, circa 1855

When George Washington later prohibited the enlistment of African-American men in the Continental Army, in November of 1775, the matter was taken up by Congress who declared on January 15, 1776:

“That the free negroes who have served faithfully in the army at Cambridge may be reenlisted therein, but no others.”

That year Massachusetts set its own criteria for the enlistment of African Americans by passing two acts in 1776. The first was passed on January 26 and the second of November 14 which specifically exempted “Negroes, Indians and mulattoes” from military service in the Massachusetts militia.

This didn’t seem to stop Massachusetts African-Americans from enlisting though, according to the book Forgotten Patriots: African-American and American Indian Patriots in the Revolutionary War by Eric G. Grundset:

“It is evident that in spite of the resolutions passed in 1776, Massachusetts African Americans were already serving in the army. A June 1, 1777 muster roll of Captain Charles Colton’s 2nd Company in Colonel John Greaton’s 3rd Massachusetts Regiment included the names of eleven African American men, most of who had enlisted prior to the January 27 act. The Baroness von Riedesel, who was among a group of American-held prisoners being escorted through western Massachusetts in the fall of 1777, wrote in a letter, ‘…you do not see a regiment in which there is not a large number of blacks…’”

When Massachusetts began having a hard time meeting the State’s quota for the army set by Congress, the legislature passed another act on January 27, 1777, that exempted only Quakers.

Finally, on April 28, 1778, the Massachusetts legislature passed a law officially allowing the enlistment of African-Americans.

Some Massachusetts African-Americans who served in the Continental Army were:

What Type of Uniforms Did Massachusetts Soldiers Wear?

Minutemen were citizen soldiers and didn’t have an official uniform so they instead wore regular clothing, which consisted of waistcoats, linen hunting shirts and breeches.

American soldiers early in the war wore long, brown coats. When the Continental Army’s uniforms were standardized in 1779, each regiment was assigned a blue coat with facings of a particular color to indicate their regiment. The New England states of Massachusetts, New Hampshire, Connecticut, and Rhode Island wore blue coats with white facings.

For more information on this topic, check out the following article What Type of Uniforms Did Revolutionary War Soldiers Wear?

The names of all of the Massachusetts soldiers who served in the Continental Army are too numerous to list here but the following books and websites have partial and/or complete lists:

♦ Massachusetts Sailors and Soldiers in the Revolutionary War: Volume 1-17.

♦ A List of the Soldiers in the War of the Revolution, from Worcester, Mass: With a Record of their Death and Place of Burial. Worcester by Mary Cochran Dodge

♦ Soldiers of Oakham, Massachusetts in the Revolutionary War, the War of 1812, the Civil War by Henry Parks Wright