The Shot Heard Round the World occurred during a brief battle between British troops and local minutemen at the North Bridge in Concord, Massachusetts during the Revolutionary War.

When Did the Shot Heard Round the World Happen?

The shot heard round the world took place on April 19, 1775 after British troops searching for ammunition stockpiles in Concord encountered the local minutemen.

The battle came to be known as the Battle of Concord. Several of the British soldiers were killed during the battle and the battle itself was considered the first victory in the fight for America’s independence.

As a result, the battle inadvertently kick started not only the Siege of Boston but the Revolutionary War as well.

What is the Meaning of the Shot Heard Round the World?

Over the years, the meaning of the phrase, as well as the exact location of the Shot Heard Round the World, has gotten muddled.

Many writers and historians have attributed the phrase to the first shot fired at the Battle of Lexington, which occurred earlier in the day and was one of the first battles of the Revolutionary War.

Yet the actual phrase “Shot Heard Round the World” comes from Ralph Waldo Emerson’s poem about the Battle of Concord, titled, Concord Hymn: Sung at the Completion of the Battle Monument, July 4, 1837:

“By the rude bridge that arched the flood,
Their flag to April’s breeze unfurled,
Here once the embattled farmers stood,
And fired the shot heard ’round the world”

The phrase indicates that the shots fired at British troops during the Battle of Concord marked America’s first victory against the powerful British army, which in turn sparked the Revolutionary War and lead to America’s independence. 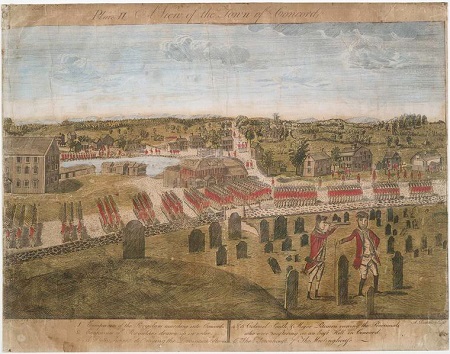 According to the book Founding Myths: Stories That Hide Our Patriotic Past, many historians and writers have instead attributed the Shot Heard Round the World to the Battle of Lexington because that battle, which consisted of 700 British soldiers firing upon just 70 minuteman, better fit the image they wanted to promote of the large bullying British army being defeated by a small defiant army.

What Happened at the Battle of Lexington?

The British were not defeated at the battle of Lexington though and it is not even clear who fired the first shot of that battle, the British soldiers or the minutemen.

One of the few witnesses to the battle, Paul Revere, who had warned the minutemen of the British advancement on his midnight ride, was present when the British soldiers arrived in Lexington yet did not see who fired the first shot, as he wrote in his personal account of that day:

“I heard the report [of the gun], turned my head, and saw the smoke in front of the British troops, they immediately gave a great shout, ran a few paces, and then the whole fired. I could first distinguish irregular firing, which I suppose was the advance guard, and then platoons. At the time I could not see our Militia, for they were covered from me, by a house at the bottom of the street.”

When the smoke cleared, eight minutemen and one British soldier lay dead. Both sides accused each other of firing the first shot, according to the book Primary Source Accounts of the Revolutionary War. One British soldier, William Sutherland, gave his account of the events:

“I heard Major Pitcairn’s voice call out. ‘Soldiers, don’t fire, keep your ranks, form and surround them.’ Instantly some of the villains [the colonists] who got over the hedge fired at us which our men for the first time returned…”

“…swung his sword, and said, ‘Lay down your arms, you damned rebels, or you are all dead men – fire!’ Some guns were fired by the British at us from the first platoon, but no person was killed or hurt, being probably charged only with gunpowder…The company immediately dispersed; and while the company was dispersing and leaping over the wall, the second platoon of the British fired, and killed some of our men. There was not a gun fired by any of Captain Parker’s company, within my knowledge.”

Since both sides give contradicting accounts, it will probably never be known who fired the first shot in Lexington.

Who Fired the Shot Heard Round the World?

After the battle of Lexington was over, the British marched on to Concord where they were finally thwarted by minuteman on the North Bridge.

According to a report from British Lieutenant Colonel Francis Smith, of the 10th Regiment, to General Thomas Gage, the British fired first on the North Bridge but the minutemen quickly returned fire and overwhelmed them:

“While at Concord we saw vast numbers assembling in many parts; at one of the bridges they marched down, with a very considerable body, on the light infantry posted there. On their coming pretty near, one of our men fired on them, which they returned; on which an action ensued, and some few were killed and wounded. In this affair, it appears that after the bridge was quitted, they scalped and otherwise ill-treated one or two of the men who were either killed or severely wounded, being seen by a party that marched by soon after…On our leaving Concord to return to Boston, they began to fire on us from behind the walls, ditches, trees, etc., which, as we marched, increased to a very great degree, and continued without the intermission of five minutes altogether, for, I believe, upwards of eighteen miles; so that I can’t think but it must have been a preconcerted scheme in them, to attack the King’s troops the first favourable opportunity that offered, otherwise, I think they could not, in so short a time as from our marching out, have raised such a numerous body, and for so great a space of ground. Notwithstanding the enemy’s numbers, they did not make one gallant effort during so long an action, though our men were so very much fatigued, but kept under cover.” 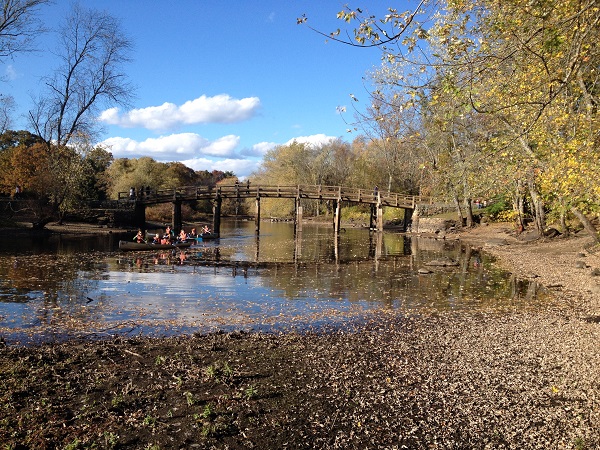 During their retreat back to Boston, the British troops suffered many casualties along the way due to the heavy gunfire from snipers who were using the local geography of the area to create ambushes along the road back to Boston.

After the British troops arrived back in Boston, the minutemen surrounded the city and refused to let the troops leave.

The British army also blockaded the exits from inside the city and refused to let anyone leave or enter the city. This standoff later came to be known as the Siege of Boston during which the Battle of Bunker Hill took place. 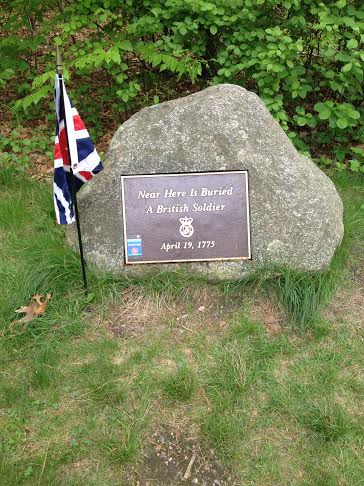 Grave of a British soldier killed in Lexington during the retreat to Boston after the battle of Concord. Located at the Paul Revere Capture Site, Lexington, Mass. Photo Credit: Rebecca Brooks

After the siege ended in March of 1776 when the British were forced to leave Boston and the war moved onto New York.

Where Were the First Shots of the American Revolution Fired?

Technically, the first shots of the American Revolution were fired at Lexington but the Shot Heard Round the World was fired in Concord.

The debate about the official birthplace of the Revolutionary War began shortly after the war and has continued for centuries.

In 1824, General Marquis de Lafayette visited the Boston area and was welcomed in Lexington with an arch that read: “Welcome, friend of America, to the birth place of American liberty.”

He then traveled to Concord where he was then welcomed with a speech indicating Concord was the birthplace of American liberty, according to de Lafayette’s memoirs:

“You, sir, now behold the spot on which the first forcible resistance was made to a system of measures calculated to deprive the whole people of these states of the privilege of freemen.”

The topic became so controversial that during the centennial celebration of the battles in 1875, President Ulysses S. Grant almost avoided attending the celebrations to evade the issue, according to an article in the Boston Globe.

In 1894, the issue came up again when the Lexington Historical Society tried to petition the state legislature to proclaim April 19 as “Lexington Day,” which Concord residents objected to.

A compromise was reached, resulting in the current holiday named “Patriot’ Day.” 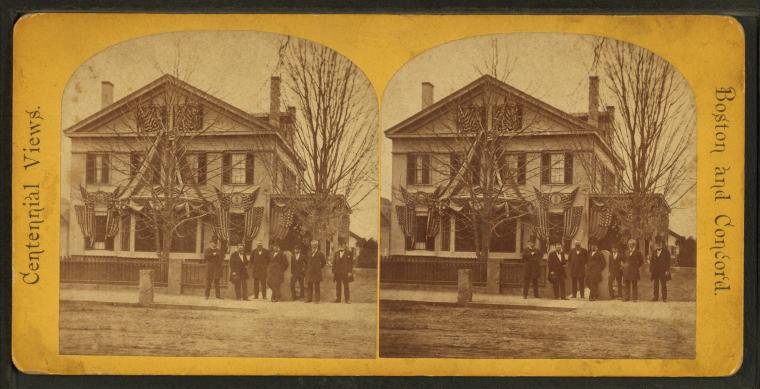 President Ulysses S. Grant and his cabinet at Judge Hoar’s house in Concord during the Battle of Concord centennial celebrations, circa 1875

In 1837, Emerson was asked to write a poem to be read during the dedication ceremony of the Battle Monument statue which had been erected at the original site of the North Bridge (the bridge no longer existed at the time because it had been destroyed during a flood.) The inscription on the monument reads:

“Here on the 19 of April, 1775, was made the first forcible resistance to British aggression. On the opposite Bank stood the American Militia. Here stood the Invading Army and on this spot the first of the Enemy fell in the War of that Revolution which gave Independence to these United States. In gratitude to GOD and In the love of Freedom this Monument was erected AD. 1836.”

The poem was sung as a hymn to the tune of Old Hundred at the dedication ceremony on July 4, 1837, but Emerson was not present because he was in Plymouth at the time. The following is the poem in its entirety:

By the rude bridge that arched the flood,
Their flag to April’s breeze unfurled,
Here once the embattled farmers stood
And fired the shot heard round the world.

The foe long since in silence slept;
Alike the conqueror silent sleeps;
And Time the ruined bridge has swept
Down the dark stream which seaward creeps.

On this green bank, by this soft stream,
We set today a votive stone;
That memory may their deed redeem,
When, like our sires, our sons are gone.

Spirit, that made those heroes dare
To die, and leave their children free,
Bid Time and Nature gently spare
The shaft we raise to them and thee.

It is not clear if Emerson intentionally tried to do so, but the words of the poem further spurred the debate about the original birthplace of the American Revolution.

The Minute Man National Park – site of Battle of Concord
Address: 174 Liberty St, Concord, Mass. Located at the park is the Old North Bridge, two monuments dedicated to the battle, a grave of unknown British soldiers who died at the battle and Battle Road, which is a five mile trail between Lexington and Concord used by Revere and the British soldiers. Located along Battle Road is the Paul Revere Capture site and another grave of unknown British soldier killed during the retreat back to Boston.

5 thoughts on “Where Did the Shot Heard Round the World Happen?”