Boston, Massachusetts is known as “the birthplace of the American Revolution” because many historic events took place there during the revolution.

Boston played an important role in the American Revolution because it was the capital of the Province of Massachusetts Bay, the home of the colonial government, and the center of trade and commerce of the colony.

Once the Revolutionary War started in April of 1775, Boston became an important military objective to both the British and the colonists.

Boston harbor was the main port for importing and exporting goods and supplies in the region and was a vital maritime transportation center. Having control of Boston and the harbor was a great strategic advantage. 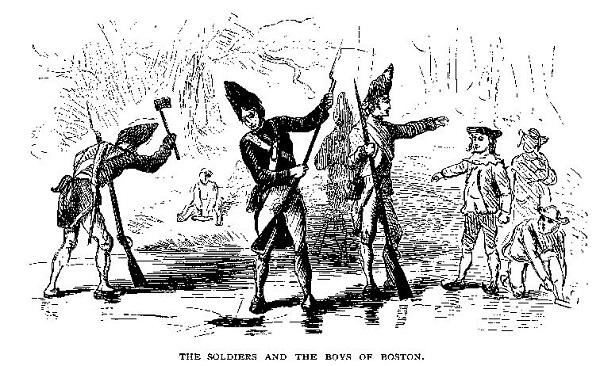 The Soldiers and the Boys of Boston, illustration, published in Our Country, circa 1877

The following is an overview of events that happened in Boston during the American Revolution:

Acts of the American Revolution:

The historic events that took place in Boston during the American Revolution were a direct result of the various acts that Parliament passed during this time period.

These acts were designed to give the British government more control of the American colonies trade industry in an effort make money off of them and help pay down the debt occurred during the French and Indian War.

Port cities like Boston were a vital part of the social, economic and political fabric of the British colonies. The various Parliamentary acts passed to regulate trade in the colony directly affected the port and merchants in Boston, which is what prompted their strong reactions and protests in the city.

The acts were also met with much resistance in the colonies because the colonists had been allowed to self-govern for so long, particularly during the period of Salutary Neglect from the early to mid 18th century, that they were resistant to suddenly give up their control to the crown.

Each new act that was passed sparked protests, revolts, riots and acts of rebellion in Boston that eventually led to the outbreak of the Revolutionary War.

The Boston Massacre was a riot that occurred in Boston in March of 1770. The riot occurred when a group of protestors showed up outside the State House in Boston to protest the increased presence of British troops in Boston that occurred after the Townshend Acts were passed.

On the night of March 5, a scuffle occurred between one of the protestors and a guard at the State House which angered the protestors even more and prompted them to throw rocks, sticks and snowballs at the guards.

The scene quickly became chaotic and the guards fired several shots into the crowd, killing five civilians. The guards stood trial for the massacre and all but two were found not guilty. The other two were convicted of manslaughter and were branded on the hand.

According to the book Historical Cities-Boston, Massachusetts, it was the Boston Tea Party which forced the British government to act on the growing rebellion, which in turn escalated the conflict:

“It was the Boston Tea Party which confronted the British cabinet with the choice of capitulation or force, replied to by the Port Act, which marked the beginning of a policy of coercion and led swiftly to open warfare.”

The Siege of Boston:

The Siege of Boston marks the early phase of the Revolutionary War and began in April of 1775 when British troops retreated from the Battle of Concord to Boston where they were then trapped inside the city by the local militiamen.

For more information on this topic, check out the following article Massachusetts in the American Revolution.

1 thought on “Boston in the American Revolution”